The wind was trying to freeze my will to continue with my journey that day. I can barely feel my hands as I try to shove them inside my pocket alternately as I try to smoke a stick  to warm my self pathetically. I can see my goal I am almost there, my heart was beating faster as I approach until its glorious self has unveiled before me, the Namdaemun. I wandered off the Namdaemun market and tried some of the local food available. I found Mandus, Onion Spring Cakes and my favorite of all the Hotteok, possibly the Korean version of our own Piaya only that it is fried and its filling is oozing as you take a bite out of it and oh good thing that I was there on  a fall since they only sell it during this season.

Eating too many of small pieces of food can be a little too much specially if you want to try all of what you see but I was craving for more. On I go to look for a good heavy meal to fill up my tummy and give some warmth. There were a lot of food stalls around the market area but I was looking for something that is not too commercial, something closer to the Korean home. 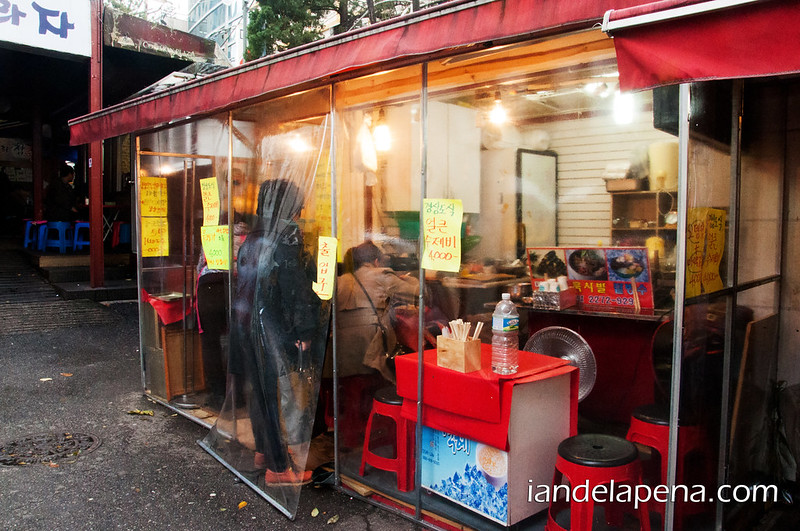 I saw one stall that looks like one of those that you’d see on a KDrama, a food stand in a tent with thick transparent plastic as walls to trap the heat on a cold weather. There was a sign posted with tape  reading, Sujebi + Kimbap for just KW 4,000. It was a bargain and just what I needed.

Funny but I was nervous as I step inside the tent, I was greeted by an enthusiastic cook busily making Kimbaps with her plastic gloved hands. She spoke to me in Korean but her gestures are enough for me to understand that she wants me to sit down on a table to be served. The tent was small that could fit just about four on a rather not that comfortable arrangement but it works. The tent was heated by a fan fitted with a heater and yes it was comfortably warm inside. I sat across a man eating the only food that she serves, he sips, no more like sucks the soup from the bowl like a vacum hungry for warmth. 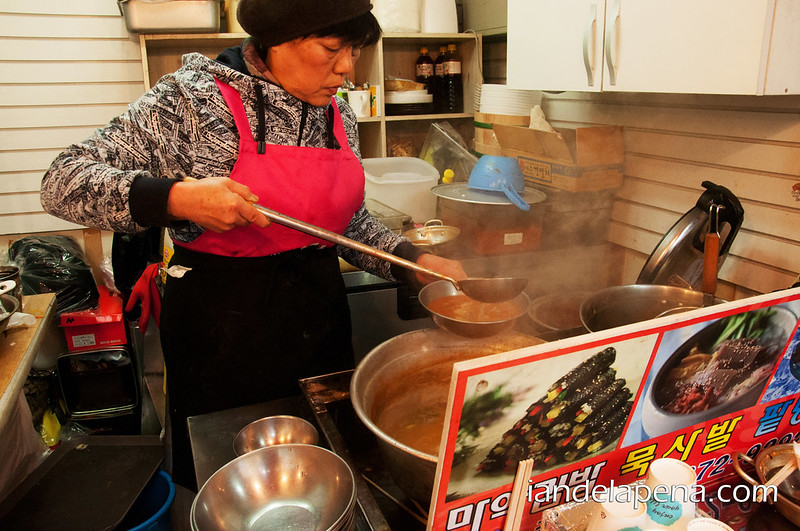 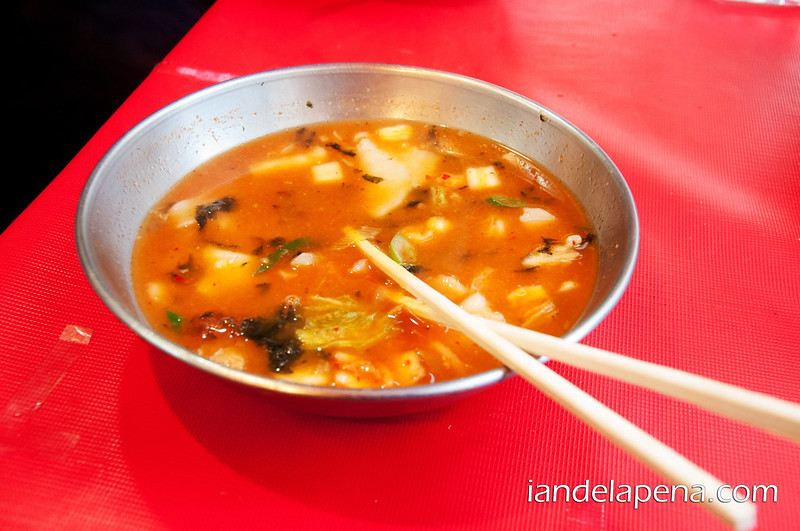 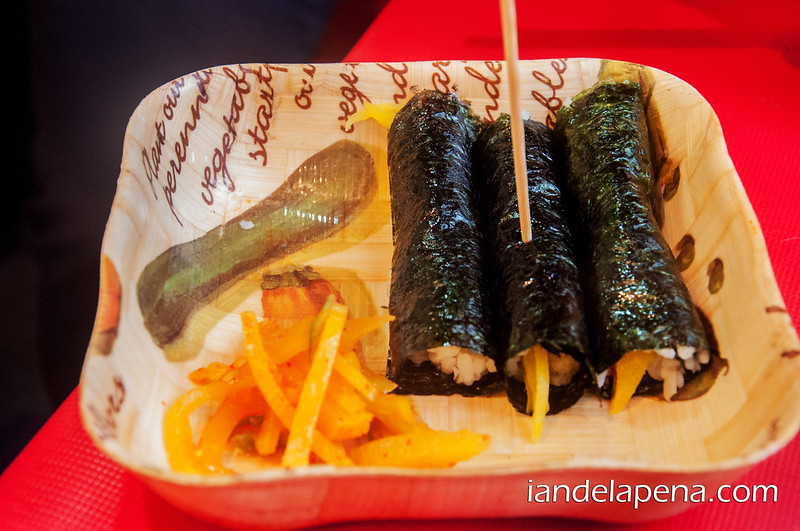 I can’t remember how I managed to order but I guess it was kinda easy coz I can’t order the wrong food since it was the only thing that she was selling (duh!!!! hahahaha) but what I know is that I was able to have a bowl of Sujebi and a some Kimbap land in front of me.

Warm and tummy filled, I decided to continue with my journey. I walked back to the main road and navigated with my handy map to my destination. I walked passed through rows of camera stores that distracted me much as I stared at the cameras that seem to be begging to be taken home. But I have none, no money to shop that grand for a new camera. 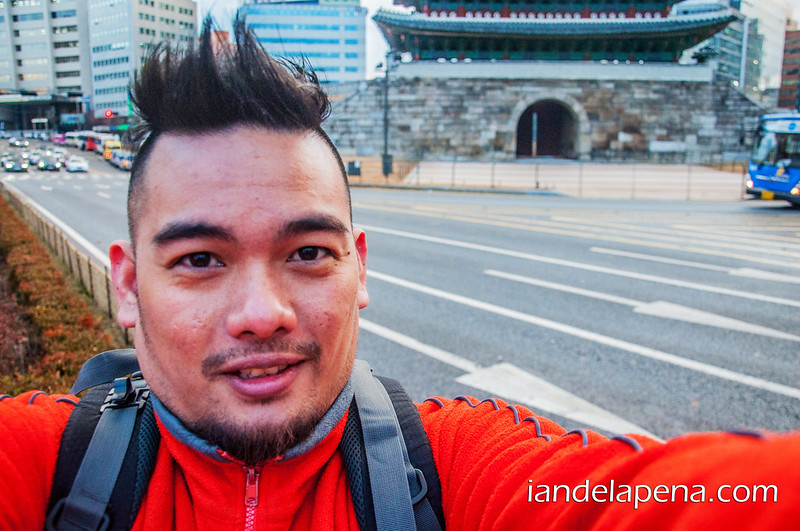 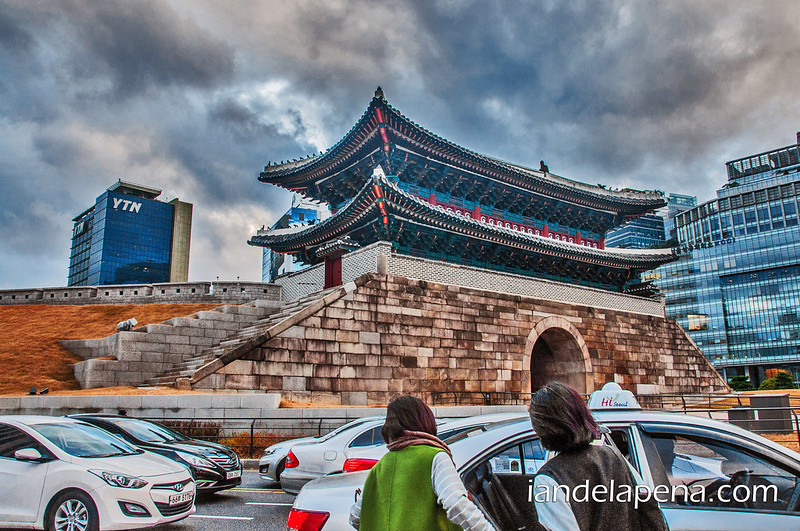 I can see the Namdaemun from where I was at, one of the important gates of ancient Seoul is right before me. For a moment there as I look up on all of its glory, it seemed that I forgot that it was cold, at least for a moment. I rarely make itineraries because they just disappoint me when I don’t fulfill them. I am glad that I was able to strike this off my list.

For some this is just going to be another structure but for history-heritage-hungry people like me, this is a must visit, or maybe at least one of the major gates of Seoul. This is where the journey to this kingdom used to start.

A Bit Of History

Seoul in the past was a fortified kingdom called Hanyang. The Namdaemun is the southern gate and is one of the eight gates from which you can only enter the kingdom of Hanyang.

In 2008 a man burned the Namdaemun, the structure of which was already 550 years old at that time. Reports say that the man targeted the Namdaemun because it was easily accessible for his protest against some land developers who had not paid him still.

How To Get To The Namdaemun

Take the subway, get off either of the two stations Seoul or HoeHyeon. From the Seoul Station you need to walk two to three block north of the station and that is it. But if you want to pass through the Namdaemun market get off at Hoehyeon station and walk towards the west. You will easily find the market as it is efficiently labeled/marked. There’s also a small tourist information booth in the middle of the market where you can ask for more help.