Barely knowing anyone among  the group of travel bloggers that I met online I found my self being more adventurous than I have ever been in my life, I said yes to a trip with someone I have been with for just a few hours. Before the reason why I started traveling solo occurred, It would take me weeks if not months before I even eat lunch with them.

I was trying to change my self and be more outgoing, that was my chance to make it happen though there was a feeling of some kind of a safety net that would prevent me feeling cornered in carrying a oh so meaningful conversation because there were other people coming with us.

The day of the trip came, we all agreed to just meet up at Villa Tortuga in Taal Batangas where we will be based for the next two days as we experience the first ever EL PASUBAT Festival while exploring the heritage rich town of Taal Batangas. 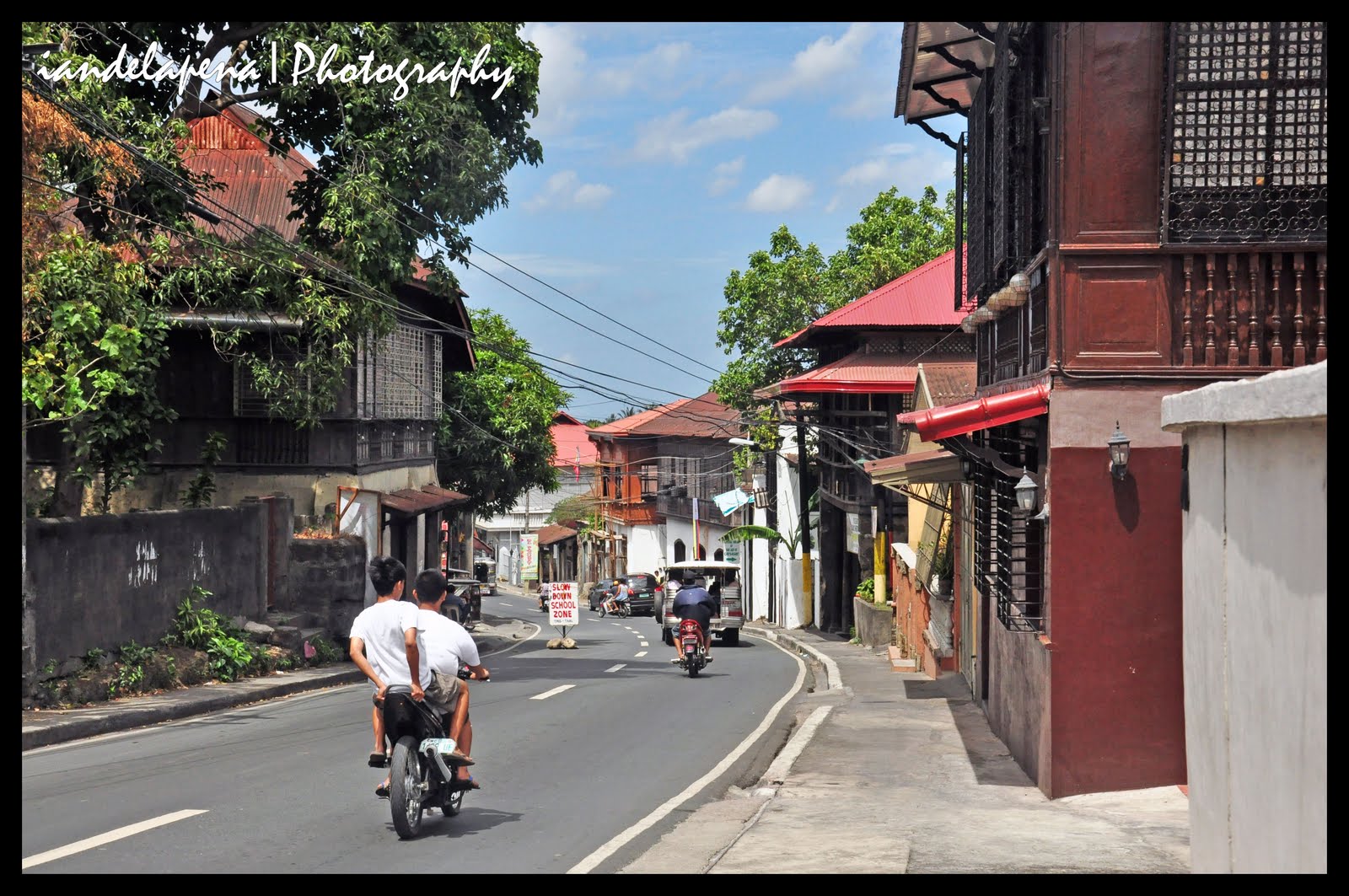 The roads of Taal leading to the town center

Night has almost covered the town but I was still navigating the roads of Taal, thanks to the tricycle driver who did not knew where the Mansion is. Well it wasn’t easy, see Taal has more than a handful of antique Andalucian type houses and I mean they have a lot! So figuring out which one was the right mansion wasn’t easy at least for me (come to think about it the driver might have played on me to get some extra payment).

Finally, after finding the mansion which we were just passing by all those time. As soon as I got settled in our room I learned that there was just two of us who confirmed are confirmed. There goes panic. Again I am a socially awkward person, so guess how was I feeling and what was going on in my head when I learned that! 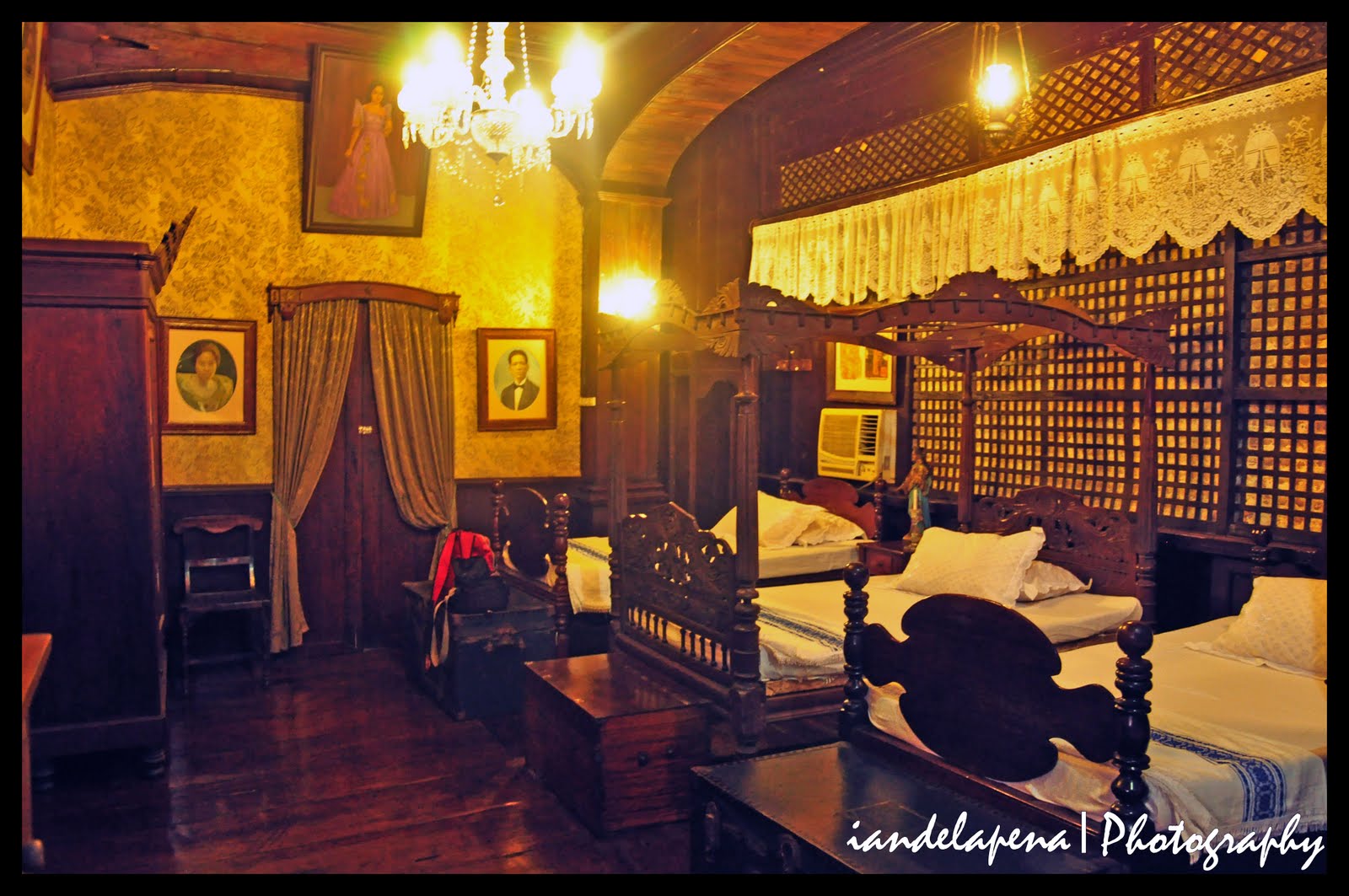 Our bed room at Villa Tortuga

The horror running inside my head stopped when I at last met my other companion that Joel  invited, AJ of the Transcendental Tourist. At least now there is somebody who will save the day if ever Joel gets bored with my stories.We went that night to the town plaza to watch the show and see some of the activities.

We also visited a local and stuffed my self up again as I was ordered to eat even if I was oh so full already as it was deemed rude not to! After eating again and touring the property owner’s ancestral house while chatting we proceeded to visit yet another ancestral house this time of a famous clan from Batangas the Alcasids. The house is beautifully preserved and merged with new architecture that it will not bother you at all. After touring the houses we then back to our base to rest for tomorrow’s festivities. Part of the Alcasid’s ancestral home Our itinerary was full the following day so we started our early. That morning we watched the first ever parade of the EL PASUBAT Festival. It wasn’t really that fabulous and all but I would say that it was beautiful with the gorgeous ladies and the cute children dancing to the theme of the festival, it was actually better than I expected as it was the first time that they were doing it. A portion of the El Pasubat Festival Inaugural Parade Lunch was served back at Villa Tortuga hosted by none other than the man behind Villa Tortuga who is also active in reviving the houses of Taal, Mr. Lito Perez. We feasted on sumptuous Filipino cuisine that was carefully crafted by the kitchen of Villa Torutuga. My personal favorite was the Sinaing Na Tawilis placed in a cup of tomato but everything was so delicious we were so full after lunch. 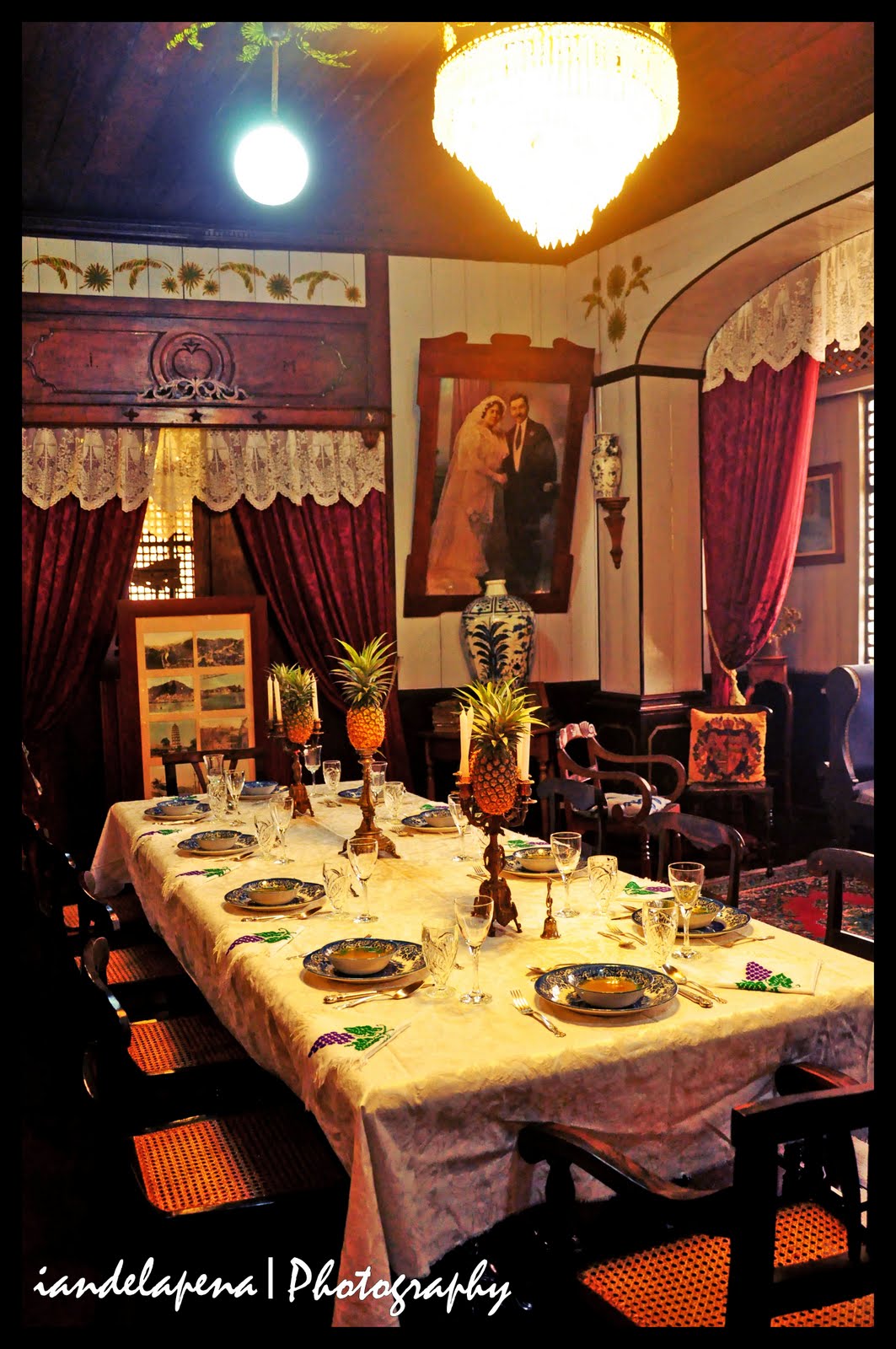 Our lunch at Villa Tortuga

The festival also has an event they call Visita De Las Casas where each house that participates presents their abodes at its best, for Villa Tortuga Lito had decided to present a mini live re-enactment of how they lived during the Spanish times. After the judges had left the house we continued role playing while taking photographs of us wearing period costumes. It was really fun and quite magical to step back in time even just for a moment. Like I said there are a lot of heritage houses in Taal, Batangas and as much as we love playing around with the costumes we also didn’t want to miss the presentations of the other houses in around Taal.  The whole Visita De Las Casas experience was lots of fun and educational as a lot of the houses are quite historical there’s just so much that you can learn while walking through their corridors. Harana this is how you get a Filipinas heart. A guy showing how harana should be done!

Taal’s history is not found just in the town it self. Taal, a couple of hundred years ago was situated just right beside the lake that was named after it. The town was originally founded on the shores of the lake but a violent eruption of the Taal Volcano forced the town to moved from one spot to another after it almost wiped out the whole town. Now, this part of Batangas is called San Nicolas who was named after their patron saint and town of Taal has relocated to the other side of the hills facing Balayan Bay. Ruins of the San Nicolas Church at the old Taal

In fact ruins of the first church that was built can still be found near the lake and if you come up really close to the walls and observe you’ll see what they mean about coral stones, I even saw chucks of whole corals stuck within the walls without even reshaping it. Me, AJ and Joel inside the ruins of the church

Since the lake was just a stone’s throw away from the church we decided to look at it and view the the majestic Taal Volcano from another angle. The Sun was nice and low so we had some fun taking silhouettes which turned out really nice.

Awesome as it was we still had two more stop so we moved on with our journey. Next up was the Church of Our Lady Of Casasay, unfortunately the church was closed when we arrived I guess that gives me a reason to come back to Taal. second to the last stop on our itinerary our last stop was a Camera Museum right at the heart of Taal.

We were so lucky to have been toured by the owner of the collection it self. The Museum showcases cameras that exhibits how the camera obscura works, yes they have cameras as old as the 1800’s and they are all working! For a photography enthusiast like me it was like camera haven, I was like floating on air and my smile can’t be taken off my face while we were being toured around. I say this is a must visit for any photography fan out there, this could be reason alone for us! The building that houses the Camera Museum

Your visit to Taal Batangas wouldn’t be complete if you didn’t see the Taal Church which is the biggest church in all of Asia. Unfortunately there wasn’t so much ambient light anymore so I wasn’t able to shoot inside the church but the facade of the church alone would already take your breath away. 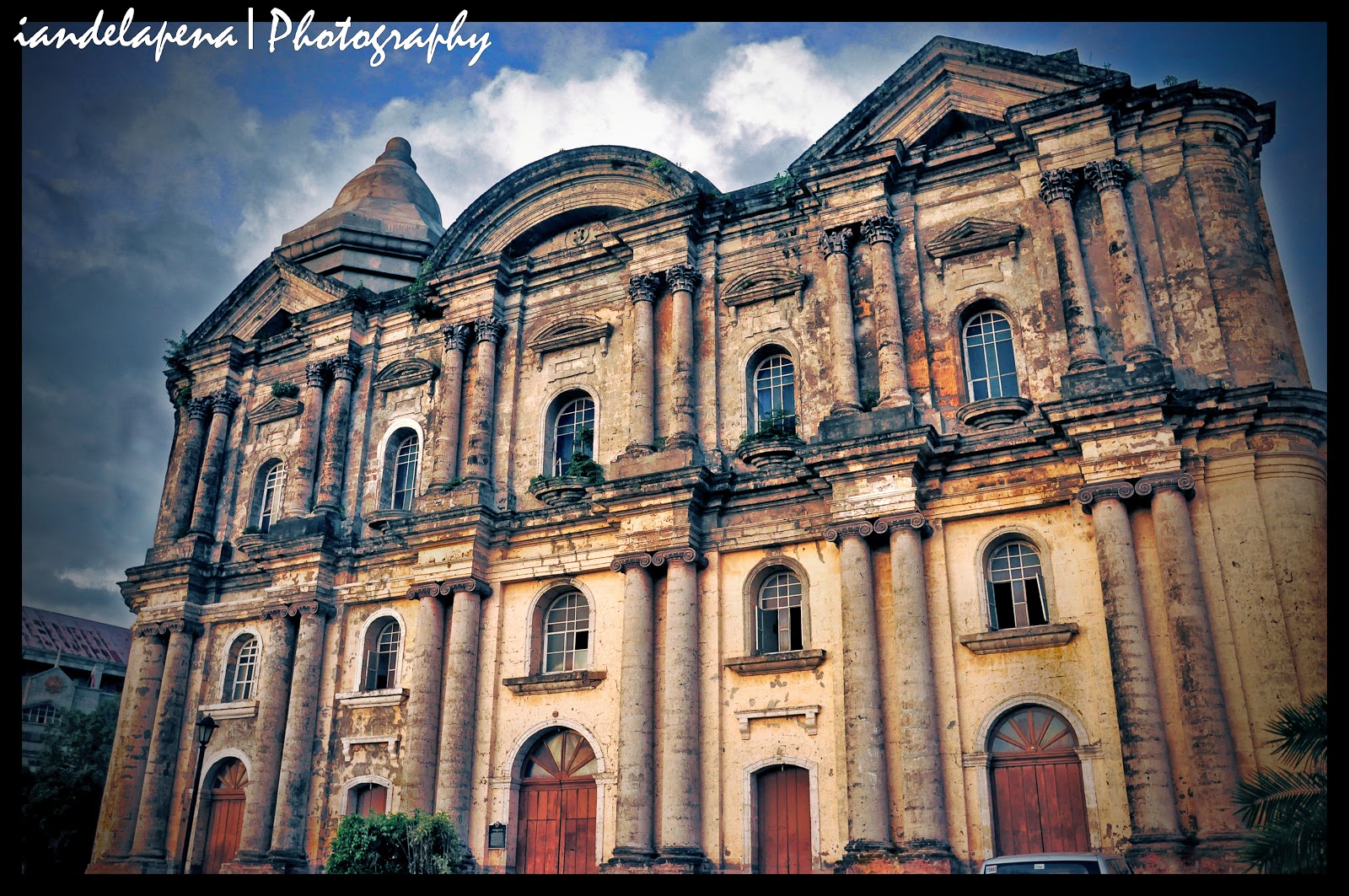 Taal Batangas offers a different vibe so far from the city that we live in and yes for those who are asking behind their head it is different from Vigan. I cannot say that it is the same as, maybe similar but not the same as the later. Taal Batangas is a living and breathing community with age old houses that still survives through our modern times. Unlike Vigan these houses have people living and using the spaces between the walls that we see. So yes definitely, visit Taal Batangas even if you have already been up north (or not) and experience the thriving heritage community that is called Taal.

At the end of the trip I gained two friends and I am glad that I braved through my hesitations because if not I might have missed this adventure and experience of a lifetime. Thanks AJ and Joel!

How To Get To Taal Batangas

Take a bus going to Lemery it will pass through the town just ask the conductor to drop you off near the plaza. You may also get off at Lemery and just take a tricycle going back to Taal.