It’s our last day. Money is really low I’ve sent my sister a message if she can lend me some then I’ll pay her when I get back to Manila. I had money on my card, it was payday but I couldn’t withdraw from any bank as none accepts my bank. It was a good think I have other bank cards with visa and master card so I need not to worry.

We can’t make a move, the unforeseen expense the week just before we left’s blow still is felt. I was contemplating if we should drop a trip to the peak and just roam around parks or other free attractions. Like yesterday it was hot so we weren’t really that pressured or eager to go out that morning. We waited.

Alas! A message came in a few minutes past ten in the morning, my sister just deposited money on my Mastercard. Finally we can move!

Dad wanted to see the second hand shops that his friends were talking about so I took him back to Sham Shui Po. On our way out of the station I looked up at the map and tried to discern any hint that would tell us where those second hand electronic shops are. Then, suddenly, I saw a photo from a thought bubble with a picture of a street and on that street I saw a signage of an electronic shop. “Apliu street” I excalimed. We walked excitedly to find out if we did crack the code on the map.

It was morning time still and most of the second hand shops aren’t really established shops but are rather  street vendors, it was more like of a flea market. It was too early, these markets usually liven up with people late in the after noon till night time. We roamed around and tried to look for some other interesting things that we can find till it was noon time. There were some more vendors who are starting to setup their shops but something wasn’t feeling good at this point, my stomach.

I asked dad for us to each lunch already. I was really hungry because we didn’t each much that day. I saw this restaurant that offers Taiwanese dishes, I missing Taiwan a lot didn’t think twice and just walked right in. The signage outside with photos of what they offer had prices and it was really cheaper than most of where we have eaten. 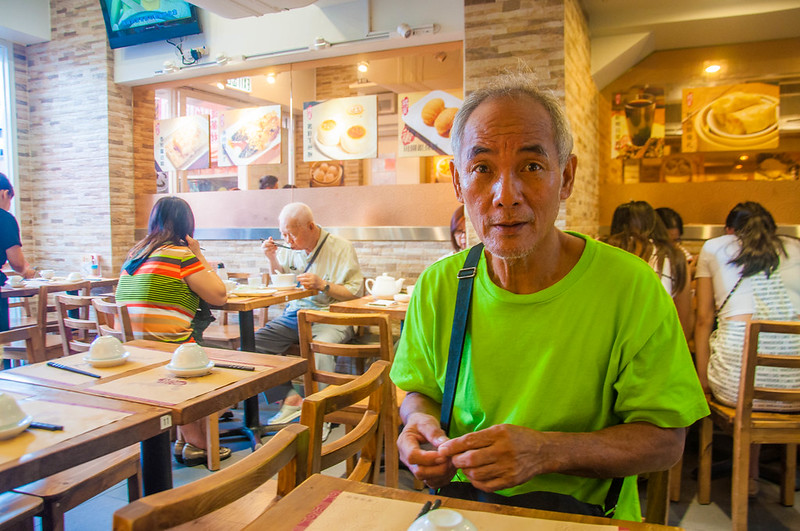 Their menus are written in English so at least we know what we are getting. They gave a us a slip where we could place our orders, this is something that I like in Hong Kong. You get to fill up a form where they have all of what they offer are written and you get to tick them off your self to place your order. Then you take your slip to the counter next to the door so you can pay just before you leave. I like the system but I don’t know how to read Chinese. As soon as the lady gave us the slip, while she tried to go back to her post I did my best to get her attention “Wo bu hui shuo zhongwen!” (I don’t speak Chinese) It the best phrase that I can think of, I didn’t knew how to say the word “Read” hahaha! She got my point so no problem. I can sense how important was it for her to do more for her job so I quickly pointed my fingers to the menu uttering “Zhe ge” in each item.

It wasn’t that long before our orders came in I had beef toppings on rice while dad had pork. We had another dish that I can’t remember what it was called, but it was like a crunch noodle wrapped in thick sticky rice wrapper that you have to dip in a soy sauce like mixture. It was definitely yummy that dad even ate his entire slice! 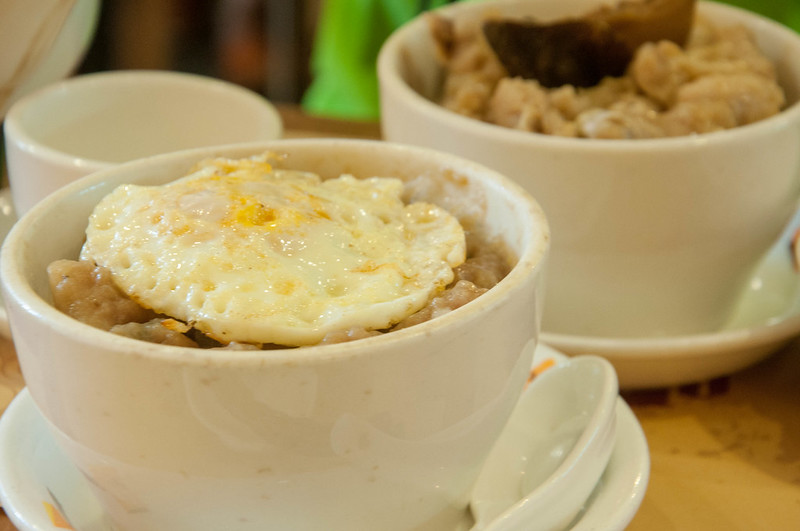 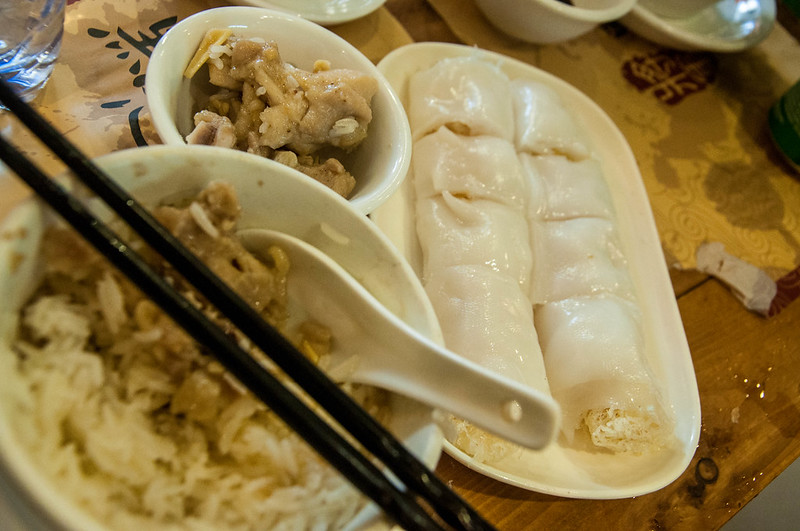 After lunch we took our way off to go back to Tsim Sha Tsui. From the subway we walked who knows how far from the the subway station, all I know is that my feet are starting to hurt already. But we are up for more walking around for the rest of the day, I didn’t complain.

The Star Ferry Terminal is located on the northern end of the Cruise Center. Luckily we didn’t had to wait for a few more minutes as we caught the ferry that was about to leave. I choose to take the ferry going to Hong Kong island as it was an experience it self. The scenic view was exceptional as you depart from the busy suburb of Kowloon going to the upscale business district of Central. 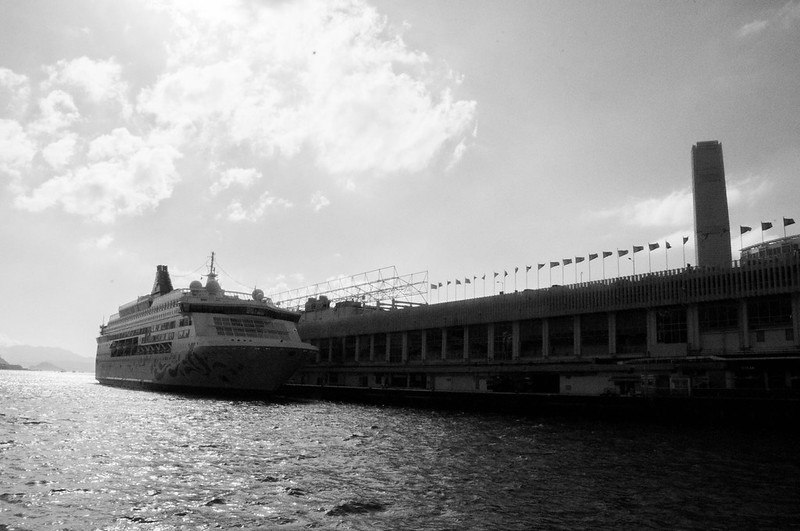 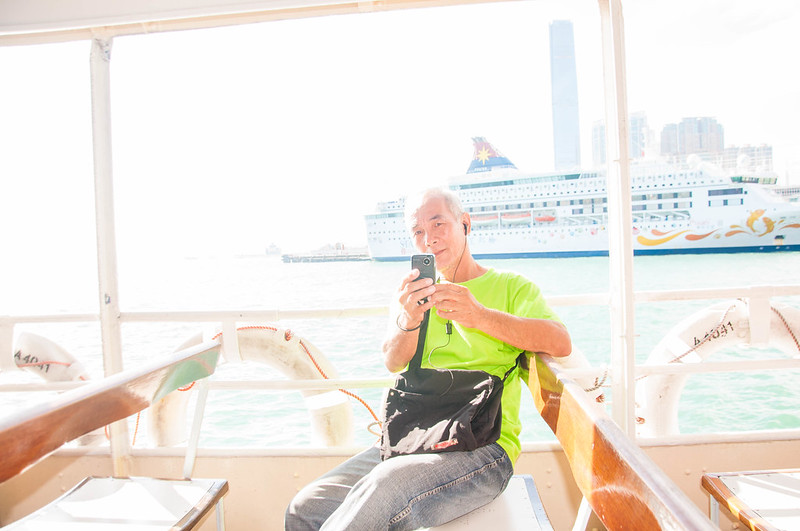 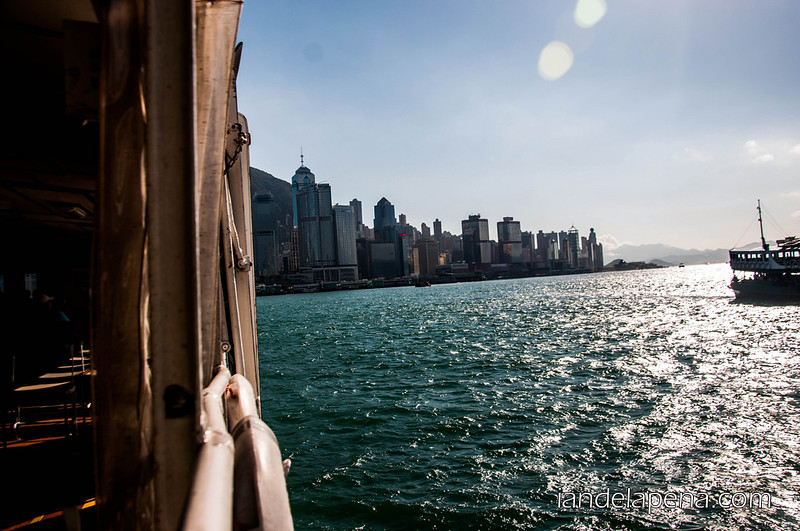 Armed with a map we navigated the streets of Hong Kong island from the ferry terminal going to the Peak. The map seem to have mislead us in a way, it looked like it was just a short walk but I was wrong. The uphill terrain was  a challenge for me (I’m fat) and dad (old) but I don’t regret taking this route. It was a good walk. We were able to see the historic and famous buildings of Hong Kong, those who defined and meld what Hong Kong is now today. 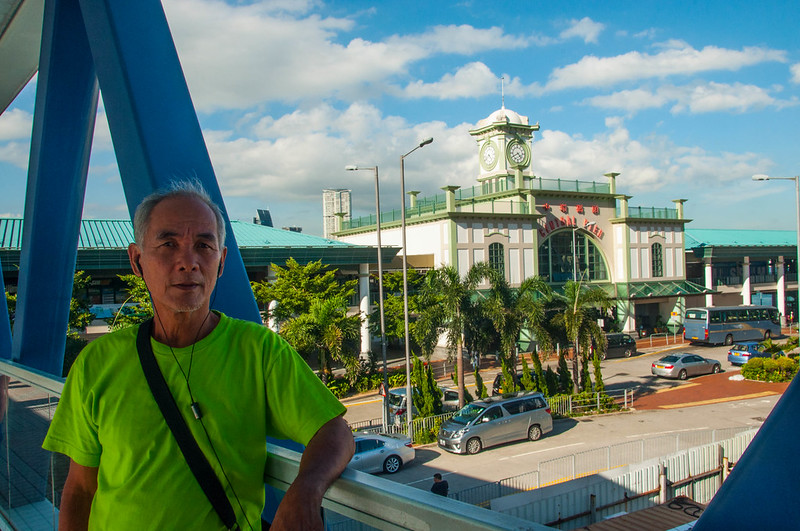 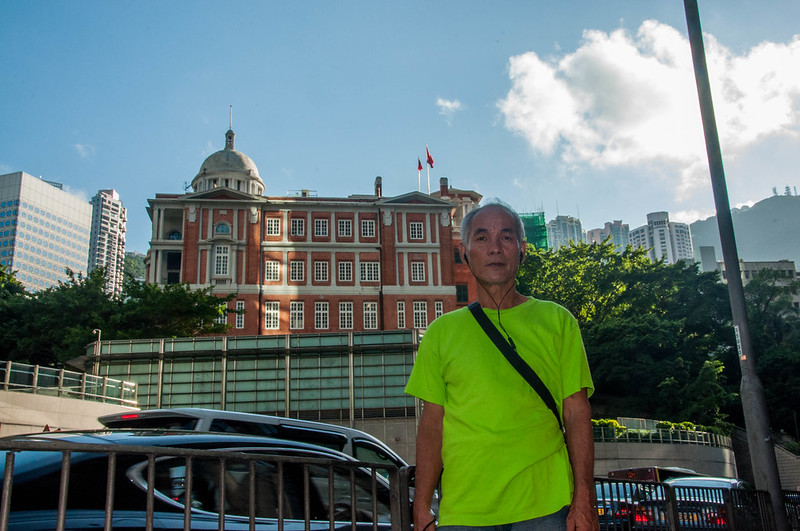 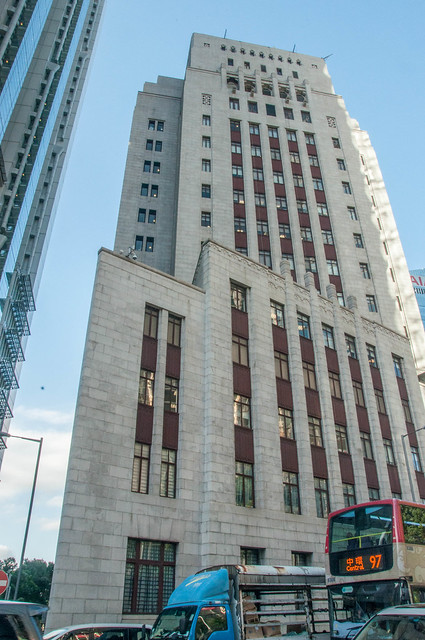 There was a long line snaking around the building where The Tram going up The Peak can be found.  We almost lined up the wrong cue, good thing we asked around first. There were a lot of people, which actually caught me by surprise. According to my research the best time to get to the peak was in the after noon between 4:00 PM till about 6:00 PM as there would be no lines to cue it’s just you and the peak. It must have a been a fluke or I was just really jinxed. I mean that many of people, all unrelated to each other, saying the same thing can be wrong right? Anyways it took us over an hour before we could get to the board. 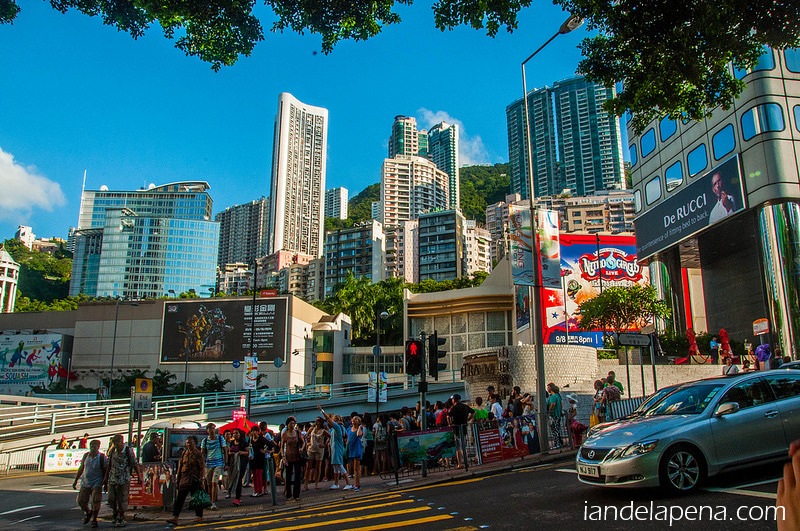 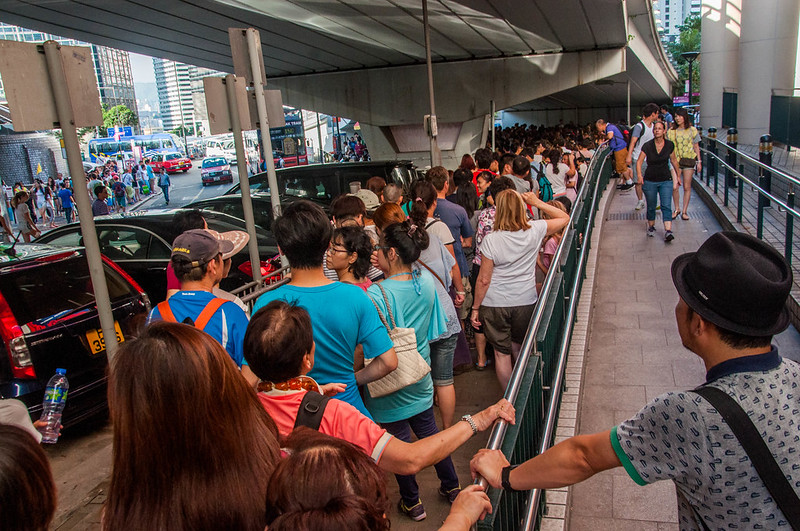 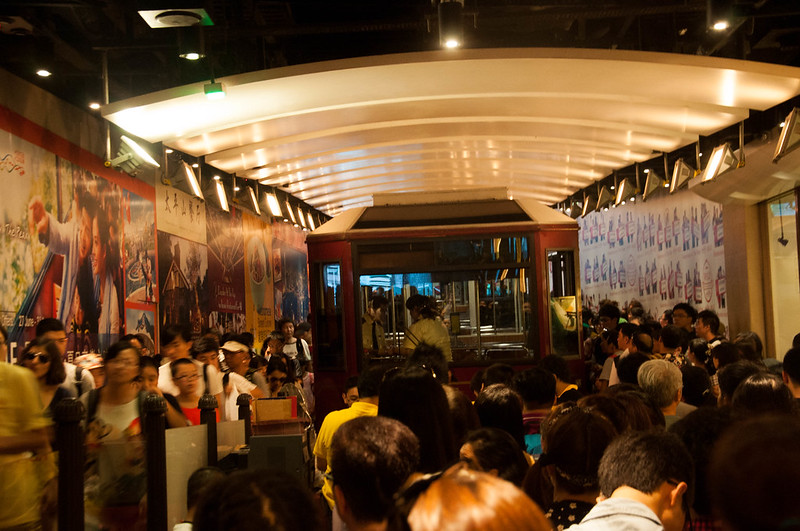 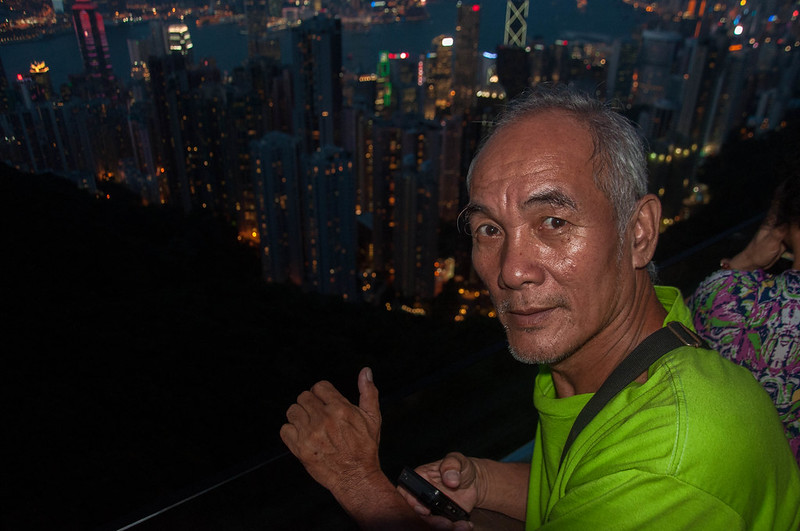 The trip going up was worth the wait! We were treated with a spectacular view of the island going up, I’d say that it is almost better than the view from the peak, almost.

At the end of the tram line we alight inside The Peak building it self. We worked our way up through a series of escalators. I wasn’t really sure if we were on the right way, so I asked the staff at Madame Tussaud’s and was directed to go further up. The stairs lead us to a door that opened to the Sky Terrace. I was kinda disappointed because it was small and crowded, but my determination didn’t falter. I was there to take a post card photo of  the down town area of Central Hong Kong. 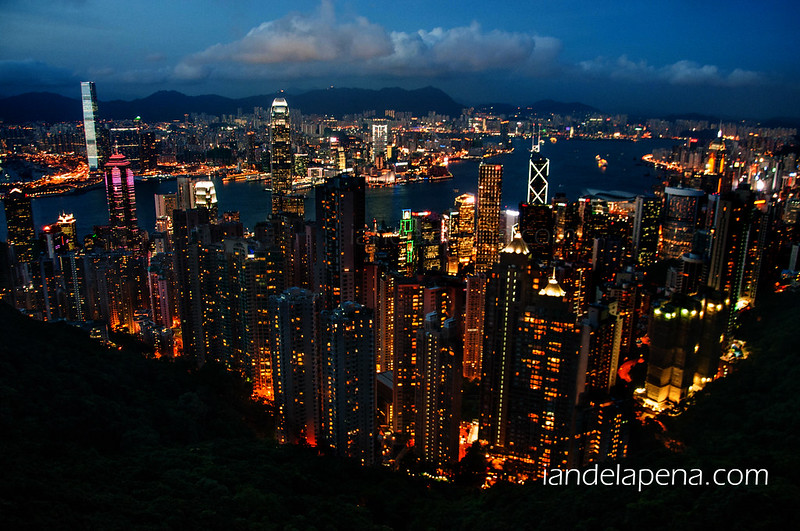 As soon as I got my shot I called dad so I can get his photo taken with the sky line of Central at his back. It was a challenge keeping that spot, fortunately we got what we came there for. I don’t know if I look Chinese or something but there were several people who insistently tries to talk to me in Chinese, I’ll reply in English, then I’ll here them say “Shuo yingwen” which means to me that they got that I only speak English. Anyways we went back down and lo and behold! Another line to board the tram! We can’t use the Senior Citizen trump card because in Hong Kong you have to be 65 to be considered as a senior, so no express lanes or consideration for us. awwwww. We. Waited. In. Line.

Going back to Kowloon, we took the double decked bus going down to the  ferry terminal. It was a great ride going down to the star ferry terminal on top of the bus. With the wind blowing on your face and the buildings seem to be staring at you. It was a no brainer  decision to make, we took the star ferry going back to Kowloon. It was a different experience with with the lights on the buildings seem to dance in through the night. 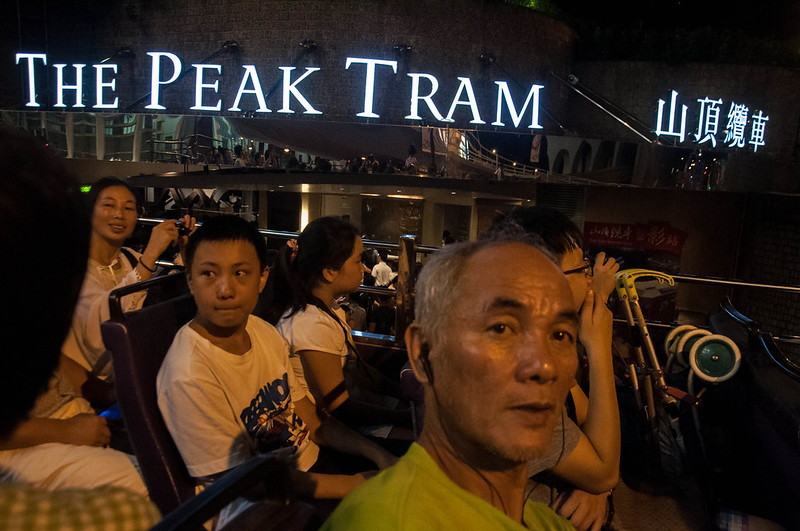 As soon as we set foot on land on the Kowloon side, I asked dad if he wants to have dinner at the night market in Temple street, I wanted to but my feet are dead tired so I checked with dad first. He declined, without hesitation as I concurred. We just ate at a nearby restaurant from our hotel.

It was our last night. Though we missed some of the places in our itinerary I still felt like we had a great time in Hong Kong. We were able to maximize our budget while experiencing the fundamental things of what makes Hong Kong the Asia’s World City. 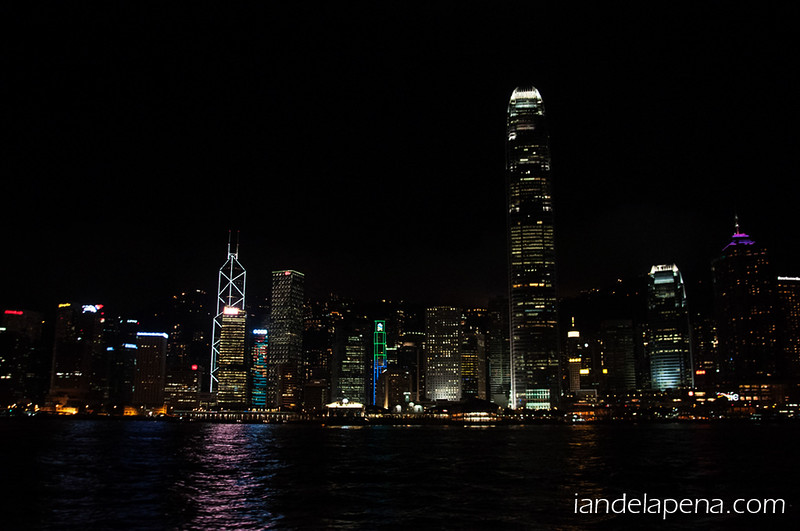 The bus ride back to the airport the following morning was reflective for me as I take my last look at the city where I had brought at least one of my family at. I said to my self that I will come back armed with a better budget and do the things we failed to do. I say Hong Kong is an experience that you will want to do over and over without regret as the city is as unique as it could get each and every night.

Off we go back to reality we call Manila.