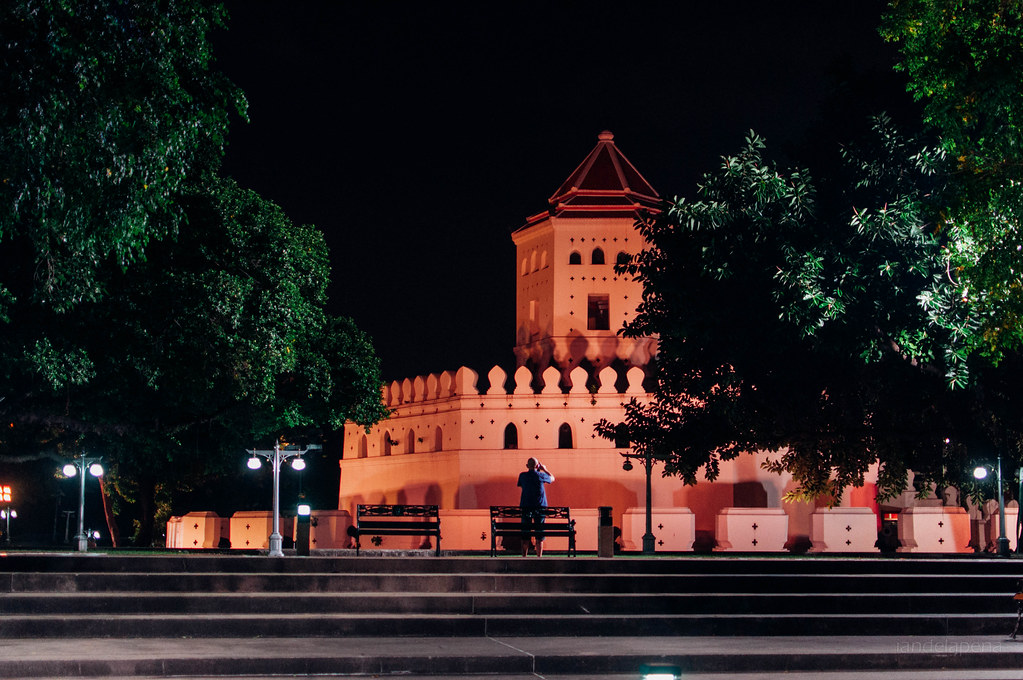 I am not looking for something that I think would get sensational. I look for something that feels so mundane that makes you feel as if you are a local yet so beautiful. It wasn’t something huge that people should start flocking, like I said it was just beautiful. As i walk towards the edge of the park and into the banks of the river an breath taking view dawned unto me. The magnificent Rama IV bridge at a distant. 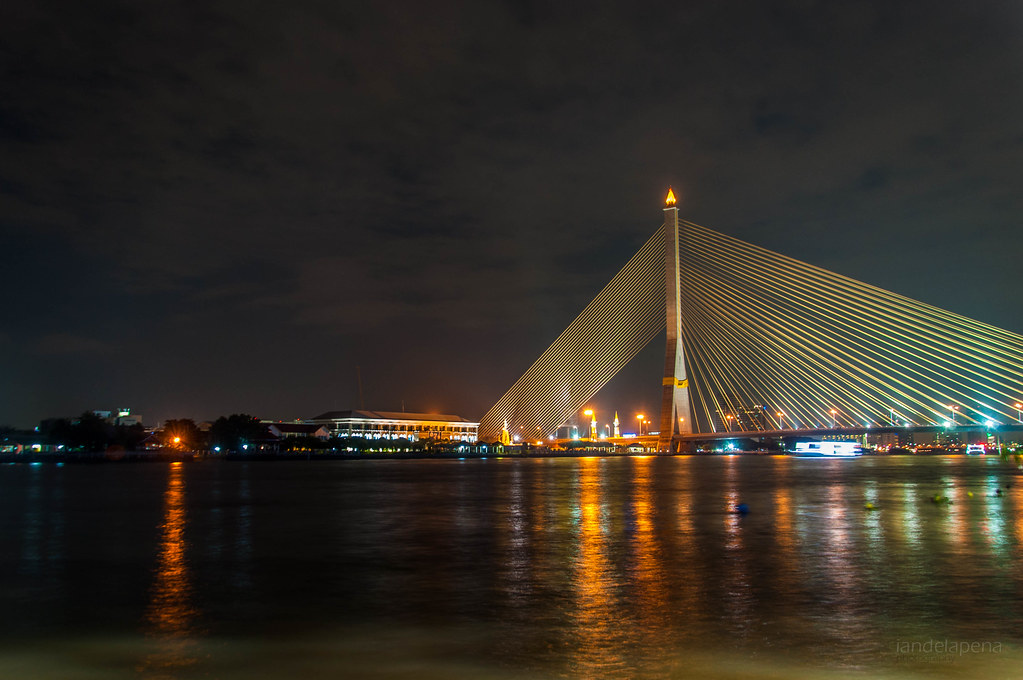 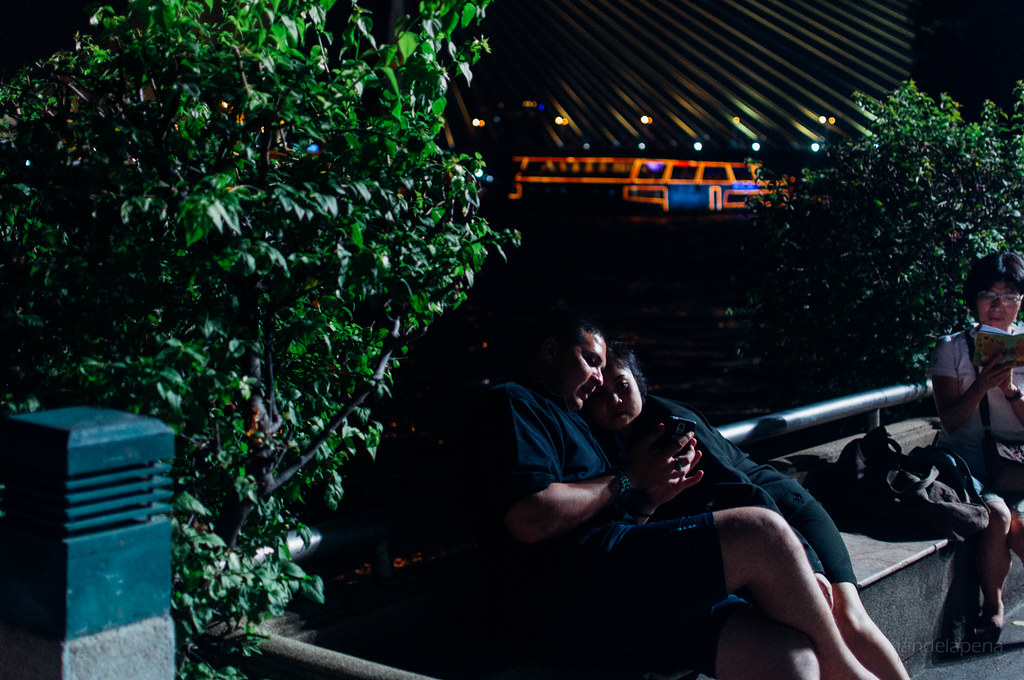 Spending about a few minutes in the park was awesome. Looking out at the bridge gave me some sense of realization that, hey Ian, You are here! You are finally backpacking across southeast Asia, this is really it!!! On the left side of the park is a beautiful pavilion. It was off limits though. Maybe it’s an important structure of some sort but I didn’t find any markers on it. 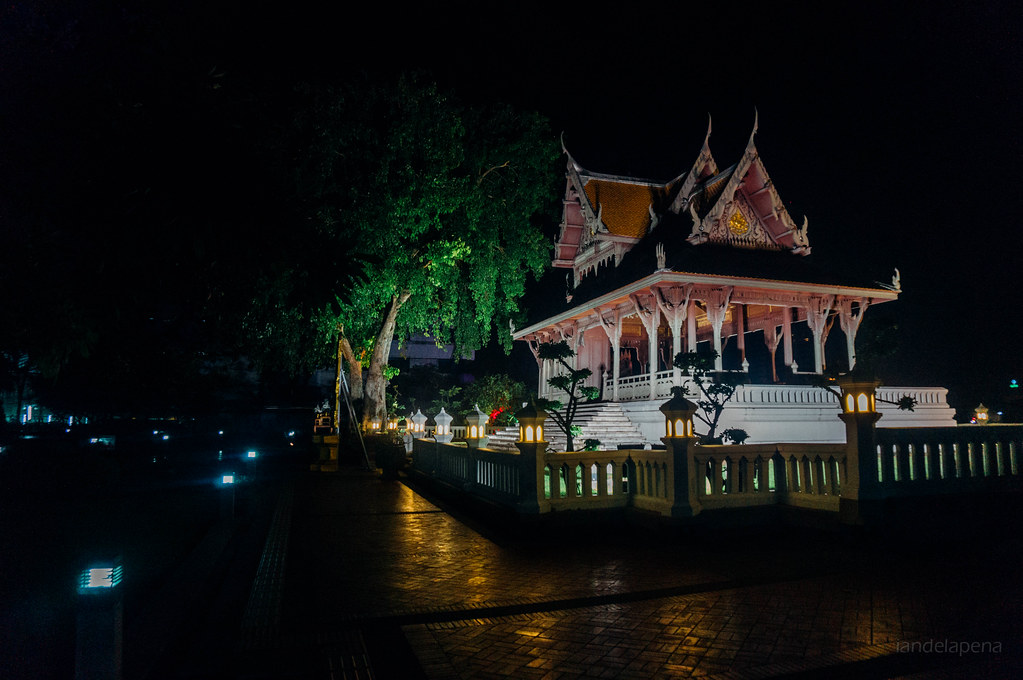 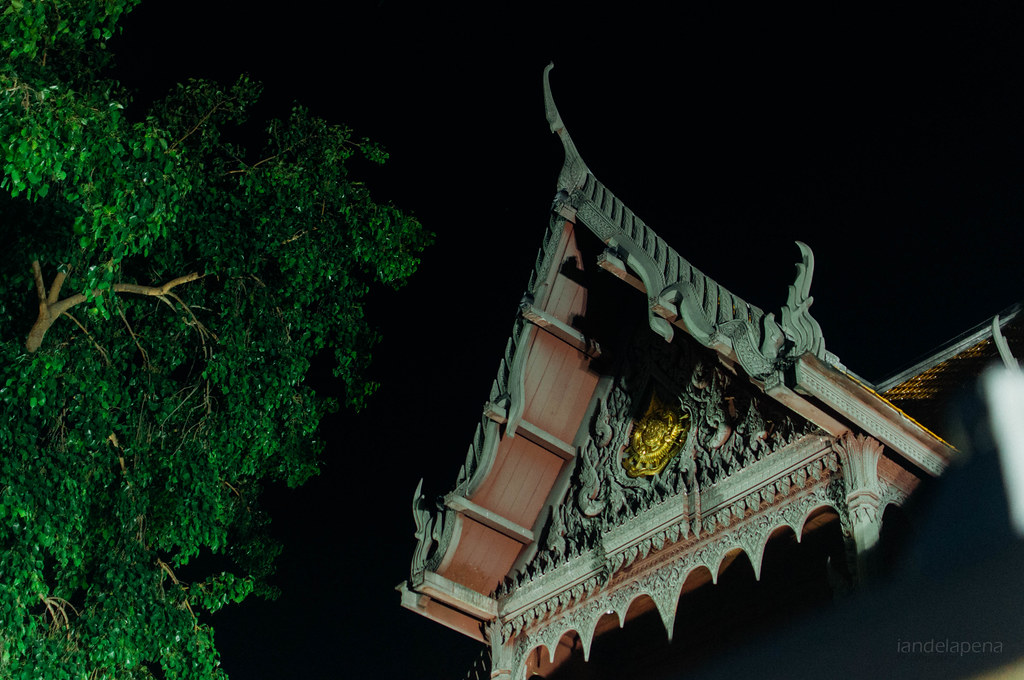 It’s amazing how you can forget that you haven’t had food yet for so many hours and that you are actually hungry when you see beautiful places.  Until you remember you are hungry. Hahaha!  I decided to move forward and continue walking on the street that I was at. There was nothing much going on in that area and I was really hungry. 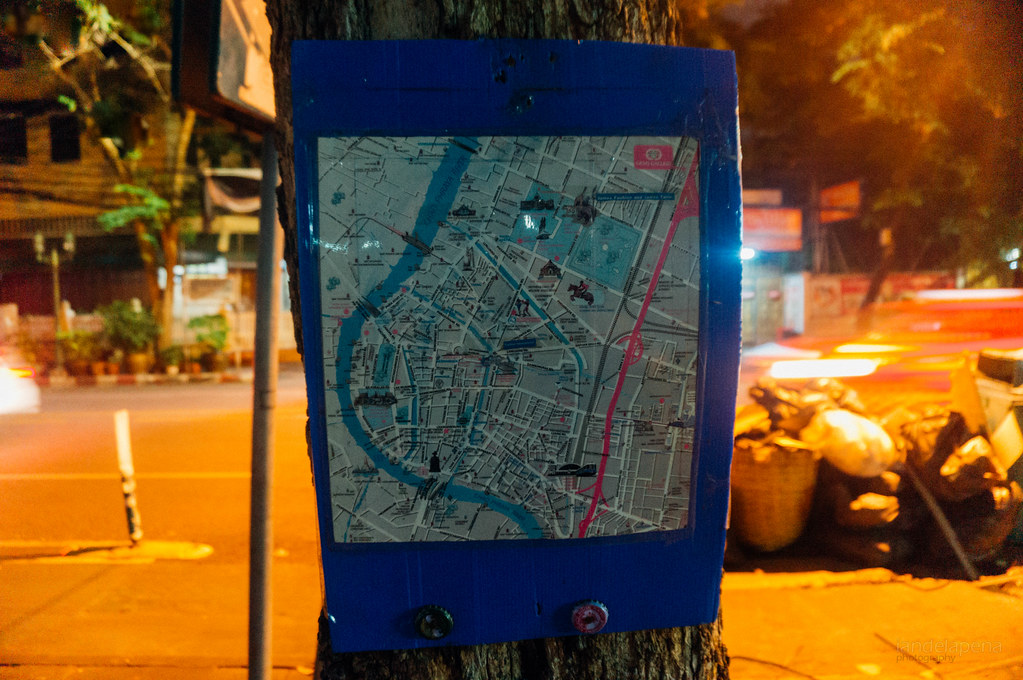 A few meters more I found a map! At this point I’m not that familiar with Khaosan road’s geography yet. The hungry kid inside me said, look at that freaking map that’s posted out of no where and get your self some food! I learned that I was just still a few hundred meters from Khaosan.  I tried to navigate the streets to Khaosan but somehow I got unintentional lost this time. I found my self surrounded with loads and loads of food stalls. It didn’t feel like it was Khaosan, I said to my self. I searched for street signs, that was quite difficult, and was surprised to learn that I am on a food street called Rambuttri road.

I really didn’t knew anything about this street. All I cared about was Khaosan road and its party scene. But then Rambuttri for was better. It has proper restaurants and bar that you can step in. As for a budget traveler like me, there lots of street food options where you can eat on their sidewalk setup chairs and tables. From soups to main dishes till you crave for something sweet for your desert, you’ll find everything here. 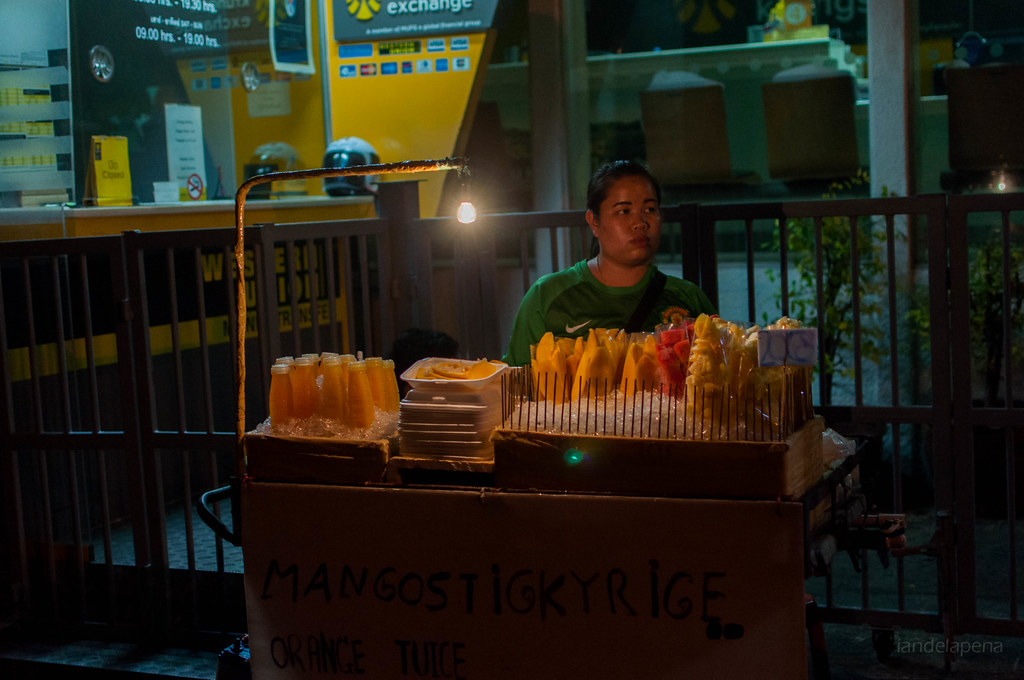 Almost at the end of the street, I saw an interesting stall. A mix of familiar ingredients but completely new way of preparation is presented. It was what I have been waiting to taste on this trip. An authentic Pad Thai. I’ve tasted Pad Thai before from a Thai restaurant in Manila, but I want to taste an authentic one. The sight of the stall stopped my foot and held my breath for a good few seconds then had a good deep breath.

I walked right up to her stall and tried to order one. It was a challenge. She could barely speak English and I had no clue how to speak Thai. But she did knew her ingredients. I think she assumed that I want to order Pad Thai (it was her main product) and started asking me if I wanted shrimp or pork and if I wanted it spicy. 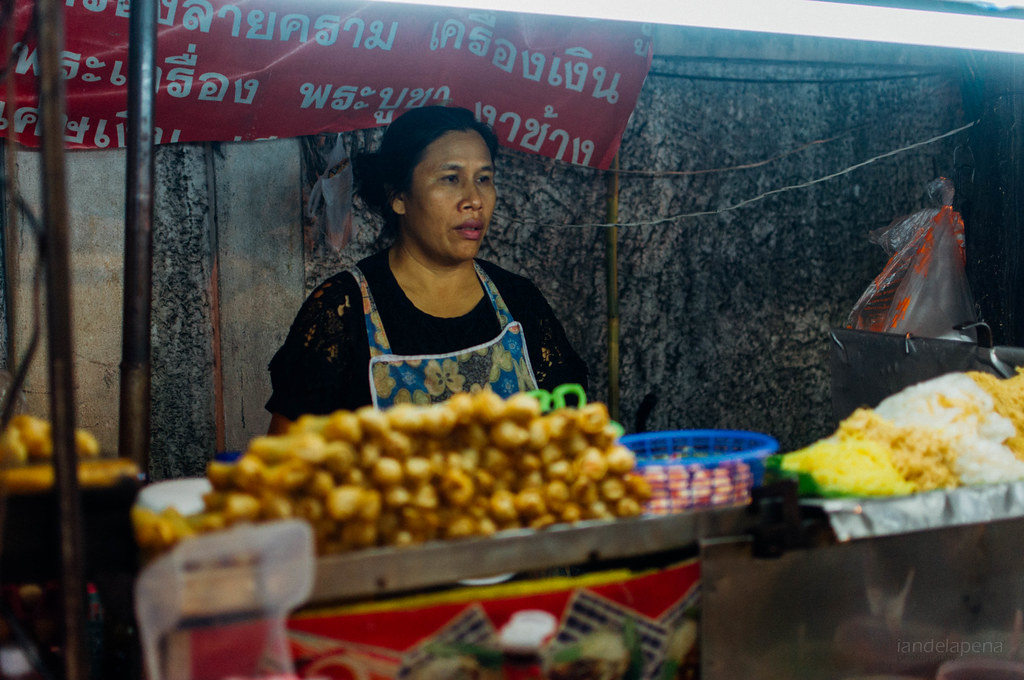 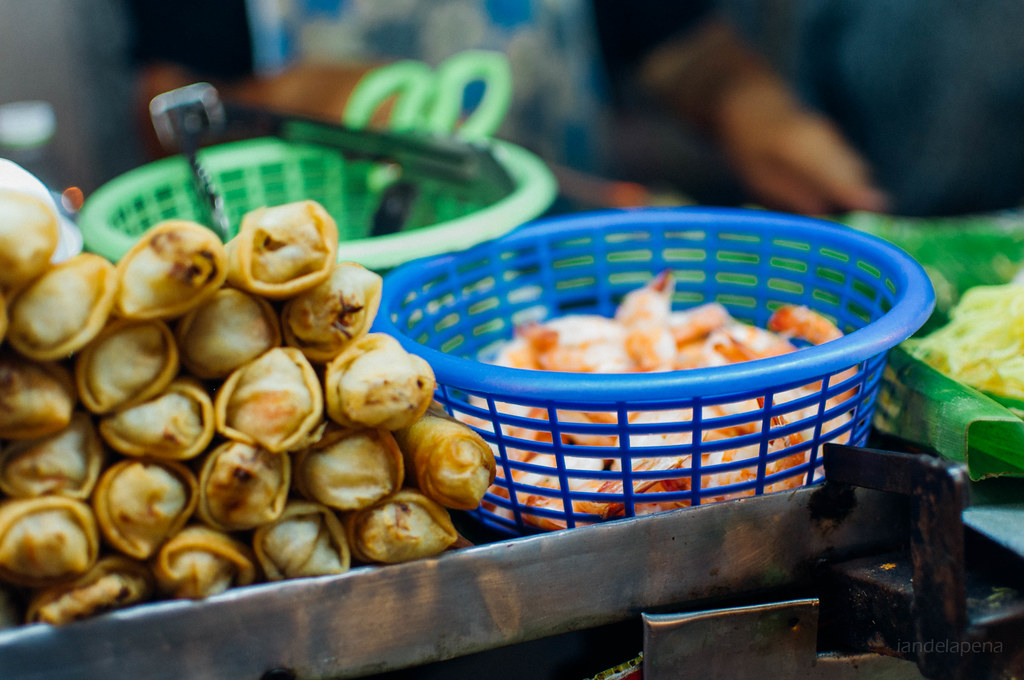 She asked me to sit down and wait as she tosses my food to be cooked on her flat pan. The smell of it was so fragrant that it build up my excitement and anxiousness to finally taste a real Pad Thai. A few minutes later she handed me a plateful of Pad Thai goodness. I felt overwhelmed with how much Pad Thai there in that plate all for just 45 Bhat.

A medley of rice noodles  spices pork bits and vegetables tossed together in a flat pan. It was a feast for my eyes. I could have taken a million photos on my phone before I actually started eating it. I mixed this concoction of goodness to evenly spread the spices. Smoke was still rising from the dish complimenting the bright red spices adorning the dish. 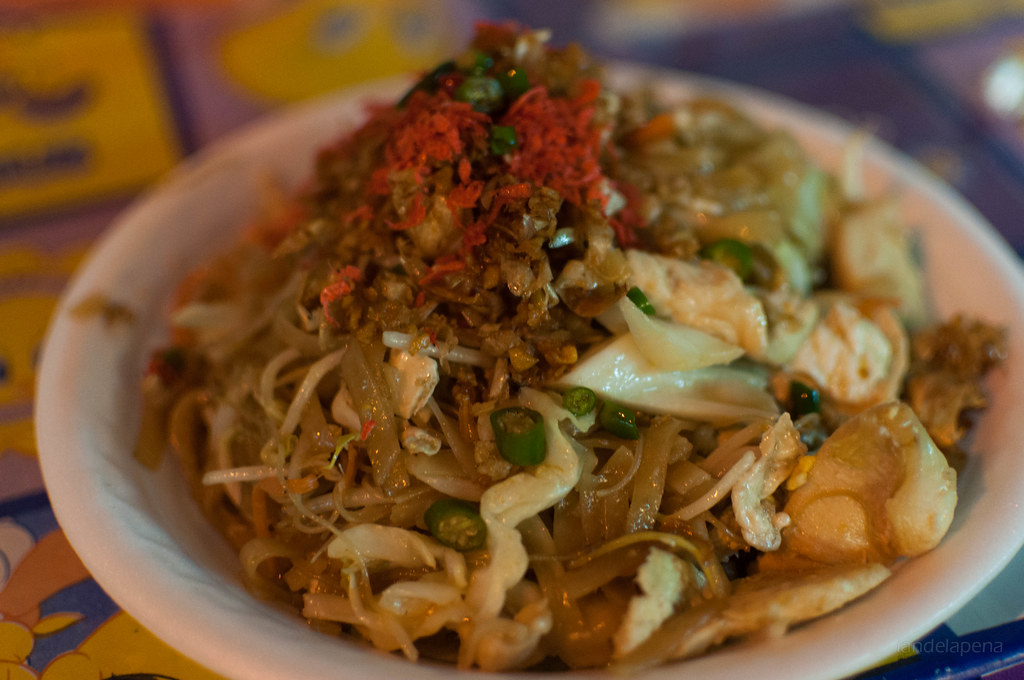 The Pad Thai experience was just awesome. Better than expected. I might just got lucky that I found the Pad Thai lady. But the night still is young. I walked through the whole Rambuttri street. Apart from food, there are stalls that sell clothes and souvenirs. One stall caught my attention, it was selling Muay Thai clothes. I was really a fan of the sport but it was just too expensive, so I gave it a hard pass. 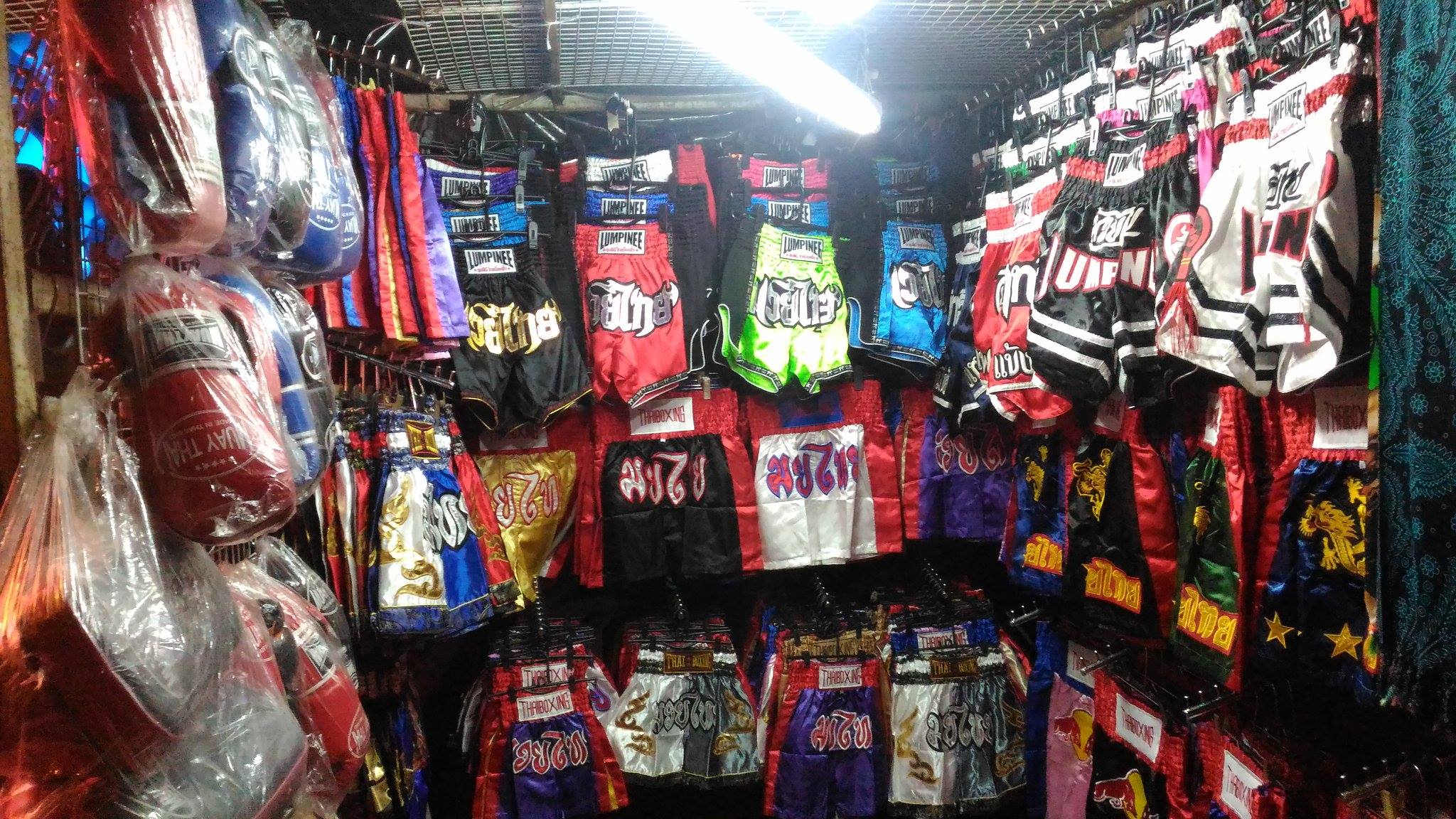 I took a right and followed the flow of people. My instinct was right. There it was, the center of the backpacking universe as they call it. I have seen the street already that day but it was different at night. The vibe was so alive like everyone has no plan of sleeping until they’re drunk enough to pass out. It was electrifying. 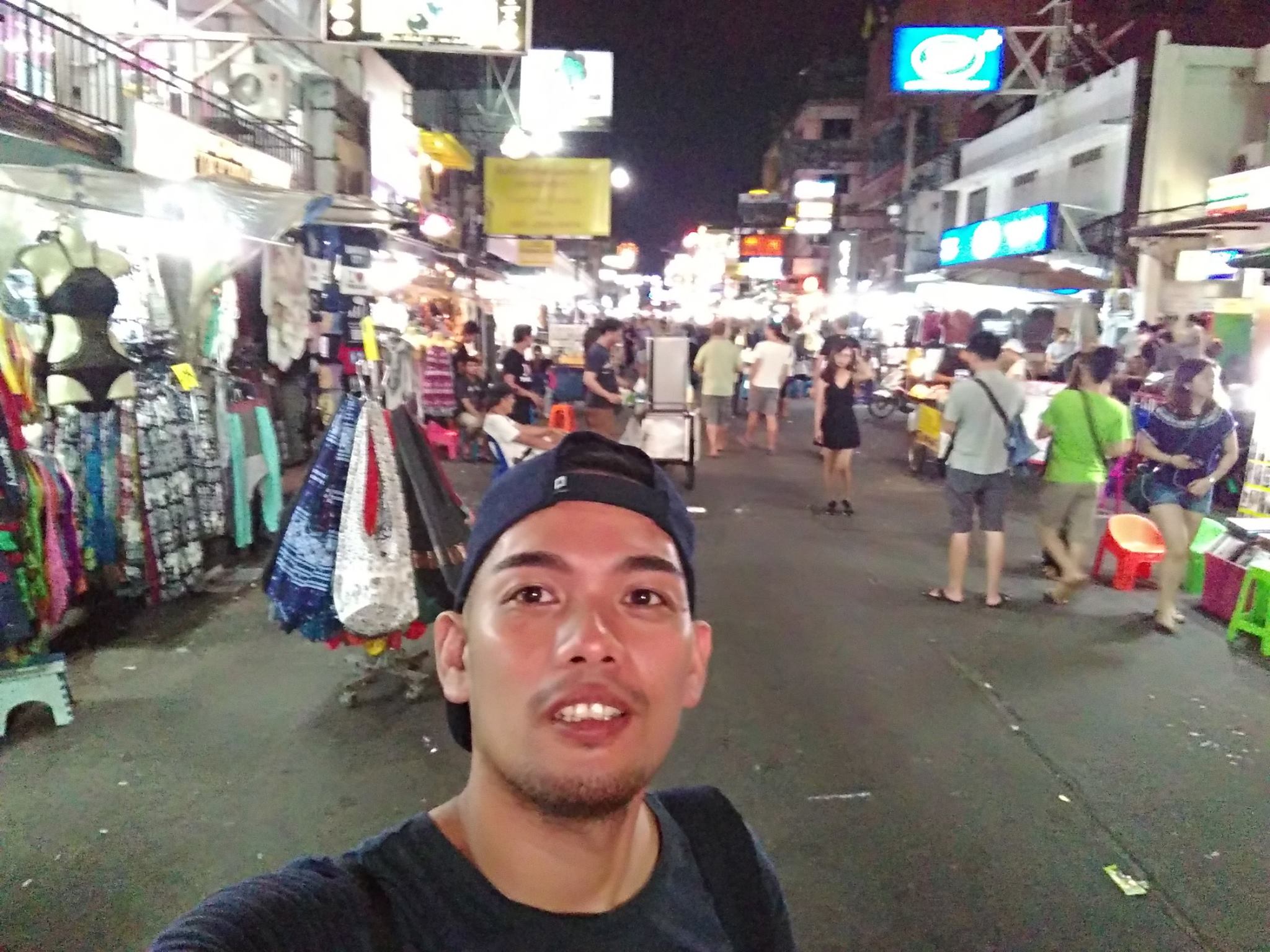 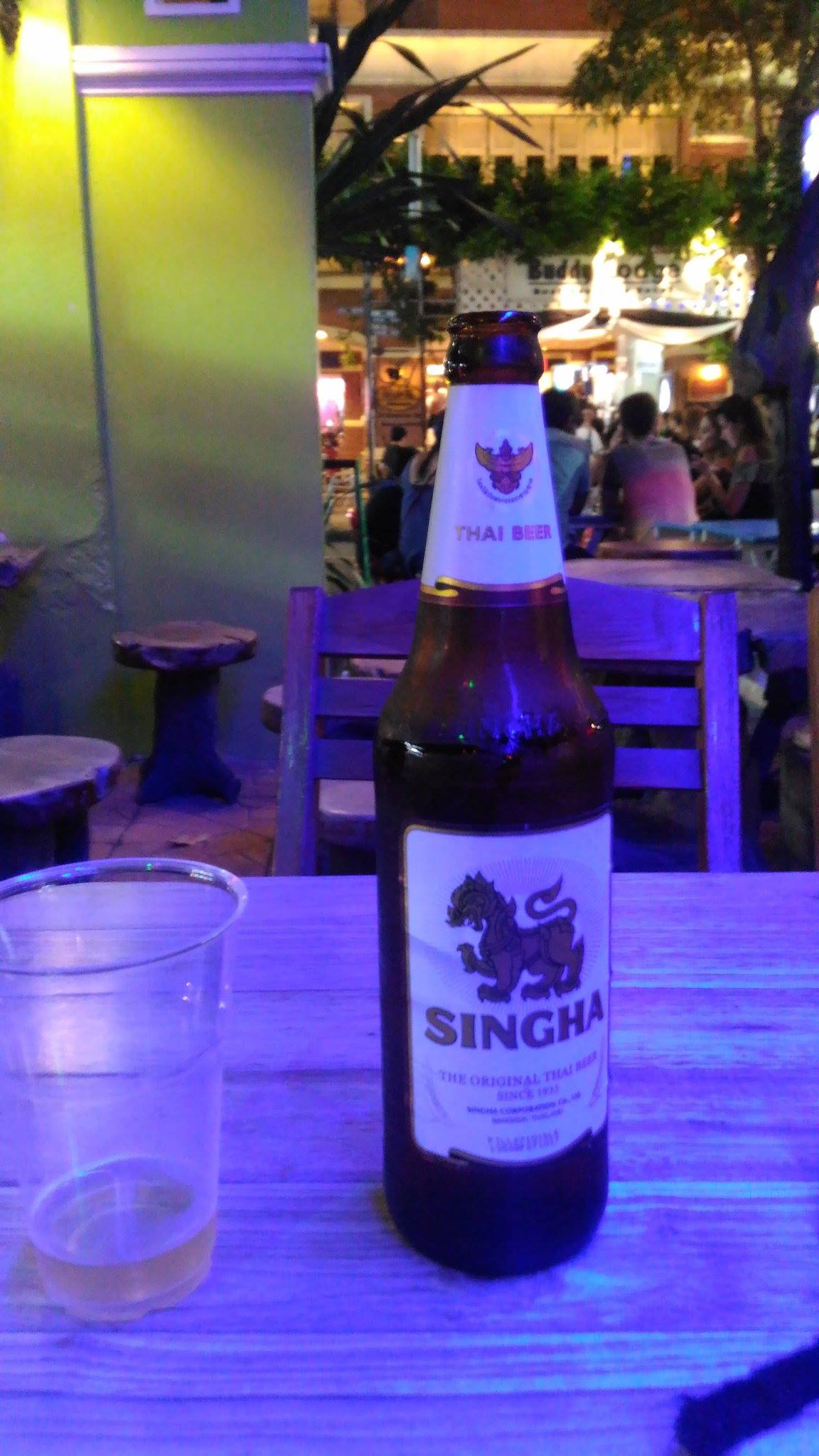 I’ve always seen my self hanging out with travelers on this street but I’m only staying for a couple of days. It was too short to make new friends and the French Canadian guys in the dorm I was staying with weren’t really into making friends. I paced back and forth Khaosan to find a good place to sit in by my self and just have a beer or two and watch people. I didn’t want to be in the loud bars -gahd am I that old already? lol – and found a nice calm atmosphered restaurant.

I sat and ordered a bottle of Singha and just watched other travelers pass by. Some just arrived others leaving while others seem to be lost in the crowd finding their hostel. Khaosan road maybe a bit too much for some people. Others may say they hate it deeming its so much of a cliche. But Khaosan road gained its reputation for a reason and being at the crossroad of the backpacking universe is just one experience a backpacker must have at least once in their lives.