I’m glad that I started my trip in Seoul by meeting with a long time online friend Anton. We’ve been communicating for a while already even before this trip, incidentally Anton was there in Seoul  as well for a trip so we decided to meet up. He was actually on his last day and will be leaving for the airport that afternoon.

After finishing our late lunch at KFC -Hey don’t judge too quickly they have meals that aren’t available in other countries too! 😉 – Anton took the lead and started walking going to our agenda for that day, Coffee Prince’s 1st Coffee Shop! We were amazed on how Anton navigated the streets of Seoul, as if he had been there before and I even asked him if he’d checked the place earlier and was just being nice to us by taking us there, but no! He really is visiting it for the first time!

After several minutes of of walking we’ve finally reached the shop. I was really overwhelmed with emotions that I just stood there and took a good few minutes of staring at the coffee shop. As soon as I pulled my self together I started taking photos. I’m sorry, but it was really so dreamy for me, I’ve followed the series from start to finish and even watched it several times over the net. 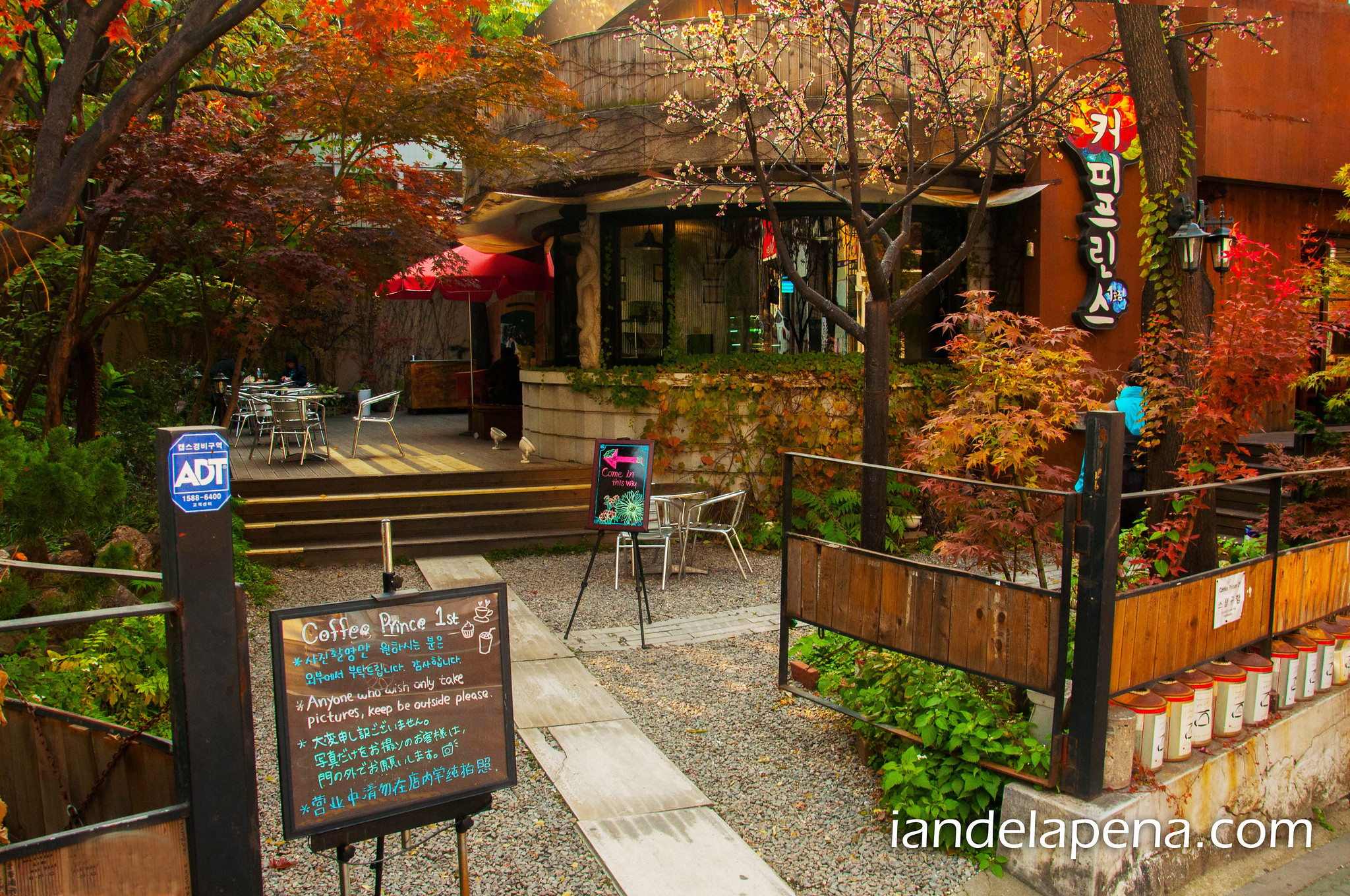 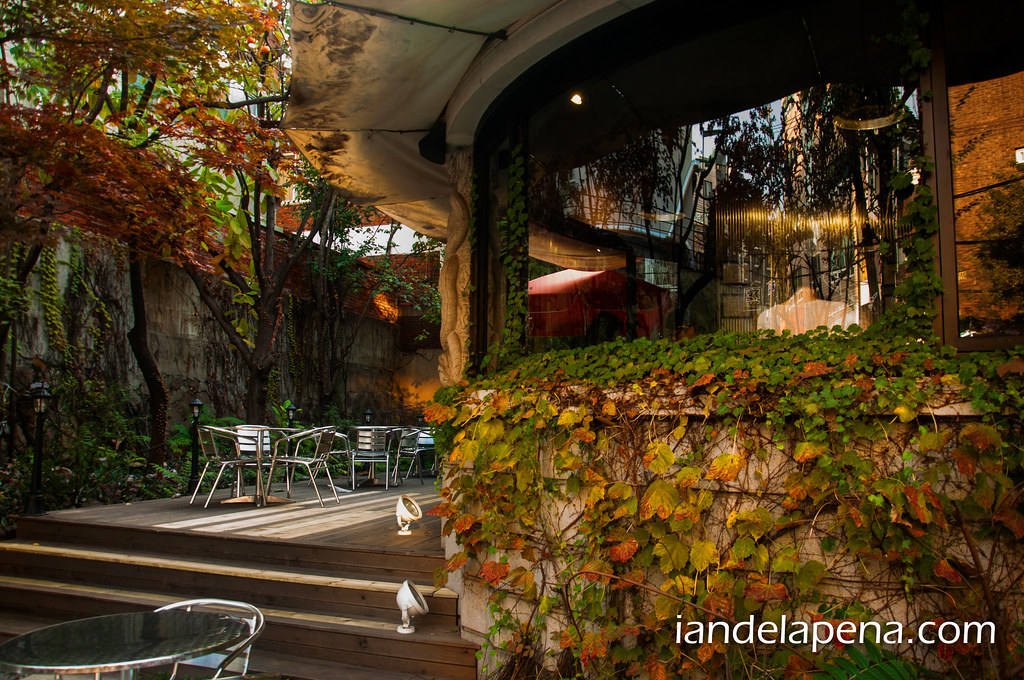 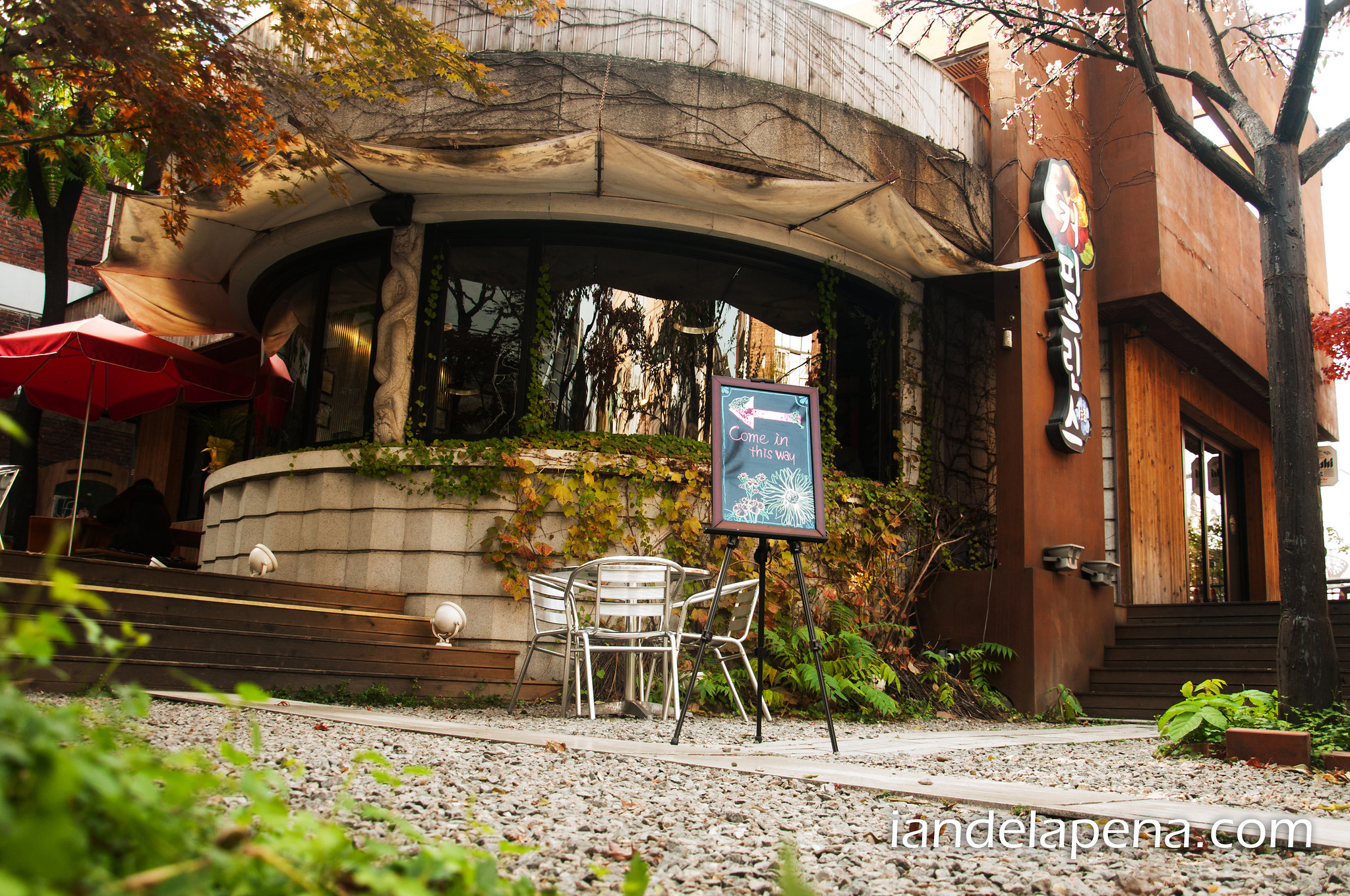 I really loved the atmosphere that day, It was the first time that I experienced autumn and it was exactly how I pictured it to be (at least for the first couple of days LOL!) the colors of the trees, the crisp cool air it’s just a dream come true!

We were a little hesitant to go inside because as far as my research says that the shop doesn’t allow any videos or photos taken inside or you might need to buy a drink before you can take any photos. I wasn’t quite sure if I want to order food or drinks as well because going back to research every one says that they are over priced and doesn’t taste good. But Daisy -my hostel mate- is determined to go inside, apparently she’s a fan of the KDrama too! So she just walked right up and entered the coffee shop so I of course I excitedly followed her inside. 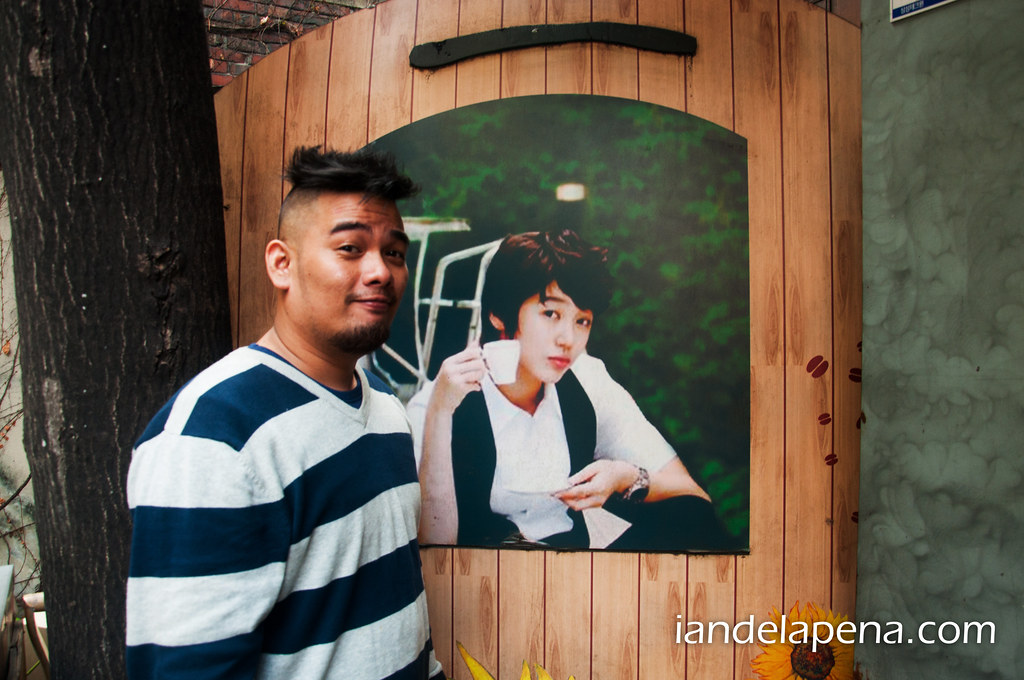 As I walk towards the door I saw a photo of Go Eun Chan and of course I didn’t pass the chance and asked Daisy to take a photo of me and my Chan =) . Stepping inside the coffee shop was like walking inside a KDrama… well its their set… but it’s like I am dreaming awake that time. It was everything how I thought it would be (minus the food and coffee) they were able to preserve the set it self and yes you can use the bar where the gang usually prepares coffee and roam around the cafe as if you reminisce the good old days… hahaha yeah I did that as if I was part of the drama! hahaha! We wanted to sit on the table next to the window and the flower painting but they were pretty strict with the sitting arrangements and told us that it is reserved for a minimum party of seven, so we settled for the one in the middle of the cafe. There, we shared our travel stories and where we want and plan to go everything that we can just think of. truthfully I have never felt such a traveler before until I have been with these people in that conversation. I was like hey I can finally relate! hahaha! I mean I have spoken with a lot people who travel but I really never connected much mainly because I don’t know that much yet. But being there at that conversation at that very moment, it felt like wow… I can travel the world! Hahaha… and Yeah you guys out there are my inspiration… A lot of you are! 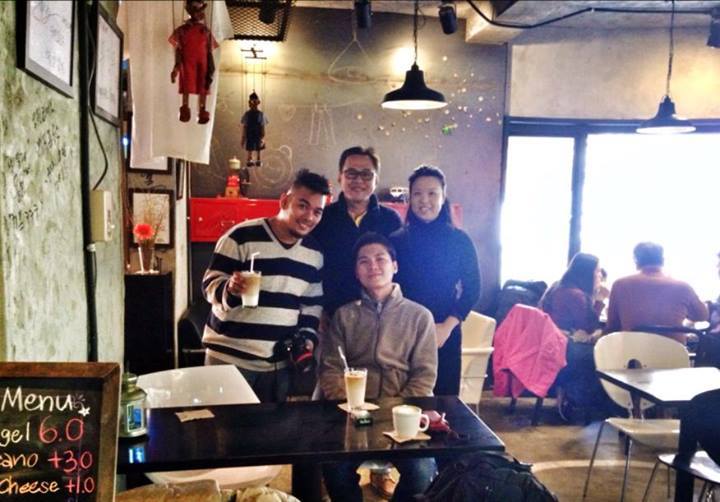 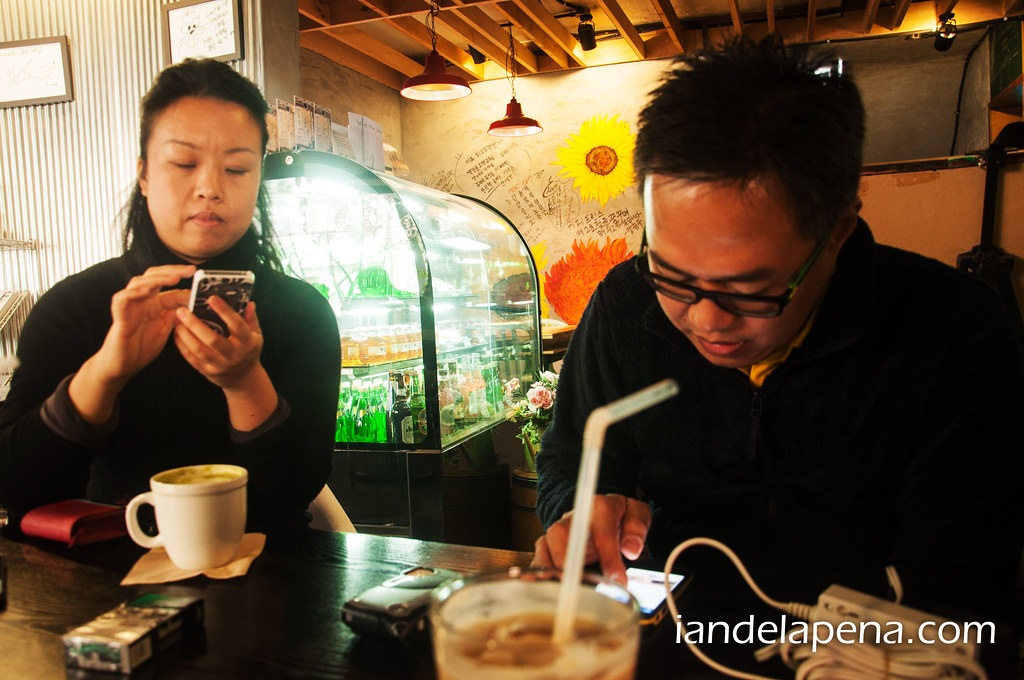 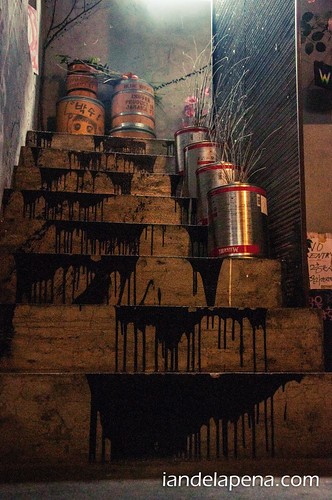 I wanted to experience the cafe entirely so I roam around some more, unfortunately the upstairs were closed and off limits. there, Choi Han Kyul and Go Eun Chan often talk about things and I really like to see where they usually hang out but like I said it was off limits… Bummer!

The weather was great that day so I decided to go out and the things I usually do whenever I hangout at my favorite coffee shop here in Manila. Ian, Anton’s friend joined me outside for some smoke. We are both coffee lovers…. or was it just me? Anyways what I remember clearly is that he hated his drink because he specifically ordered his latter HOT but he gave him iced! Well I don’t know if it was incompetence or language barrier… hahaha we’ll never know…. I asked him if he wanted to have it exchanged coz I’ll gladly have them replace it for him but he opted to just stick with it. He look pretty pissed though… hahaha… poor Ian. 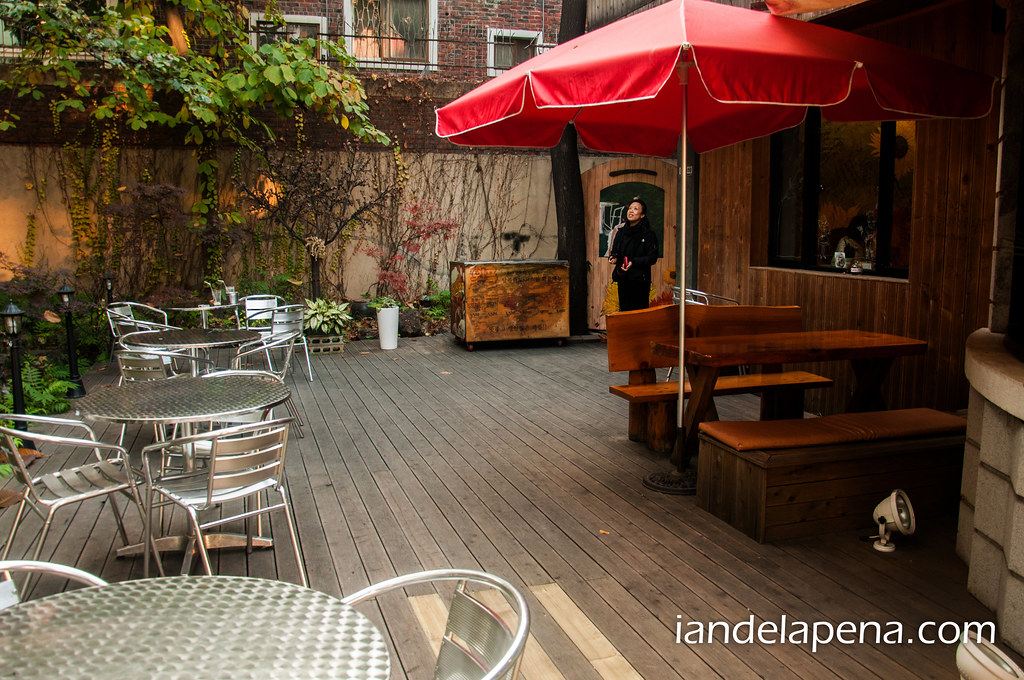 There’s really nothing much to see or do in the coffee shop unless you are a fan of Coffee Prince. I mean as a fan just being there is really something already it is like putting a kid in play land…. well that’s basically how I felt that time… pretty lame yeah but I am sure that Coffee Prince can totally understand me… hahaha… So if you aren’t a fan who might wanna think of skipping this one, though I’m pretty sure that your friends who are fans would be very envious of you having pictures from the shop! Weigh your options carefully! hahahaha!

Side note: While writing this post I have been thinking on how on earth will I put all the photos that I want so here are more photos!
[AFG_gallery id=’1′]

So How Do You Get to The Coffee Prince 1st Shop?

How to Get There: Take Subway Line 2 to Hongik University, and go out of Exit 8. Turn right at Seven Springs corner and pass the intersection. At the 3-way intersection, turn left. Walk about 100 meters on the road above the playground and walk towards the road on the right side. Walk about 500 meters until you find the coffee shop on the right.

For more of my South Korea Posts visit the links below.