On from where I left off….

The Elephant Route is the most popular backpacking route in Southeast Asia. Traversing three countries Thailand, Cambodia, and Vietnam or the other way around. Traveling between Thailand and Cambodia, majority of people takes buses from Bangkok to Aranyaprathet cross the border to Poipet then continue all the way to Siem Reap.

But I wanted to make this trip different. I also wanted to see the sea before I go through ten more days of landlocked journey. Is that a phobia I just described? I don’t know I was just worried I wont be able to see the sea for a while. That scared me a bit. So I decided to make a stop in Pattaya.

Pattaya is an awesome exciting city right at the coast of southeastern Thailand. The city is popular for water sports and I don’t know why, Russians. There so many of them there. The challenge though with this idea is that there’s so little information about transiting from Pattaya to Aranyaprateth. But it wasn’t logical that there’d be no transportation between the two cities as there’s a huge stretch of highway connecting them. But I thought what the heck, the worst thing that could happen is that I would have to go back to Bangkok. So it was a plan.

Yesterday I realized that I totally forgot that I should have left for Pattaya that afternoon. But I was too tired and I thought that it was too late to travel. Now it’s my third day on this brand new foreign land for me and here I am, after willingly compromising my itinerary yesterday, I am up and about early in the morning. 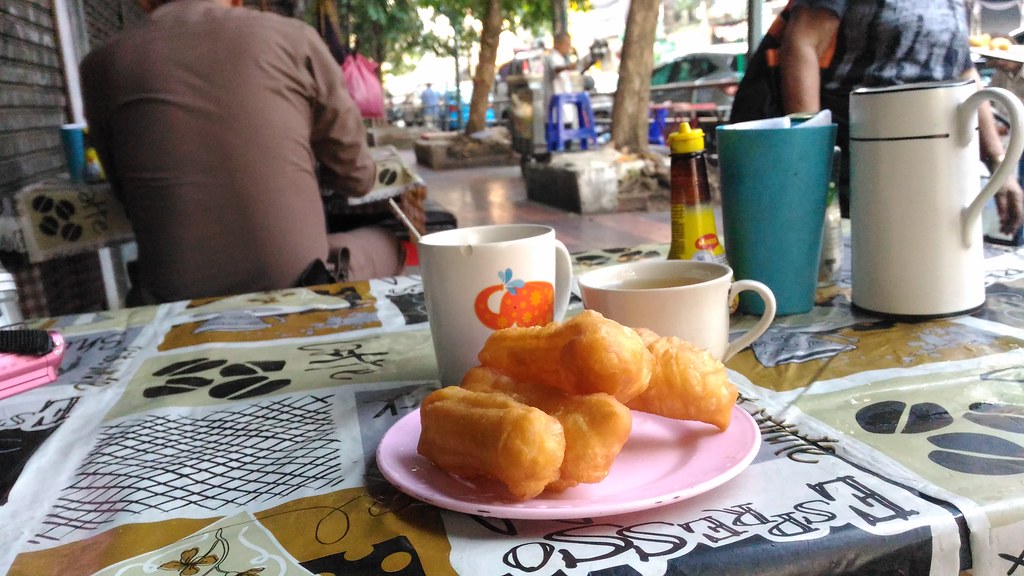 Marching to the sidewalk breakfast nook I discovered yesterday, I walked with some sense of intent and goal for the day. I sat down sharing a table with an elderly man trying to make the conversation he initiated work. It was all hand gestures and guessing the entire time.

It was perfect, that moment. For the first time in this trip, It felt like I knew what I was doing. Not just dodging bullets, shooting in the dark. The streets of Bangkok was still calm that time while the sun slowly shined on our seats and so I bid good bye to my local guy.

After breakfast I rode a bus and alighted at the Victory Momument area. I read somewhere off the internet that there are vans from there that goes directly to Pattaya, I even saw a video. After searching, I found that spot that looked so familiar. I realized that it was the terminal on the video that I saw where the vans were. I asked some people hanging out just nearby and learned that vans had ceased operations already and have transferred. 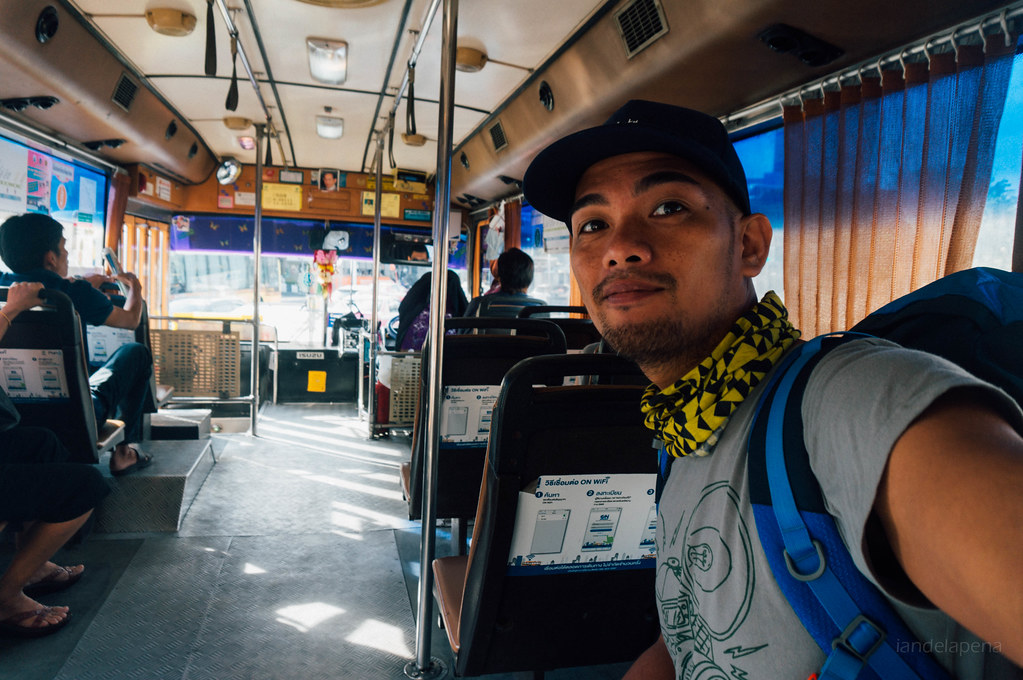 I had no choice. I decided quickly to just go to the Mochit Bus station. It was farther north of the city. I was intentionally trying to avoid taking the bus from there because it was far and hard to commute. I couldn’t find any transport easy and fast enough to get there. Buses would require me to walk and change buses and still walk to the station. At least that’s what I was seeing on the internet.

From the Victory Monument station, I took the BTS all the way to the northernmost station, Mochit. As soon as I got off to the streets my dilemma started. How the heck can I get to the bus station. Knowing that I will only be staying for a few days in Thailand, I didn’t really mind getting a sim card to get connected online. I was there, standing clueless on the road. Ugh, where is that wind I had while having breakfast? Why was it gone so soon?

I attempted to walk to the bus station. I checked on my offline map how far it was, I was like, 2 km my ass! 500 meters into my walk, I gave up. I had two bags on me, it was just too taxing. I still tried. I hailed a motorbike taxi for about 80 baht. I know that’s a lot for 2kms. But there wasn’t a lot of vehicles passing by that I could hail. I thought, that this should be it. 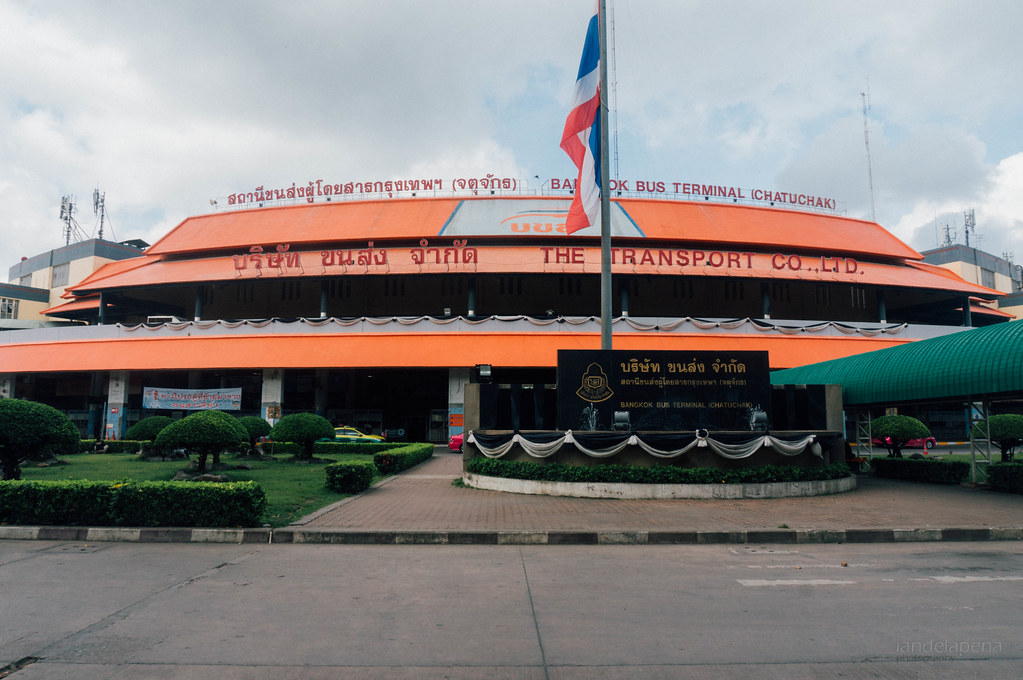 On my second day in Bangkok I realized that I totally forgot that I should have left for Pattaya that afternoon. But I was too tired and thought that it was too late to travel. The morning after I left early taking the bus then the metro to Mochit station. I wanted to walk from Mochit station to the bus terminal. I actually attempted to. I was like, 2 km my ass. 500 meters into my walk, I gave up. I had two bags on my it was just too taxing. I haggled with a motorbike taxi guy and got an 80 baht fare. My mind was protesting, I still think that was too much for a trip a little over than 2 kilometers. But I was just tired so I gave up and took the offer.

Arriving at the bus station, I find my way to one of the ticket booths for the buses bound to Pattaya. The fare was 117 Baht from the terminal all the way to the Pattaya Bus Terminal. After handing me my ticket, the ticketing officer prompted me to go to my platform immediately. She said that my bus is about to leave in a few minutes. I hurriedly searched for my platform. I kept on pacing back and forth trying to read and re-read the labels, but I seem not to find where my door was. Finally giving up on my own I asked a guard. To my surprise, I learned that I had to actually go out of the building and walk several meters away to an island where my bus’ platform was. Thank God it hasn’t left yet. Actually, it departed late. 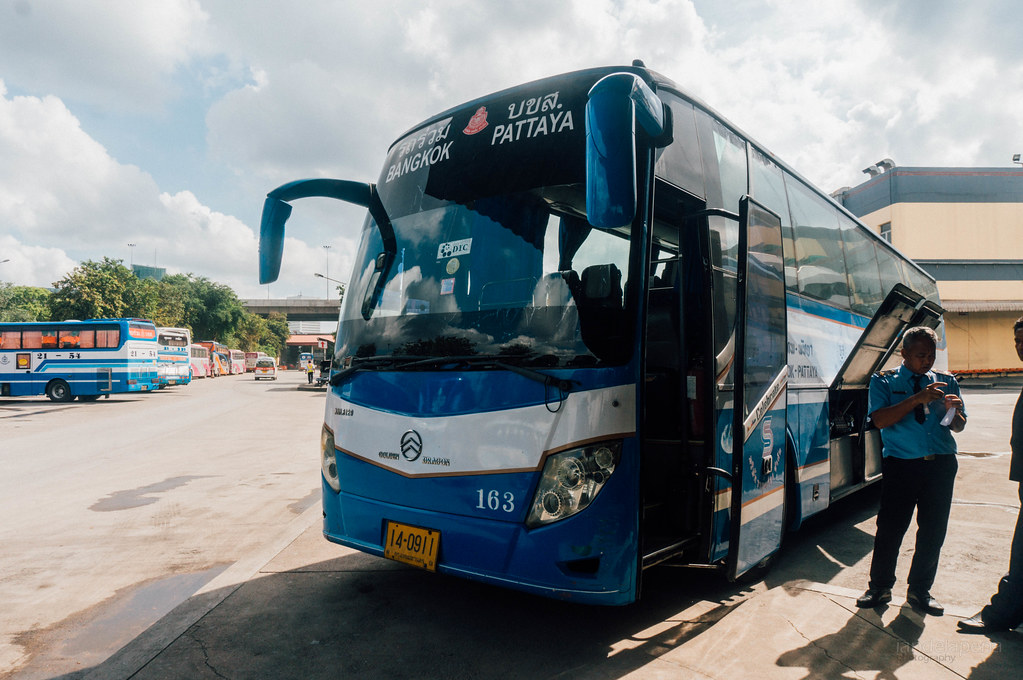 It was a blue bus that is government owned if I am not mistaken. The bus was comfortable enough like any decent bus. Airconditioning was enough to cool the interior but not blasting to freeze you to death. The journey from Bangkok to Pattaya took about 3 and a half hours with views of suburban Thailand along the way. I honestly thought and expected more of a countryside view but it seems like this part of Thailand is actually well developed already. I kept on looking for the ocean but I think the road was just too far off from the sea. 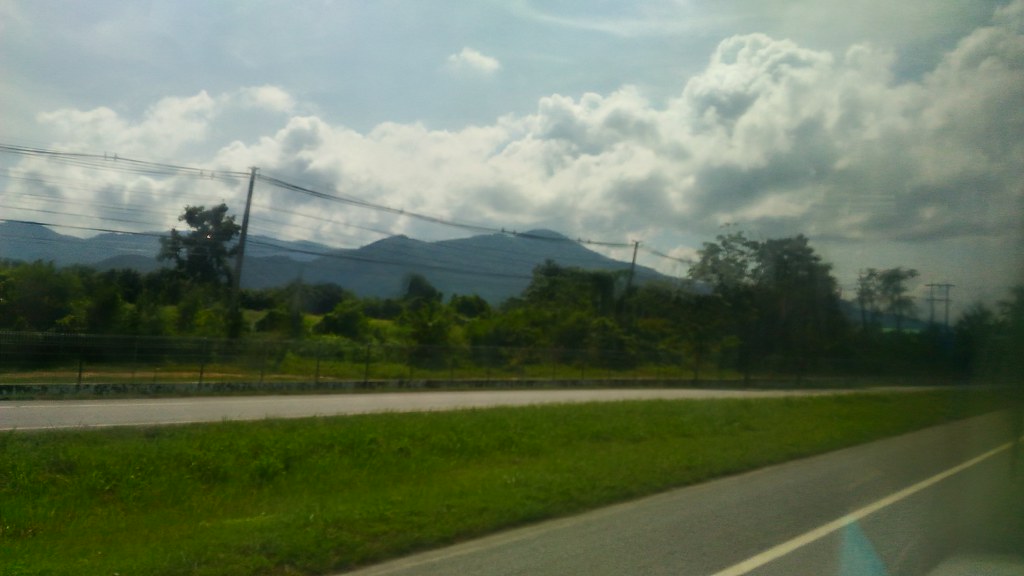 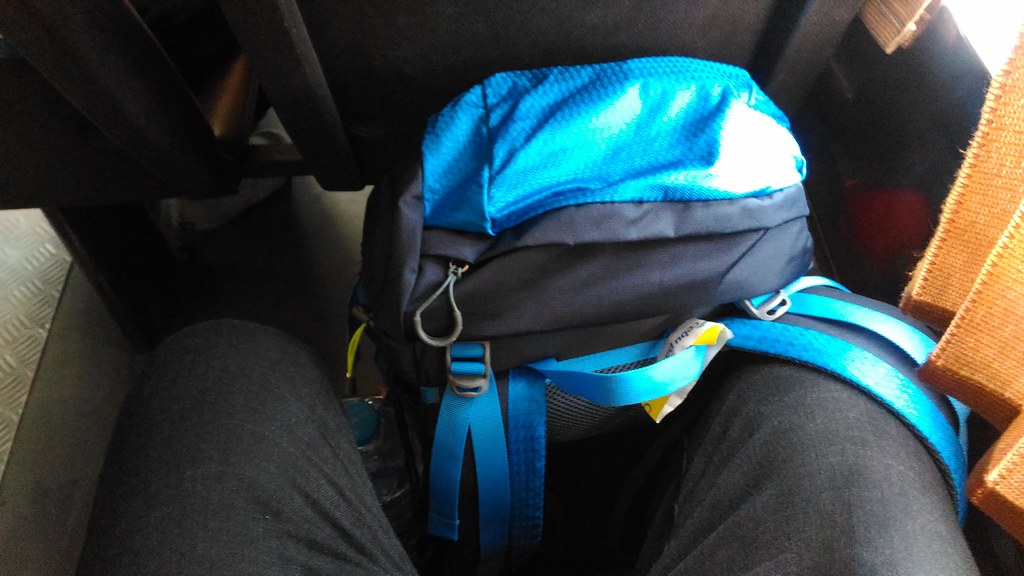 As soon as I got off the bus, I realize that I am clueless about how will I go around the city. I didn’t realize that Pattaya is huge. The immediate transportation available as soon as you light your bus are Taxis, Songthaews, and motorbikes. I was hesitant to take a taxi, I know that it is the most expensive. The other two I know that I can manage to haggle. Since I only had two backpacks, I decided to take the motorbike taxi. They initially quoted me about 120 baht but I managed to bargain down to 80 baht. Google Maps helped as it showed me how far the hostel is giving me a good idea of how much should it cost.

The motorbike ride took about 10-15 minutes because the driver, I think, couldn’t understand my instruction and wouldn’t follow the map. I mean there’s no need for him to play dumb and take me the long route since we already agreed on the price. 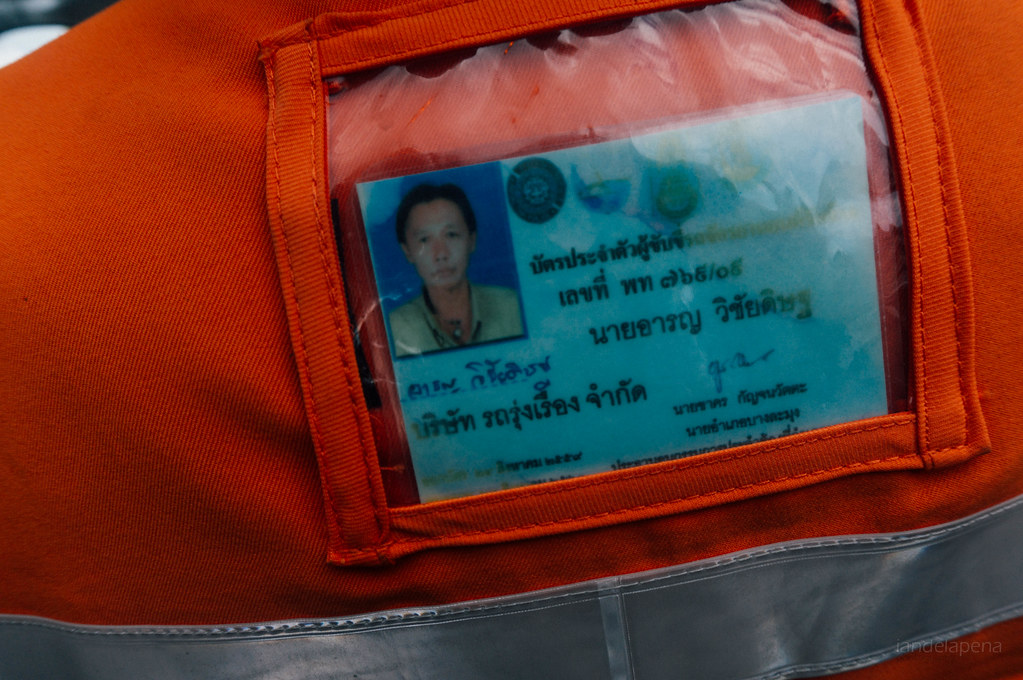 At last, we found my hostel. It was fairly new and everything looked clean and well maintained. I was impressed that within the small area it was occupying that they managed to fit in a pool table, a bar and some common area where people can meet and talk. Also, the thing that actually made this hostel the deal for me was their swimming pool. Also, they are the cheapest hostel that I can find nearest to the beach. 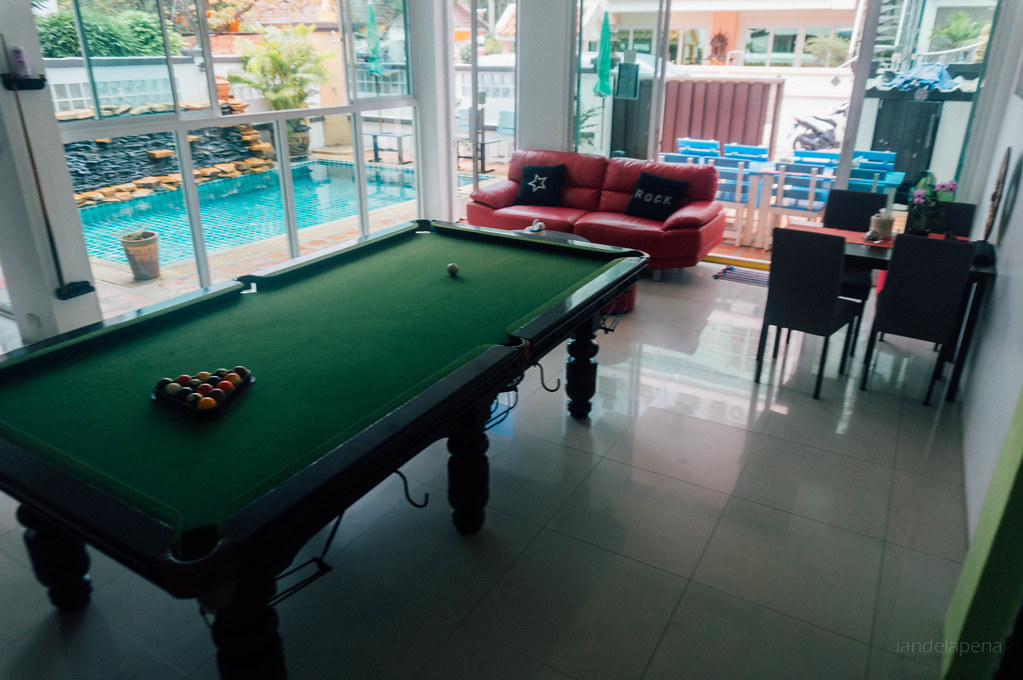 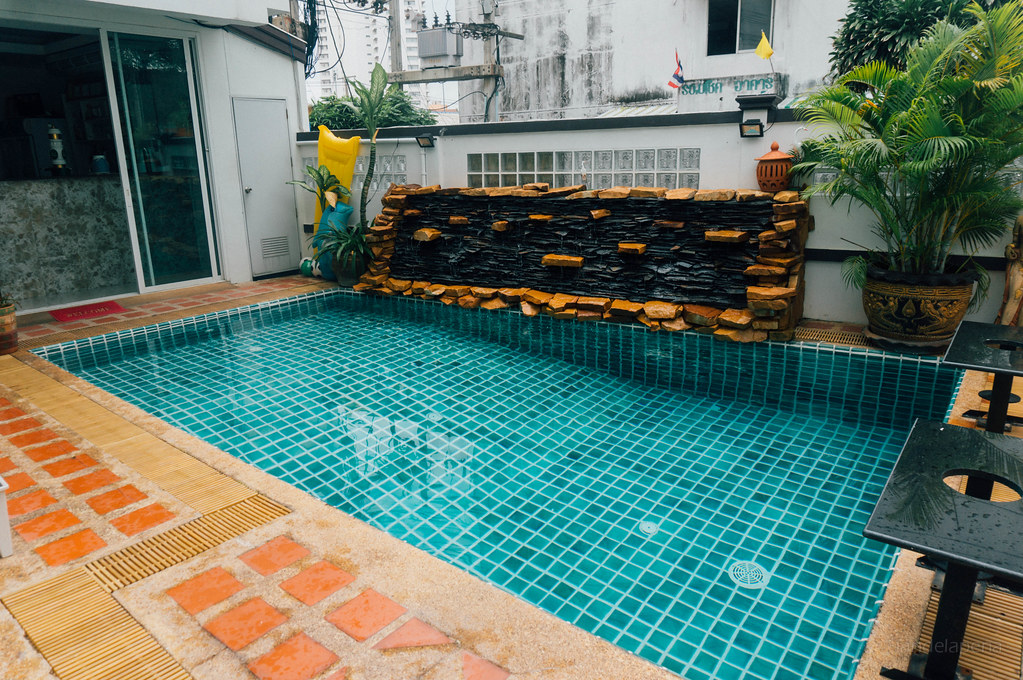 I was welcomed by the owner of the hostel himself. I was given a bed number and a locker number where I can store my things. The room was so spacious, unlike the usual hostel dorms that you’d find in Bangkok where it is so crowded. 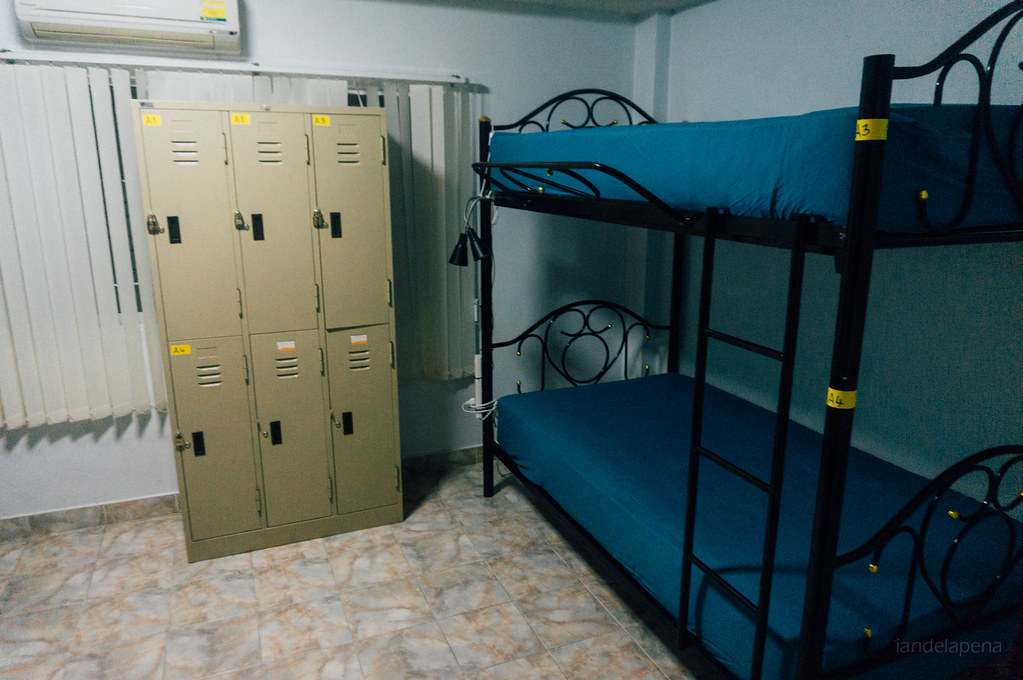 I tried to settle in and took a nap. After about an hour, I think, two fellas checked in as I go out to see the beach. The seashore is just about 250 meters away from the hostel. One thing that I noticed while walking to the beach is that a huge number of tourists are noticeably Russians (by the way they sound) and evidently, many if not most of the restaurants are in Russian.

The wind was a bit cold that day and it was late in the afternoon already, Jomitiem Beach was empty. I thought that it wouldn’t be nice to dip and just get cold at that time. Satisfied with a glimpse of the beach I headed back to the hostel. It was almost dark already and the two guys who just checked in are hanging out at the common area.

Trying to be more outgoing, I went out with them for some good dinner and beer. It was a good night talking about travels with some new friends. Back at the hotel we caught just in time to hang out with the hostel owners. They invited us drinking and got shots from them. My plan that night was to go to the walking street, but we were having so much fun that night I decided to ditch my plan. I thought that hanging out with my new bros, at least for that moment, was far more awesome than seeing the street.

We called it a night and turned in. It was a good night and a big day is waiting for me tomorrow.