I’ve already given up searching for a cheap way to travel from Pattaya the night before. I asked for help from the hostel owner, but even he would only reference google for options available. I’ve already packed my things and was about to check out. Thank God that it was May who was at the reception counter. She looked puzzled why am I checking out so early, yeah that was like 7 AM. She looked at me as if I was about to waste a perfect day and a lot of time as I told her that I was to travel back to Bangkok and get on a bus to Aranyaprathet as it was cheaper rather than taking a commercial bus from Pattaya.

As soon as I finished trying to justify my plan, May with a relieved face told me “I cannot tell you anything yesterday, the owner was here” she then gave me information that would save me so much time traveling to Bangkok and on to Aranyaprathet. 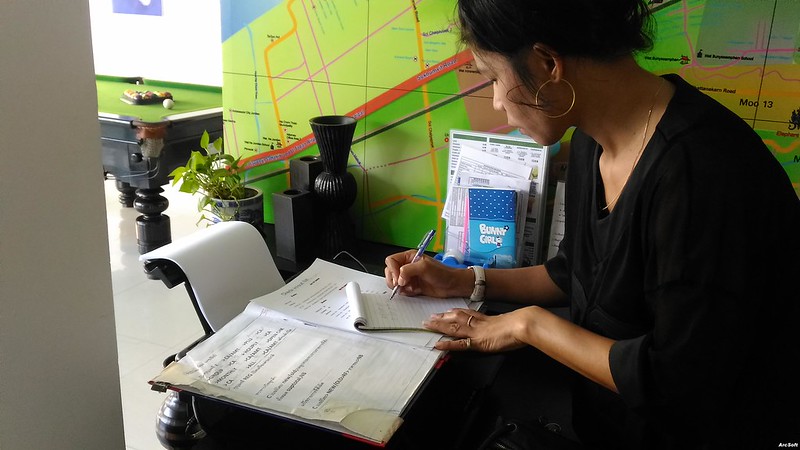 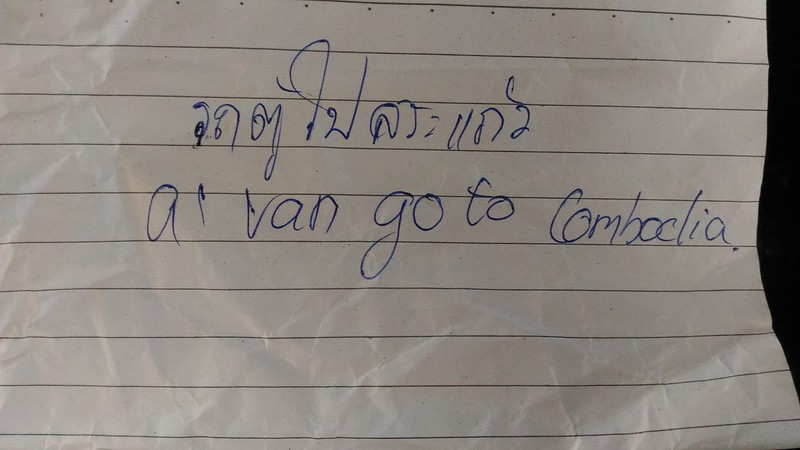 She wrote down on a piece of paper, in Thai and English instructions that I can show to a motorbike taxi driver that will tell them to take me to a van terminal. It was such a relief that I don’t have to back to the city anymore. I am so lucky to have met May.

With half of my day all cleared up, I headed to the beach once more. This time I made sure to take a dip in the water. Honestly, I am not impressed with the water and beach itself. But who said this is Thailand’s best beach anyway. The water felt warm as I slowly put my feet into it. It was a good feeling having some warmth while a cool breeze blows. 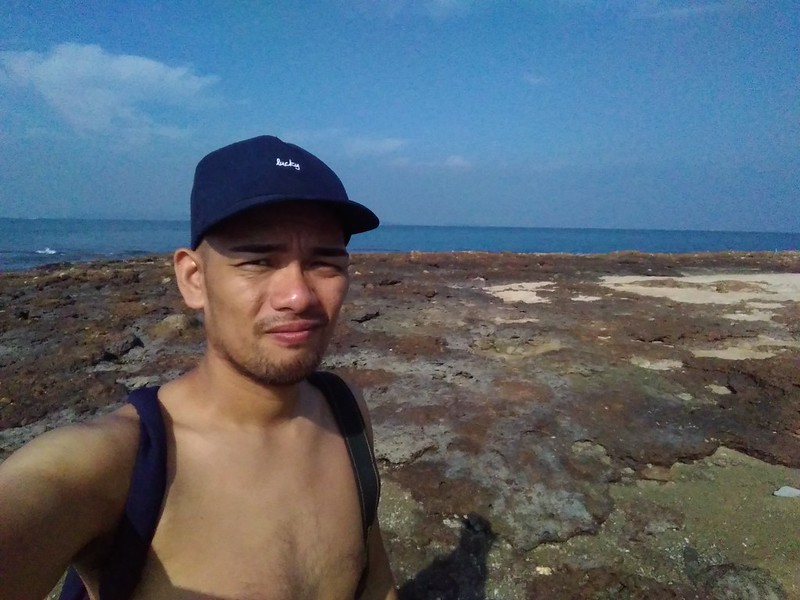 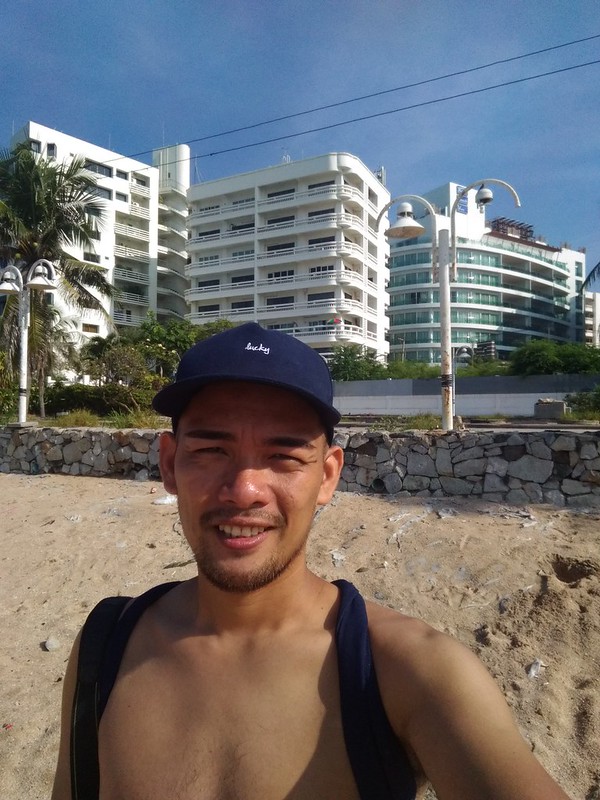 I tried to enjoy the beach as much as I can knowing that this is the only time that I can see the ocean for the next 14 days. Mid-day was coming too close already, so I went out of the water and had lunch at one of the eateries along the road. I had a good rice meal and bubbly soda water. Yes, up to this day I do not understand the need for carbonated water. Hahahaha! 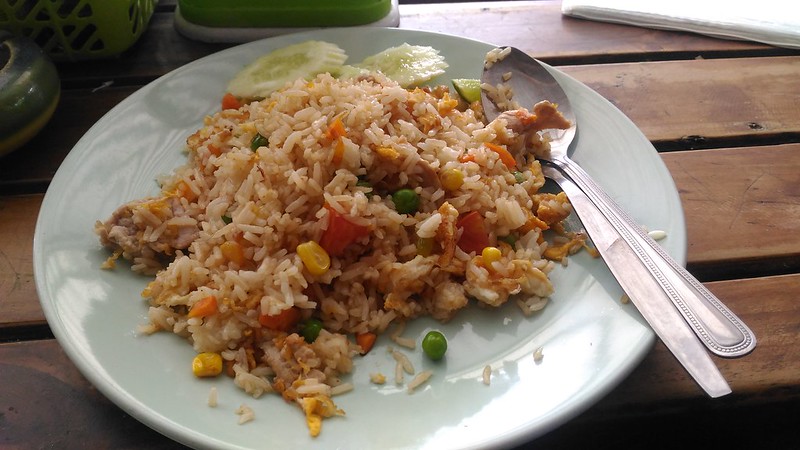 After taking a good shower, I finally checked out for real and said goodbye to my newfound friends Alex and Neil. Of course my deepest gratitude to May of whom I would have not had the time to enjoy the beach that morning.

Hailing a motorbike taxi in front of the hostel, May graciously talked to the driver to explain personally where the terminal is. I bid her goodbye and in a few minutes, I lost sight of the hostel. The Sun was unforgiving, but the rush of wind made it bearable as we rush through the roads of Pattaya. 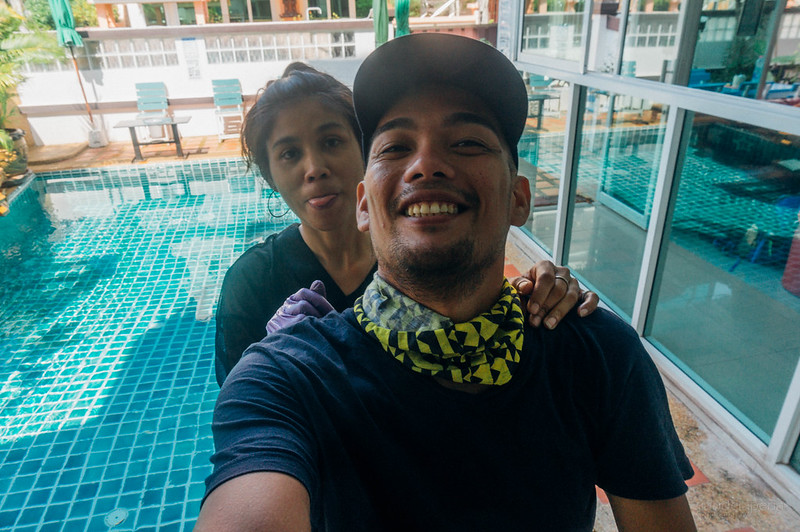 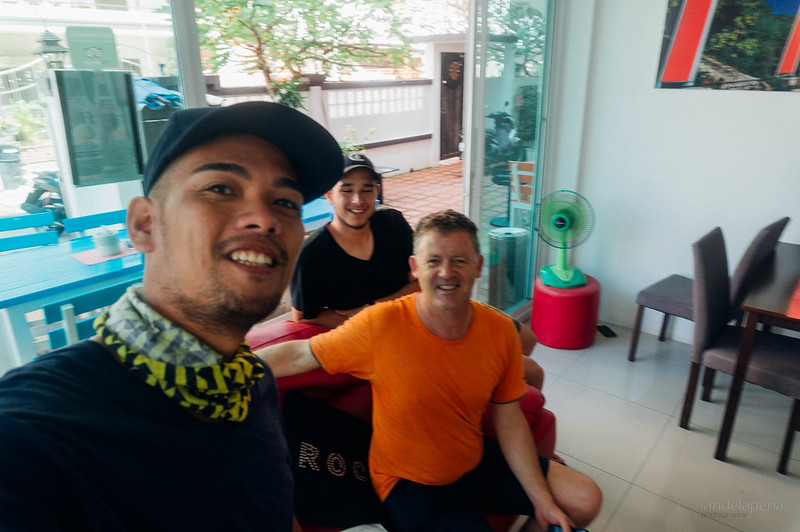 It seemed that we were some sort of lost, but I trusted my driver and soon enough he dropped me off the terminal. I didn’t see any schedule posted anywhere so I just assume they just dispatch anytime that the vans are full.

I walked into the “office” and was told to take off my sandals. As an Asian guy, that’s pretty normal for me. The thing was it was just an open office, like a store, so there were no visual queues that I should take off my footwear. Anyways, I stepped in and was asked to sit in one of the plastic chairs. I paid the 108 Baht for the fare for the van that will take me from Pattaya all the way to Aranyaprateth. 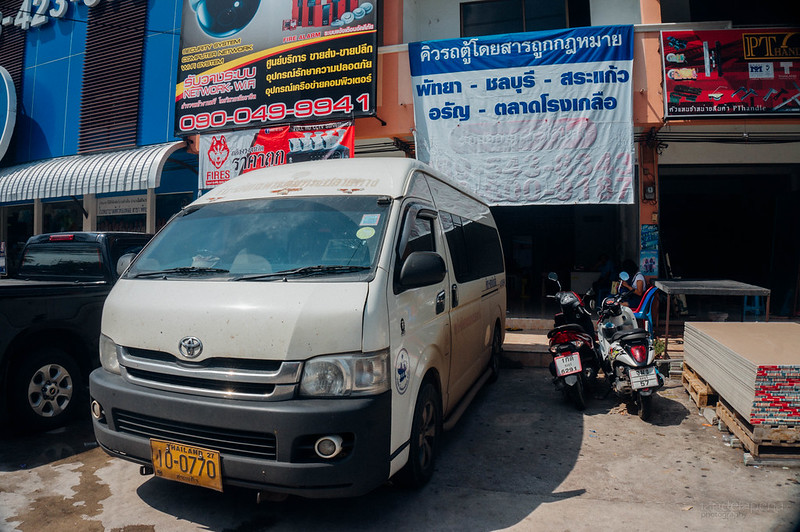 The van was spacious, and it took about an hour maybe to fill it with enough people for it to push through. There were no schedules followed here, just intuitions. I was just so happy that they didn’t fill the van packed with people. I thought that Thailanders are quite comfort-conscious, unlike us Filipinos who would put people in vehicles, cramped like sardines. 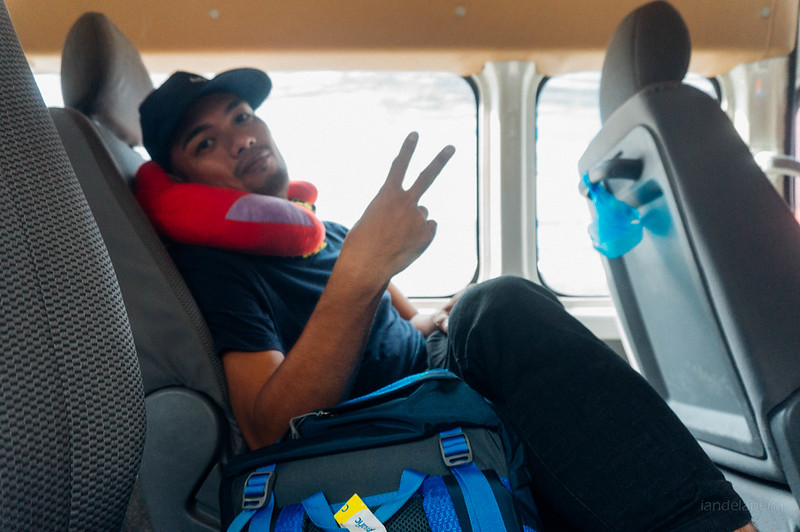 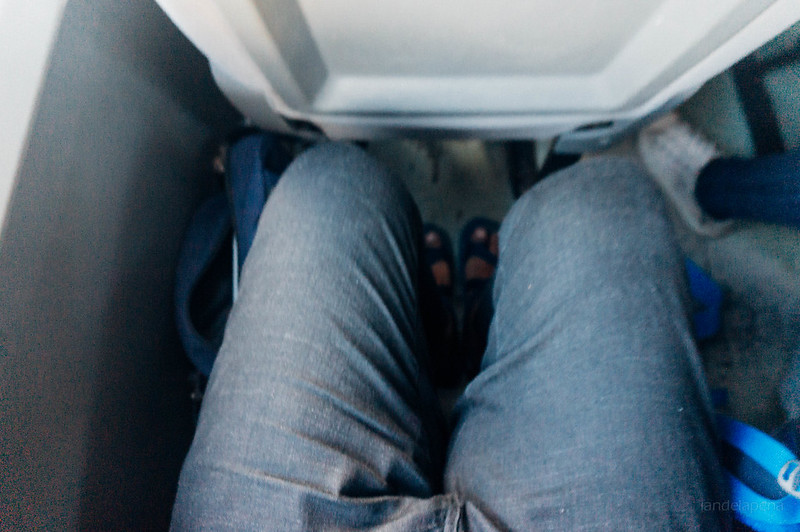 The van stopped a lot along the way. Soon I realize that it was not a shuttle van but, a commuter van rather. After a few too many stops, I realized that Thais are pretty much the same as Pinoys. Why? Well, the van was just packed knee-to-knee much like how you commute from Ortigas to Makati.

The whole thing took me about 4-5 hours. Though going back to Bangkok and taking the bus could have been more comfortable the travel time from Mochit to the border town of Aranya, as locals call it for short, will have taken the same time. Of course, you will have to count the time you have to spend going back to Bangkok as well. Thinking about it now, I still think it was worth it. To see the countryside of Thailand was an awesome experience not to mention exploring a different way of traveling from Pattaya to Aranya. It was some kind of off-the-beaten-path exploration to get to my next destination.

Most of the passengers alighted at the town market. I was nervous that the driver will just drop me there as well, then I would have to take a tuk-tuk to get to the border itself. I asked the driver and was told to hold on and he will drop me at the terminal by the mall. A few hundred meters later I was dropped off.

The atmosphere at the Thai side of the border was somewhat festive. A lot of people selling some goods and food, it was much like a marketplace which is very common for border towns. I ate some snack food for my lunch for I can’t find a proper affordable restaurant. The street food though was more than enough for me.

I was quite satisfied with the sausages and fishballs. I even brought some to go for the road. 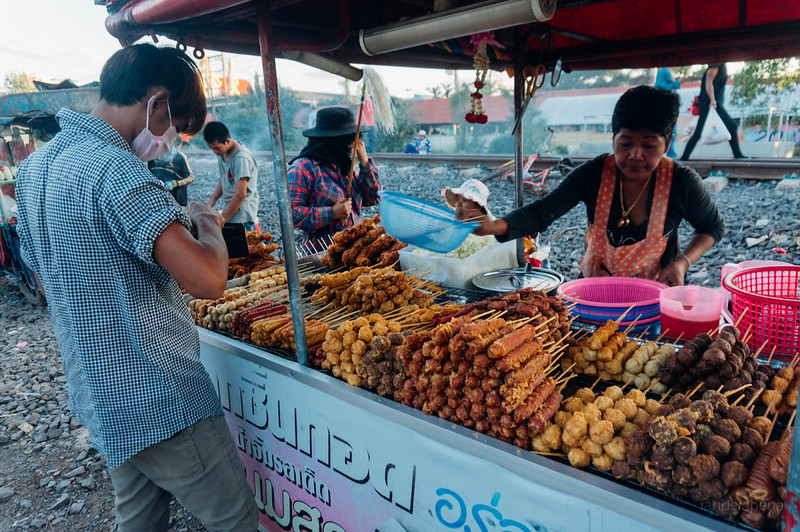 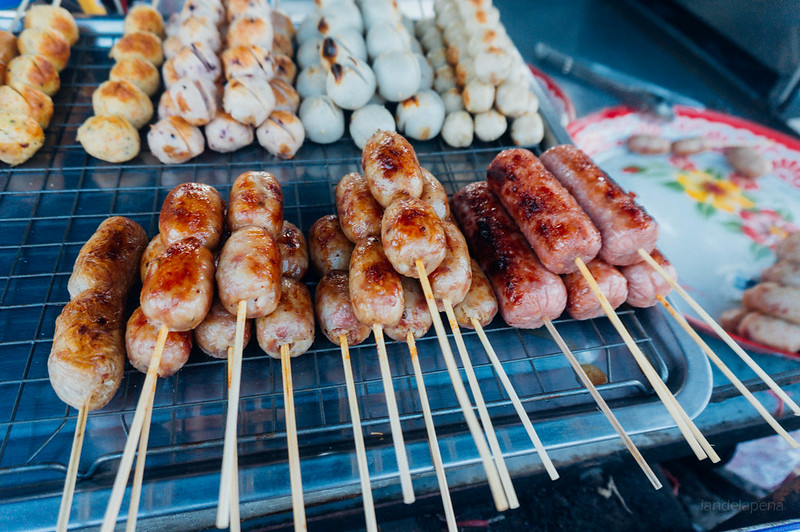 Hunger satisfied, I looked for the Thai immigration office to process my exit stamp. It was pretty easy to find the office, provided that you find the signage. Processing the exit stamp was a breeze. The line moved really quickly, next thing I knew I was out of the office and into no man’s land, between the Thai and Cambodian borders. 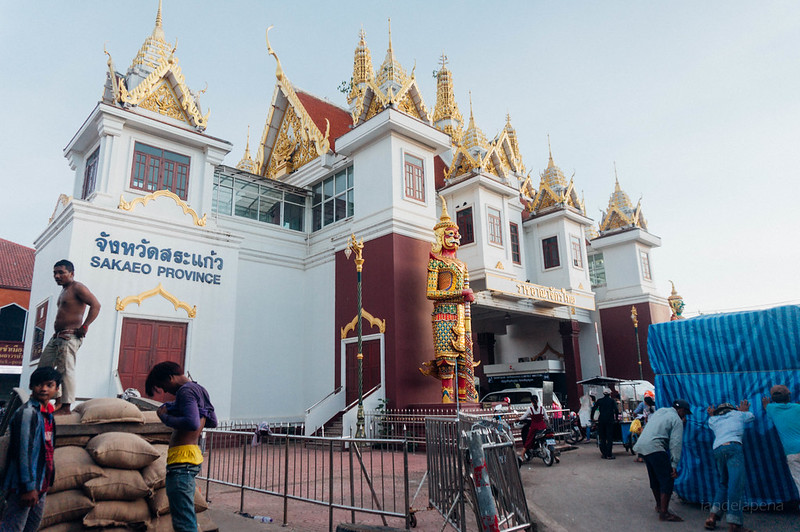 The Cambodian side of the border was different. It was chaotic. The immigration office was weirdly poor compared to Thailand’s. It looked like a shed more than an office. The processing was quick, though I was quite nervous because of the corruption stories that I read online. Fortunately, I didn’t get to experience being asked for an “Entry fee” when I entered the country. 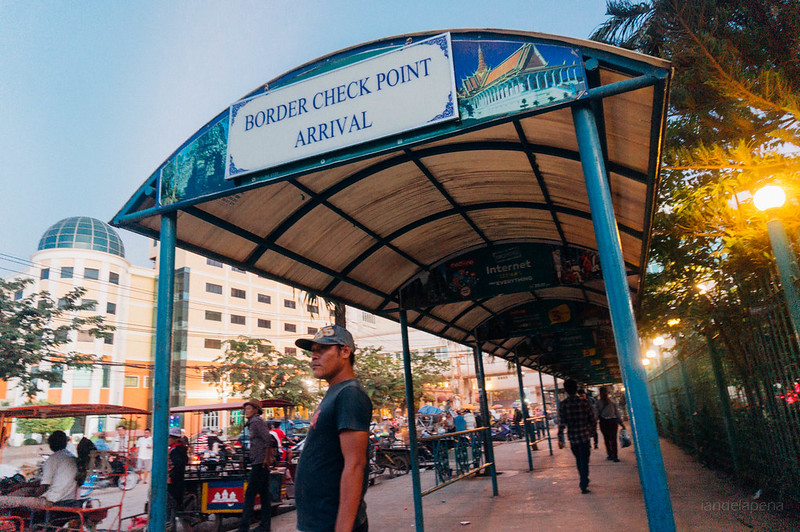 I kept on telling him that I don’t need any help. I continued on walking away without acknowledging him but he insisted on talking to me. I was really getting annoyed but scared at the same time, knowing that I am a tourist in their country plus more people started following me. I don’t know what they were talking about in Khmer, so I was cautious about my actions. This kept on going for a few minutes until I had it. I yelled at him to stay away from me. It was weird that he looked aggravated. I am not sure of what really happened there but I didn’t feel safe that time. When your turn comes, just do not talk to anyone at the border. 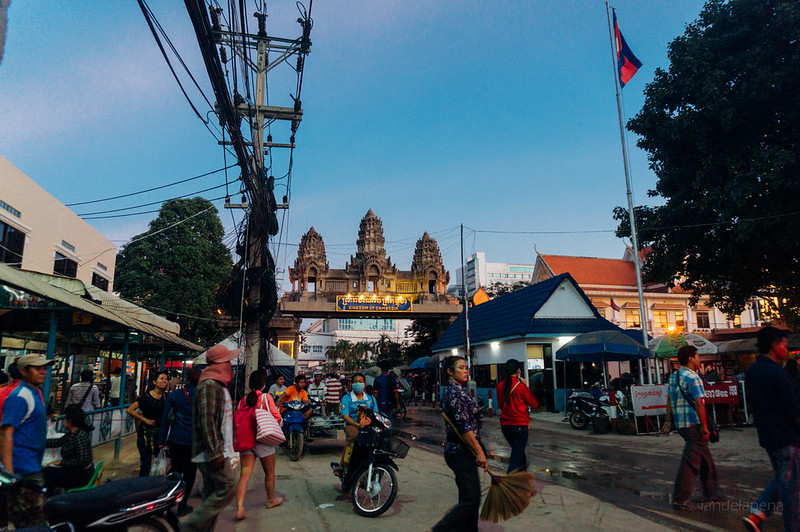 Moving on, I tried to search for the free shuttle bus to the international bus terminal where the buses to Siem Reap are. I am not quite sure if the bus that I did see was the right one. It was closed and unattended. I can say that it was going nowhere for a while.

I decided to walk around and to find a taxi or another mode of transport to get to the bus terminal. I also checked out some stores to see if they have sim cards but they didn’t have one. I was on the verge of deciding to walk all the way to the terminal but when I checked my offline map, it was gonna be a 10-kilometer walk. Thank God, as I try to search for a sim card I also found a ticketing booth. It was probably a third-party agent but I thought it should work. 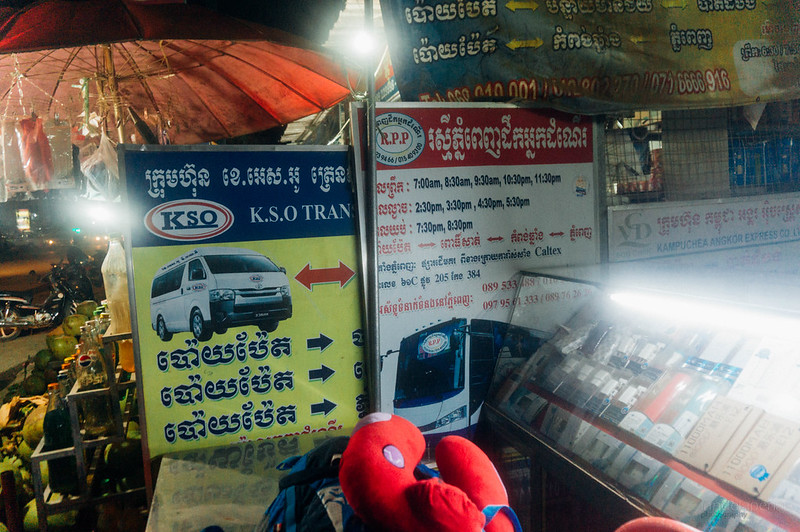 The staff told me the bus gonna come later and was going to stop at their storefront. Well, at least that’s what I understood. After a few minutes, and a little of bugging him where the bus is, the guy went to get his motorbike and actually took me to the bus terminal. 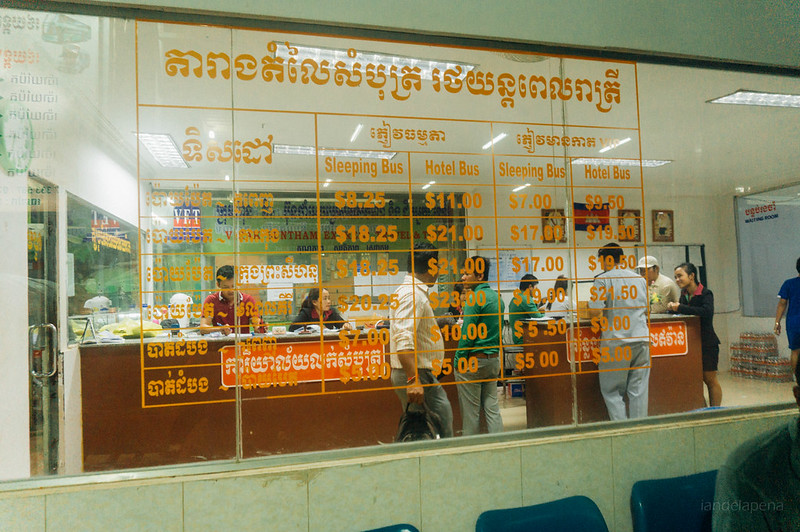 It seemed like the guy endorsed me to one of the bus company’s staff. I was asked to sit down at the lounge. But the thing is no one told me that someone will inform me if and when my bus arrives or departs. Fortunately, I am a nervous cat. I constantly stand up, check and ask whenever a bus arrives. It was a good thing because the last bus that came was my bus and no one really told me or called me to board. If I didn’t ask, I could have been left behind. 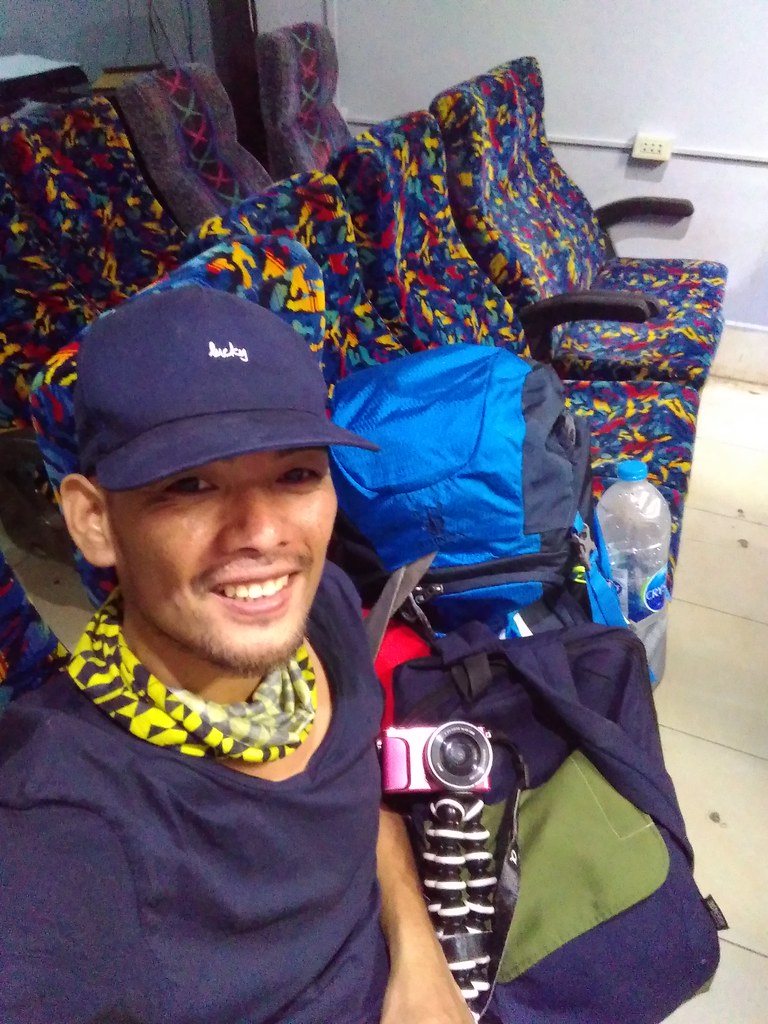 Boarding the bus, I learned that it was something they called a Hotel Bus. Why? Well, there were no seats but beds! It was cool that you can actually lie down and sleep to your destination. HOWEVER! If you are traveling alone, you will have to share a bed with a stranger. It’s a big deal actually. See when I reached my third country on this trip, I met people who had bus tickets already but opted to take the plane because of the horror stories about sleeper buses. Stories differ from being robbed and the worst raped. Though I did not actually read anything online, I trust that those were not just made-up stories especially those are serious allegations. 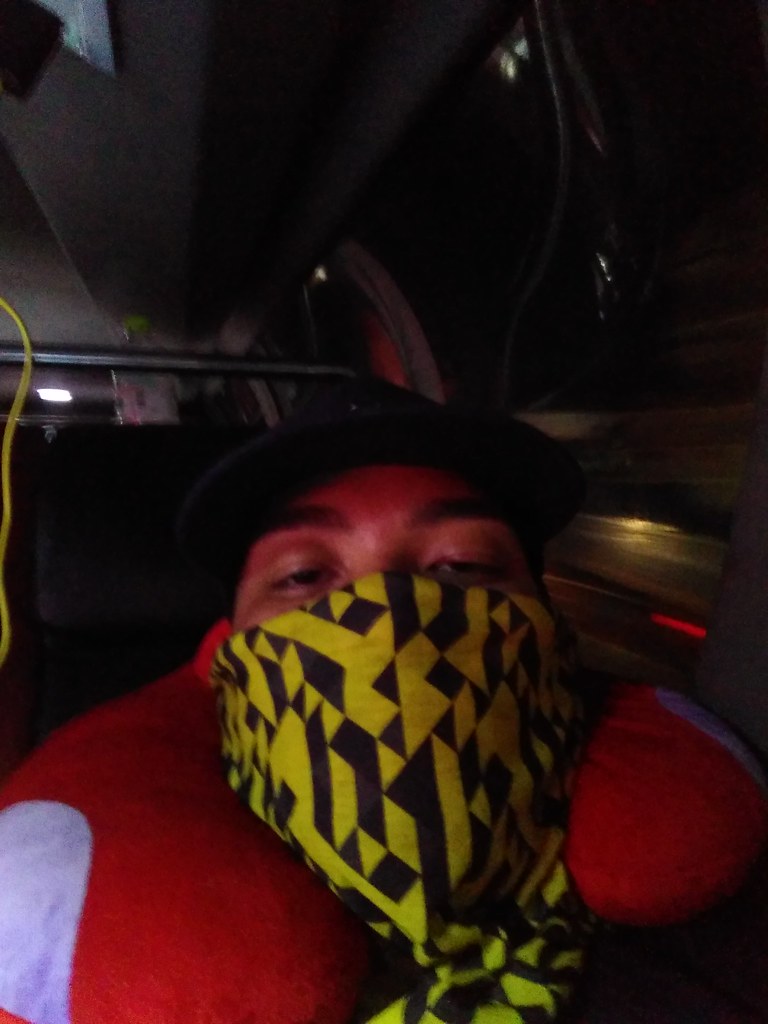 The bus departed about thirty minutes later. I kept on trying to sleep but, I don’t know, it was just like a marketplace where everyone kept on shouting. Everyone settle later and I finally had a chance to nap.