Today typhoon Ruby is passing through central Philippines and the weather has dropped on the 20’s reminding me of my Ivatan winter. I woke up on my early on my second day, just right before sunrise and the weather was just freezing. I need to catch the jeep that takes passengers to Ivana port, the gateway to Sabtang Island. 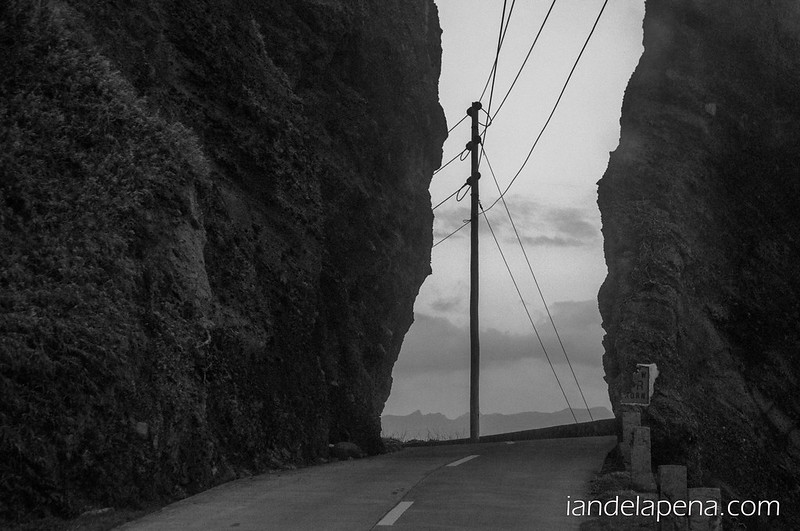 After a few minutes more I saw the jeep. I took the front seat so I can get a good view of the route. Travel time is just about 30 – 45 minutes fare is about 50 – 75 pesos (can’t remember the exact amount). To get to Ivana Port, you’ll be passing through the route to Mahatao and go further a few kilometers north more.

The router is scenic, as expected. Expect nothing less from Batanes.

Before we reached the port, the driver handed out a manifesto. It turned out that the driver also acts as an agent for the Falowa that would take us to Sabtang. It is actually great because it would make it impossble for his passenger to miss the trip to the island! hahaha. 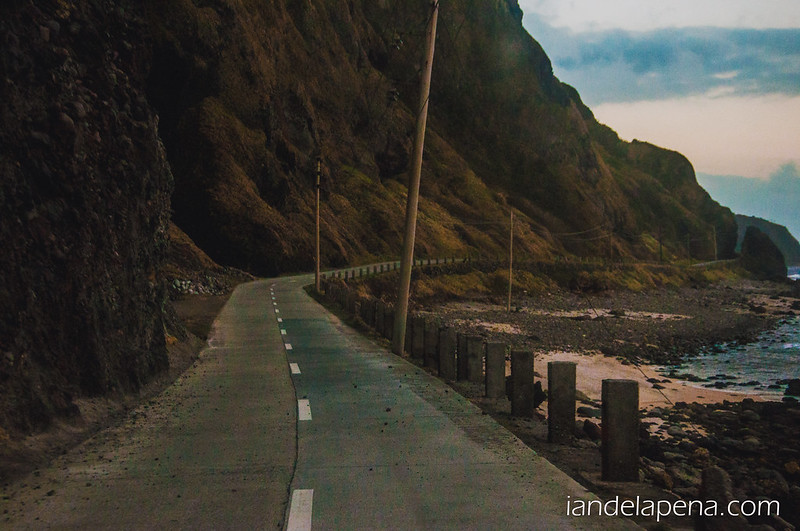 I was early to arrive at the port and the Falowa was not yet there. But there were things to do just near the port. Across the port the San Jose de Ivana Church stands. The front doors were open, so I stepped in and explored the church. Inside was dark, but the light from the doors illuminate the interiors just enough for your eyes to adjust to and let you see.

Most if not all of the churches in Batanes dates back from the spanish era, I may be wrong but I didn’t see any new churches while I was there. Anyway, after checking out the church I crossed back to the port side of the street and got some snacks from the famous honesty store just right beside the port. 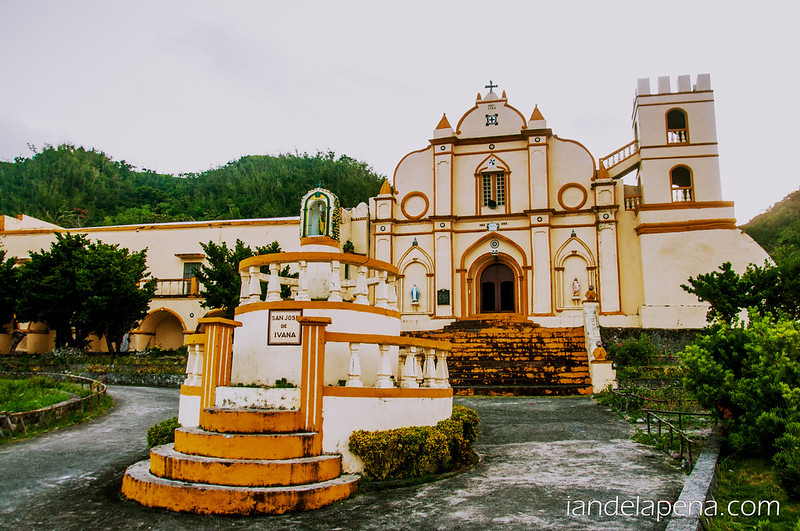 The famous honesty store is a small shack off the road that you can just walk in to take some stuff and leave your money in a jar. If you are honest it feels just okay nothing biggie, but if you are like me -a city guy that trusts almost no one from the urban jungle- it’s actually amazing to a certain point that some would be baffled why would someone leave their store like that! Well, it’a an honesty store something that is not special for Ivatans because it is the way they live but it is something that makes them special. 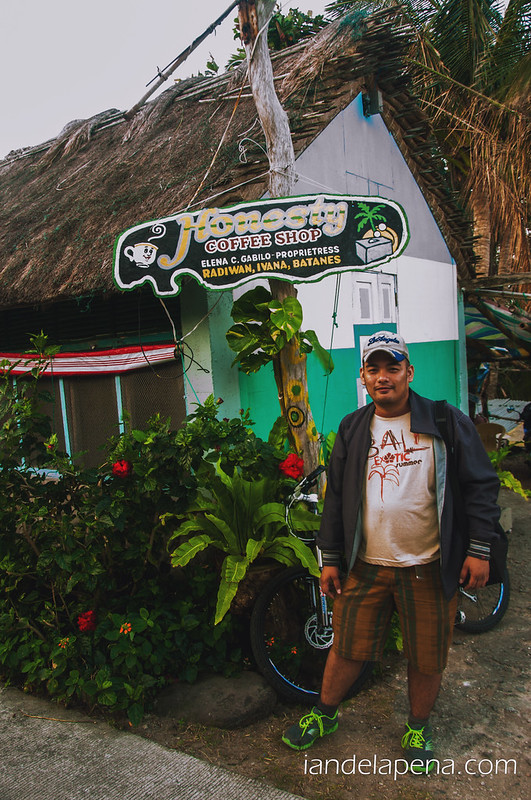 My falowa arrived and everybody started boarding. Unlike in other parts of the Philippines people here follow laws. Despite the excellent track record of the falowa of having zero casualty, the boat crew and the coast guard still makes sure that everyone is accounted for in the manifesto and are wearing life jackets. 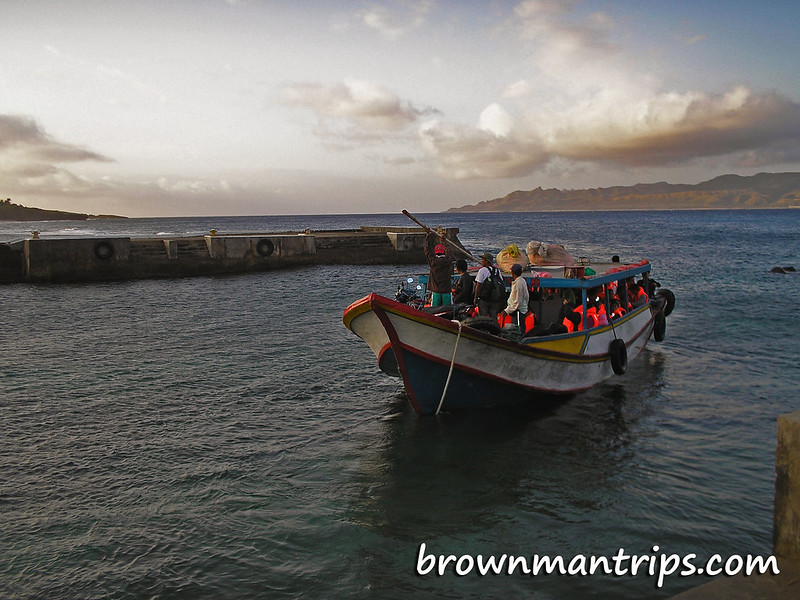 The falowa docked on the port and I was on my own again. I walked around the area to check out what are there to see, it was the island’s center. You can stay for the night in this area by sleeping at the dorm type accommodation at the tourism office. I stepped inside and asked for directions going to the “Barrio” where some of my friends are staying.

They asked me to pay for Php 200 for the tourism fee which I don’t which or what the tourism fee materializes into but just thought of it that I gave it out of goodwill, I mean it is a sleepy town not much economy goes around the island (and for me it is it’s charm, its provincial atmosphere) so I guess it’s fine for me to pay the cost.

They offered me a ride for 300 pesos from the port to the barrio, which is popularly known as the Chavayan Village, it is where the movie Batanes is said to be shot. I didn’t think twice cause it felt that it was reasonable. The road to chavayan is rough along the way you’ll be passing by spots where you can stop and enjoy for your self. That is what I  like about not being in group tours, if I go around on my own I can stop where I want to and leave when I want to, it is a bit more expensive but I say it is worth it. The driver of the habal-habal told me that the 300 pesos that I paid for is good for a return trip to the center but I asked him to leave as I was joining my friends who were staying in the barrio. After the trip going to the barrio, considering the road condition and the length of the road, I’d say 300 pesos is a bargain. 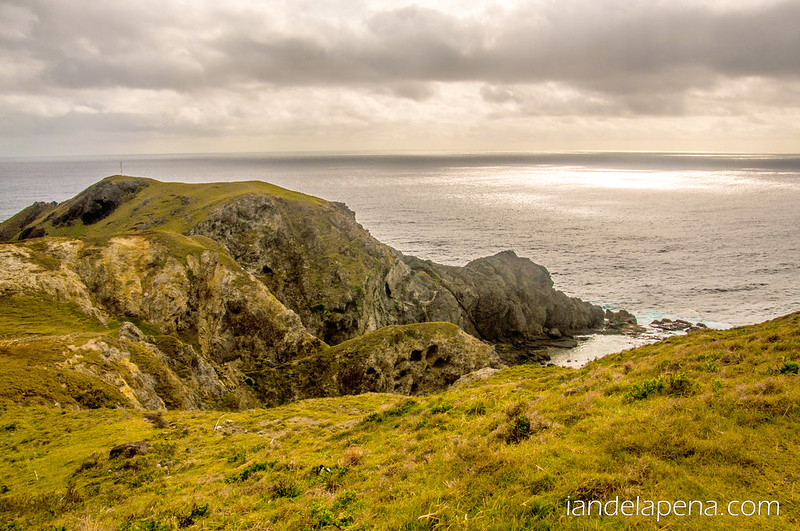 I spent most of the afternoon roaming around the barrio. Chavayan I must say is a must visit, there are other old barrios along the way going to Chavayan but it is not as nostalgic and amazing as this barrio by the sea. It is something like out of a storybook that you’d never thought could ever exist, a place for hopeless romantics. 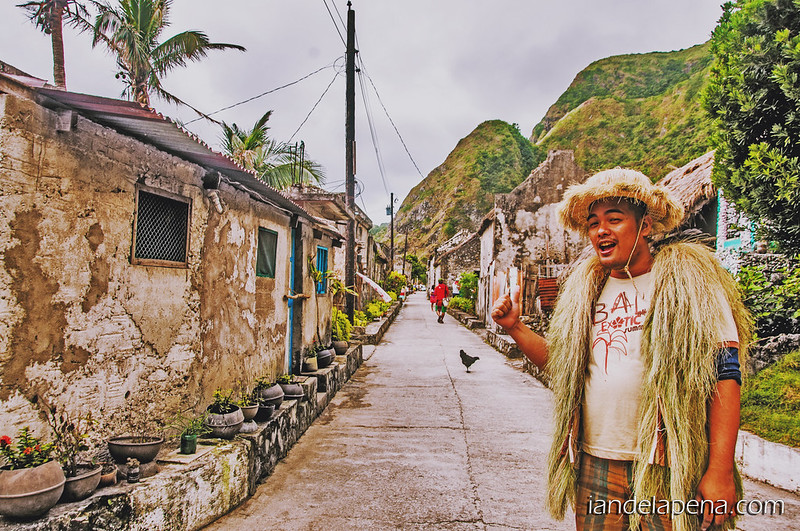 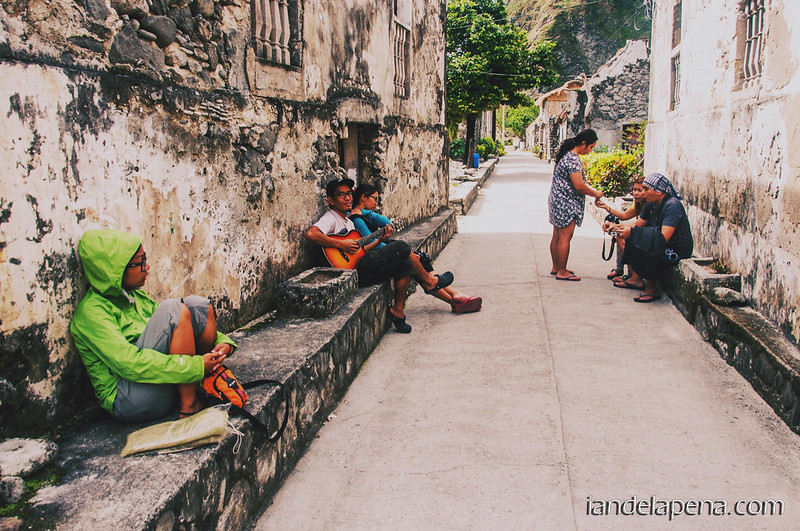 Hanging out with my travel blogging idols and the Mango Bandits hahaha
(left to right Kaiz of  missbackpacker.info Owen and Nikka of Two2Travel.com, My mentor Doi of  TheTravellingFeet.com and dynamic mango bandits duo.. hahaha)

It’s a small village, people know each other -literally. I walked through the main street till I reached end where the village meets the shore.

I savored every moment that I had at the village, the simple life that they live, the fresh air and that feeling you actually feel alive. It was priceless.

It was time to go back to the Poblacion (the town center)so I rode with my friends going back on a tricycle Ivatan style. halfway of the trip, I noticed that my tripod was missing! The driver immediately stopped and went back the path we went through. We hopped off the tricycle as he goes back so that he can drive faster. 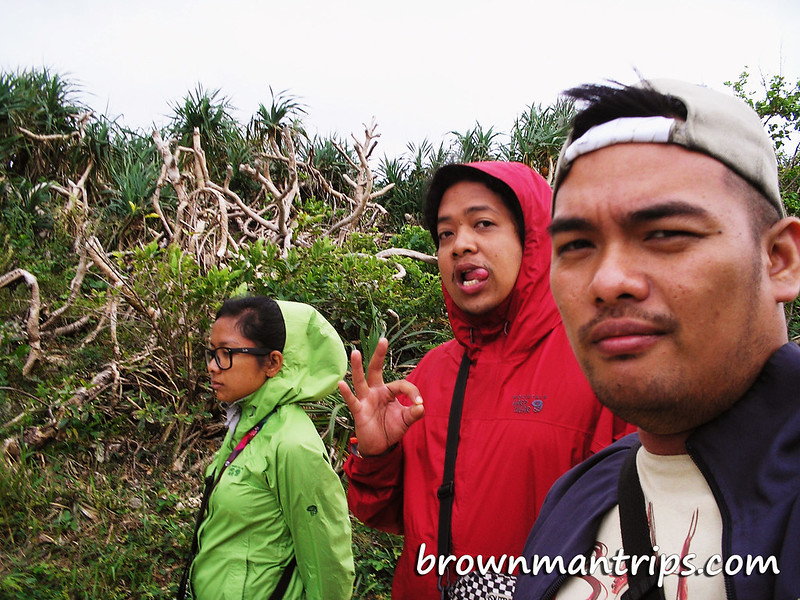 We walked along the deserted road to keep our selves warm, the wind was blowing and it doesn’t help that it was winter that time. It was like Taiwan all over again. Untouched beaches planks the road on its side, I kept on thinking if I only had enough time to stay in the island I would soak my self under the sun, errrrr maybe not it was terribly cold! hahahaha! But why not during the summer ey? 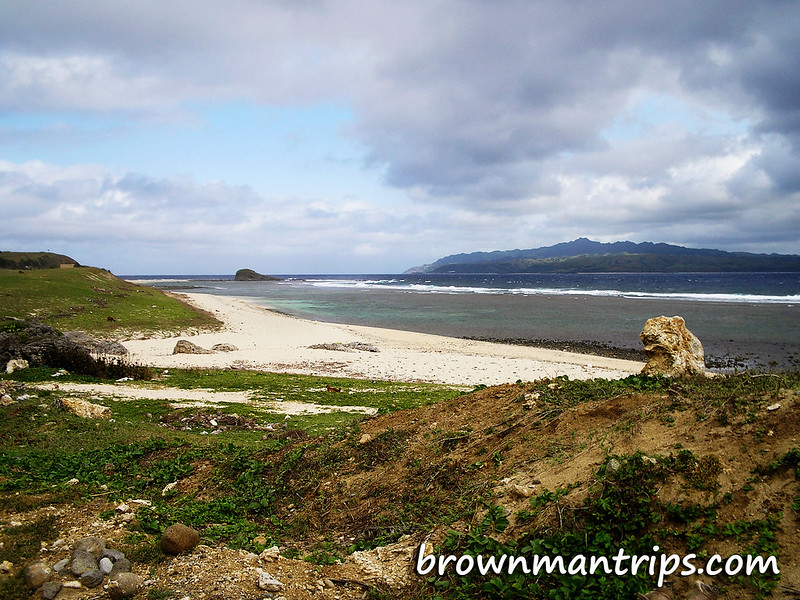 The driver got back and found my tripod, thank God! I mean that is a good tripod that I use.

We reached the port and there were no falowas just yet to transport us back to Batan. I decided to go up north of the Island and check out two spots real quick, I took a tricycle rushed all the way to Morong beach, a secluded paradise where most of the organized tours take their lunch. After exploring the beach, we quickly went to the light house that I saw as we approach the port when we were arriving to the island. 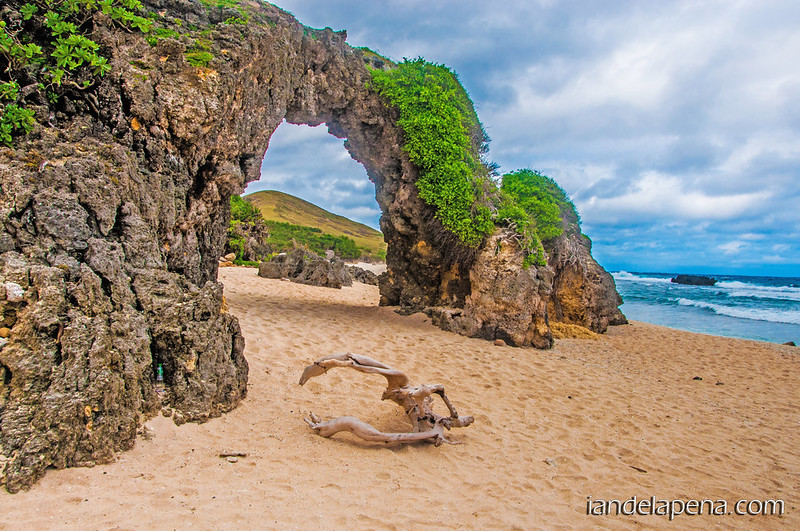 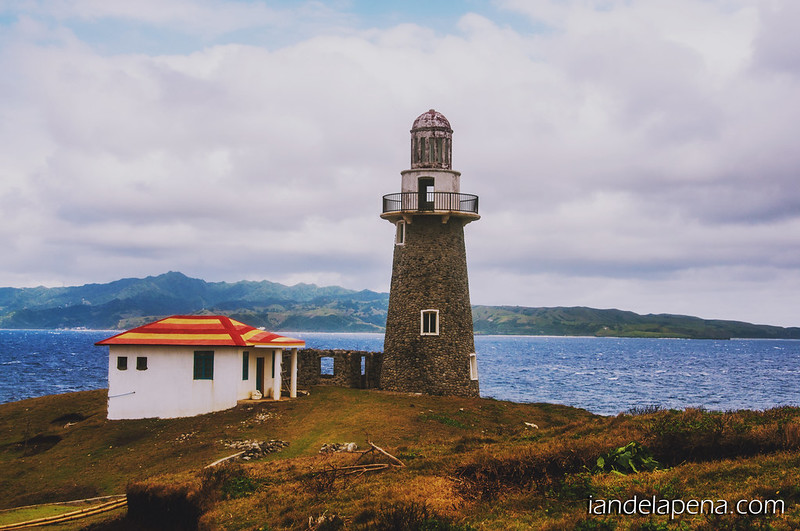 I didn’t want to miss my ride back home so I rushed back to the port.

On the Falowa it is advisable to take the back seat as it feels a lot less shaky than the middle or front part and you get to stay drier! Unfortunately I was seated on the middle part of the Falowa, I got splashed on and got dizzy half way of the trip at the middle of the open ocean. But I survived, nope didn’t puke, but some of my friends did and you’d never blame or make fun of them if they do because of how big the waves are!

My feet are back on dry land, I feel stable 🙂

Going back to Basco posed to be a challenge. There were few to no public transport, good thing I was with vet travel bloggers and cowboy! hahaha! They practically stopped the falowa’s owner’s crew’s shuttle truck and asked if we can hitch a ride back to Basco! The guy was awesome he let us ride and didn’t ask even just for gas money! ahhhh how great the Ivatans are! there you I just raped this sentence with exclamation points hahahaha! 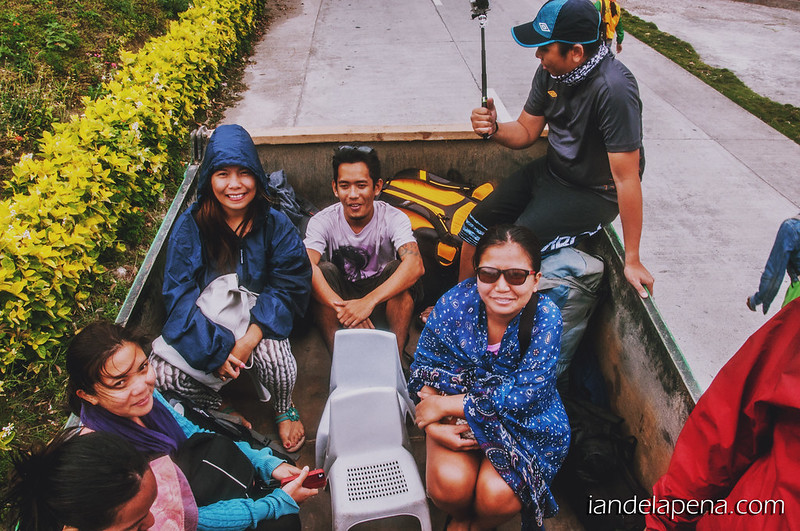 It was a tiring day I walked back to my hotel to rest for a couple of hours.

Call it luck but that day was also the town’s feast day. For us Filipinos, what activity do we do when there’s a feast? Eat!!! hahaha… That same day we went house hopping we call in Filipino “Pamimyesta” (Feasting with), we hop from one friend’s house to another just to eat and chat with them – repeat cycle till full… errr not really even if you are full and you still got houses to go to you still need to eat. It’s rude not to eat when you go to someone’s home during a feast. 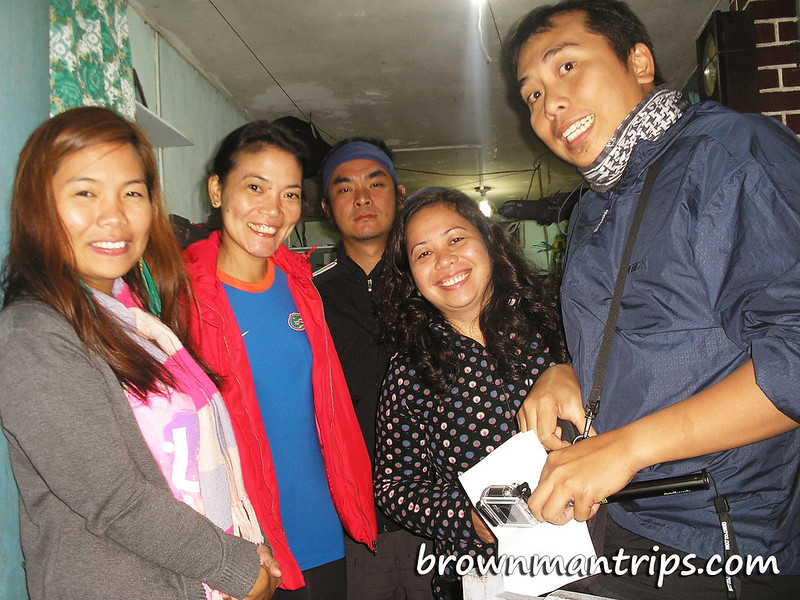 The first house that we went to actually was my favorite. It is a small house with few food types on the table but what was happening outside was something more. The elders of the household are taking shots, of course we obliged when they as us to take one. I learned that in Batanes gin actually trumps beer when it comes to sales. See, just like how the elders told us, gin or run for that matter, makes our body warmer compared to beer that just intoxicates us. With the cold nights specially during winter it just makes sense how hard drinks takes the throne. 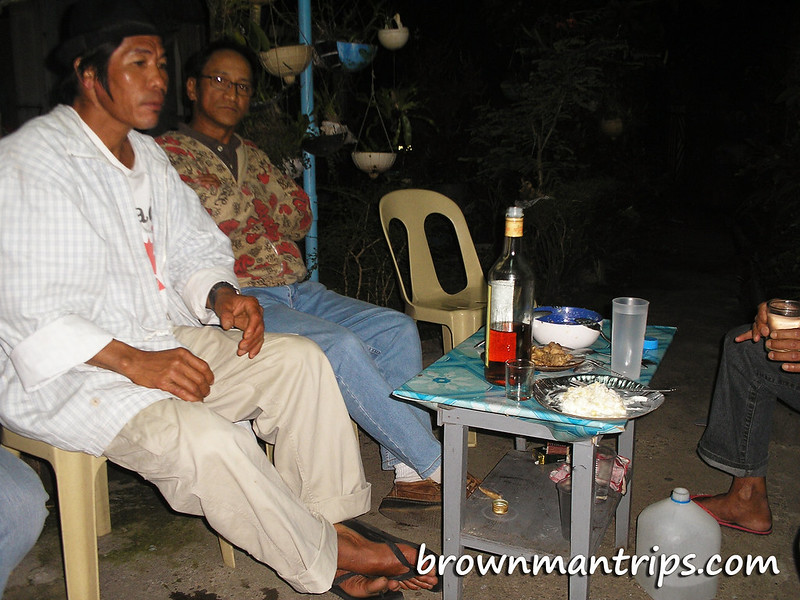 After feast house hopping, we went back to our inns. rested. but restless we are. Everyone wanted to hangout some more. My landlady didn’t knew that I was house hopping for food so she brought us a lot from her house. And I mean a lot!

‘Twas my first time hosting people, Ever! Thank God that they are really nice and friendly. We talked about of course travel and the funny and not so funny things that happen to us when we are out there. It was an awesome night, and food? Hahaha I had them take some home to their rooms so they can have it for breakfast.

It was a great way to end my second day in paradise, a good laugh with friends and a heart full of stories.