Let me start by saying that I have been attempting  to write about this trip since the day that I got back here in Manila. I’ve written several drafts and and over a dozen opening paragraphs but I feel my words aren’t justifying the experience, moreover, I feel that the photos that I have taken does not even show how beautiful the province is as most of them were actually just snap shots and not photos that I have taken time to compose properly because I was overwhelmed with the beauty of the place. Most of the time I’d just take a snap shot and then continue to gaze through my eyes, there were even times that I wasn’t able to take photos at all because I was like hypnotized!

So here’s my story to tell.

I’ve been dreaming of going to Batanes ever since even to a point that I thought that it was all going to be just left as a dream here in my head. I mean going to Batanes is really expensive, ranging between 15,000 to 20,000 pesos for a return flight, until Philippine Airlines launched flights going there and then I saw light! This is it! Without any hesitation I booked that flight with what was left from my allowance for the month telling my self ill forget about my weekly coffee doze for this I know it’s worth more than what I’ll be sacrificing for several weeks 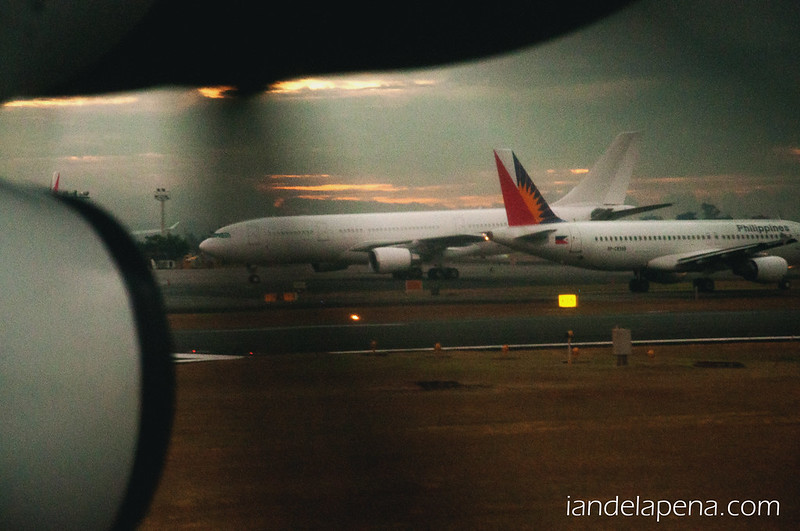 They say that Batanes is the only place in the Philippines that has more than two seasons, they have winter! I wasn’t expecting to see Frosty but something similar to the winter I felt in Taipei.

This was suppose to be a Solo Trip but having travel blogger friends  you’d always be in for a surprise. As I sit comfortably in the boarding area I checked my facebook and voila! Marky of Nomadic Eperiences was on the same flight as I am!

There are very few times that I feel nervous when traveling and this is one of them. This is something that I have been looking forward to for the longest time, one of those that you can call “Childhood Dreams”. I can’t really figure out what to feel. This is one of my dream destination! I don’t know what to expect or to expect anything at all. I have this thing that I try not to expect to see what I see on pictures because of most of the time they just disappoint me. 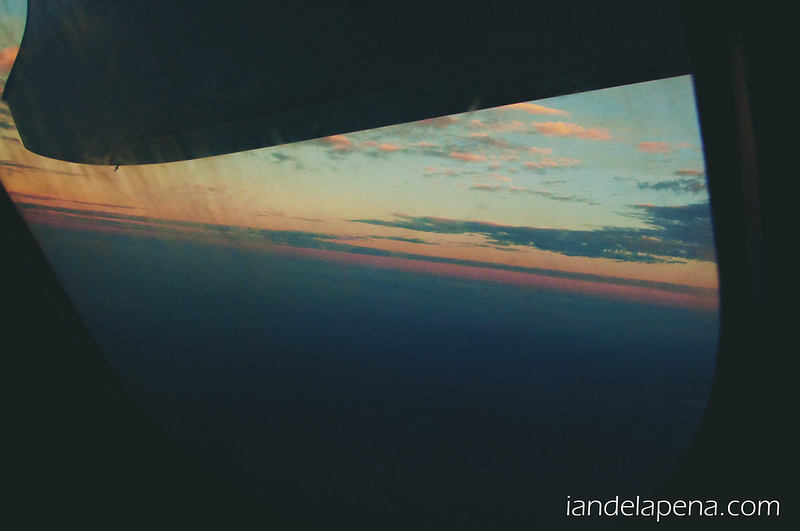 As soon as we landed it was like watching TV. Everything.Is.The.Way.You.Think.It.Would.Be!

The Basco aiport is small, but just enough. As soon as I got out of the arrival area I was greeted by familiar faces! There they were, Ferds of ironwulf.net and Chyng of No Spam, No Virus, No Kidding. There are more of us on the island. Ferds invited us for dinner at the Pension Ivatan for an authentic Ivatan feast. 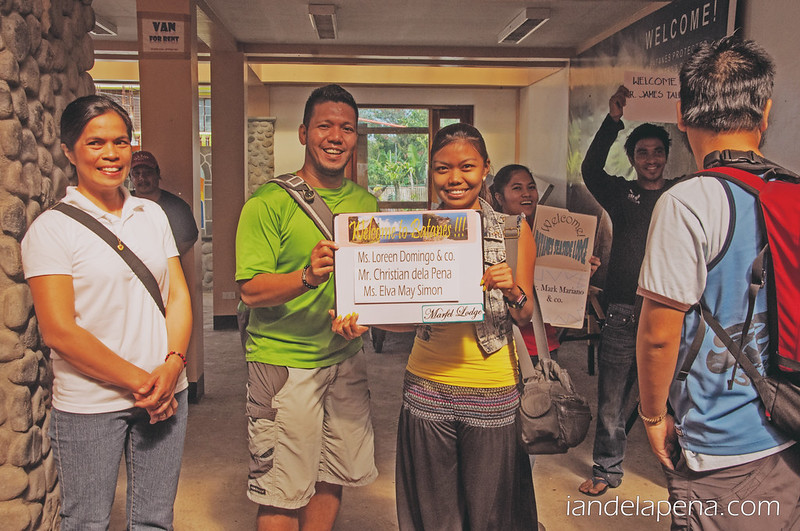 The inn that I chose to stay with picked me up with a van from the airport, after a few turns we were actually at the inn already! It was about five minutes walk from the airport! hahaha! I was like I thought that it was going to be far but hey, oh we’re here already! hahaha!

Marky and his friends down near the port at Shanedels. After settling in my awesome big room  at Time Travel Lodge I rented a bike and met them at their hotel’s restaurant. After eating a bit we went off to start our journey. Our agenda that  afternoon was to bike around the North Batan Island Tour loop, basically biking around the tourist spots up north of the island.

We first pedaled to the Basco Lighthouse up in Naidi Hills. Well truth is there wasn’t much pedaling that happened… hahahaha…. It was mostly uphill and trying to pedal all the way up is just ridiculous, I don’t wanna die yet! hahaha! We left our bikes on the last hill that we have to go up that leads to the lighthouse . 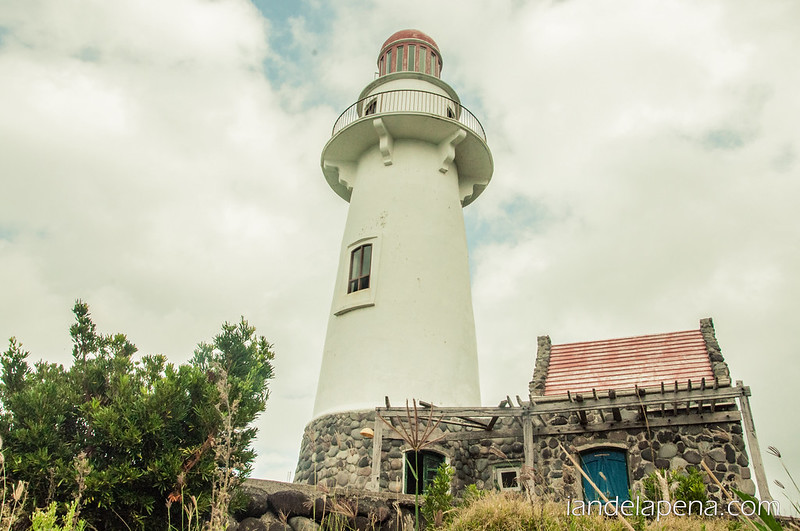 A final push with all of my will and we found our selves on top of the hill that gives us a great view of the town. All the pushing and pedaling way uphill was all worth it… ika nga may sukli ka pa. We spent the whole morning there taking photos and hanging out up on the light house admiring the view from the top.

The wind was blowing gracefully and you can just feel at peace with your surrounding at the lighthouse. Yes, I am struggling with words right now, like I said I can’t justify what I saw with what you see and read on this post. 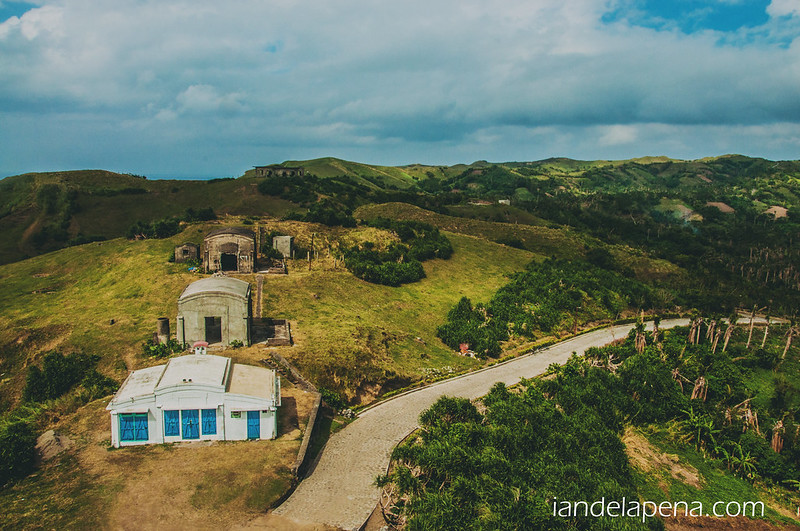 Of course going back down the hill was peanuts…. but at the foot of the hill another challenge was waiting for us the road to the Vayang Hills was another uphill challenge, I wish that I am speaking figuratively here….. but no…. Again we guided our bicycles with us and forget about pedaling uphill… hahaha….

The road seemed like it was never ending then to some point it felt like it was leading to the sea. 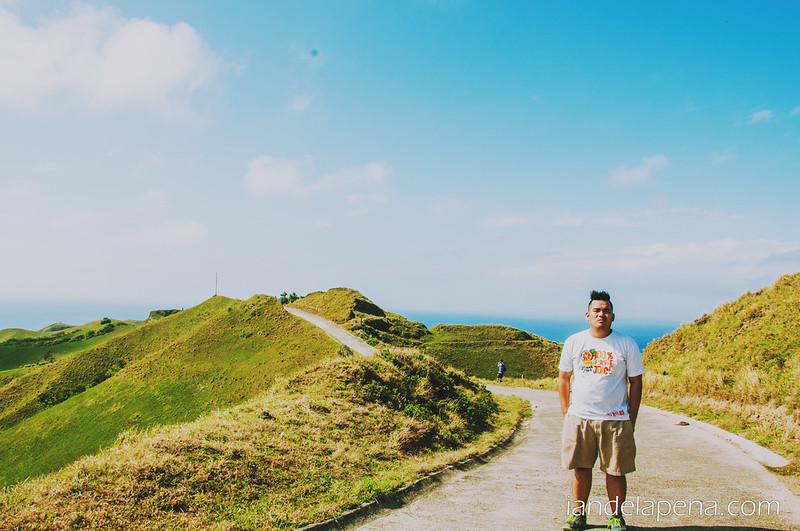 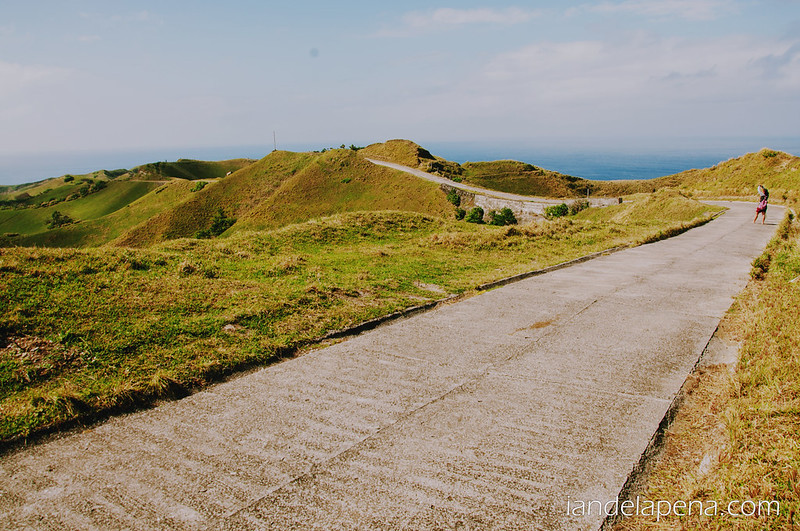 We… Uhm well at least I remember I was running crazy like people on the Sound of Music were, yep while singing the hills are alive with the sound of music! hahaha! The view on top of the Vayang Hills is really breathtaking. It’s like… damn… well like a post card… a painting… ugh… I just don’t have the words….

From the top of the Vayang Hills we road our bike like a roller coaster on the loose. No pedaling needed. The journey downhill was just a joy.

We rested for a bit, ate some snacks at a local canteen. The prices were kinda weird, vegetables were a lot more expensive than beef. I ate beef. hehehe.

After  packing up some calories in preparation for the rest of the day, we pushed forward with the Japanese Tunnel in our mind. We biked and pedaled through the road, with my lead they followed. I pedaled as if I know the place, I was confident. We were pedaling for about thirty minutes already, I think, when I thought of maybe we are lost already. I asked a local of the whereabouts of the Japanese Tunnel and was told that we have already passed by it. I then realized that we, actually just I, made  a wrong turn at the part area in the town proper that instead of turning right I turned left. 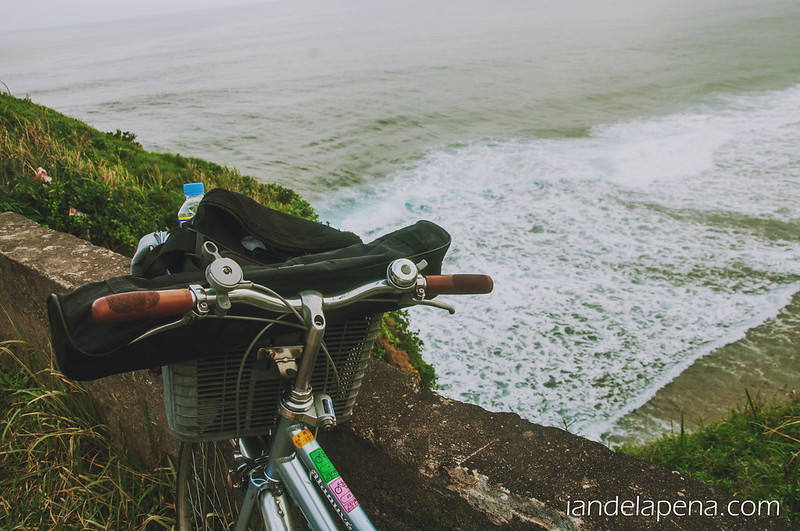 But we have pedaled far enough already and the town of Mahatao is soooo close. We decided to push through and bike all the way to Mahatao. The terrain was really challenging specially for the two of us who were using Japanes Bikes. Marky had a mountain bike. Dang! hahaha!

The road to Mahatao is simply one of the most picturesque, jaw dropping scenery that you’d ever see…. i’m just kidding, it’s more than that multiply to the power of inexplicability (yes I am using non-words already but I’m sure you get my point). I did not for a single moment regret our decision to push through. I even thought that it was a blessing in disguise to make that wrong turn! (I’ll post more photos of the route on a separate post) 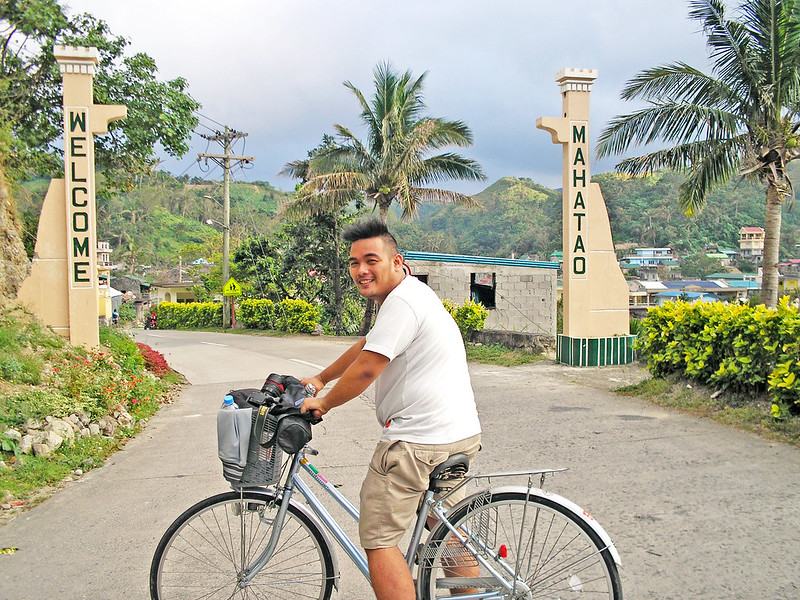 Mahatao is the next town after Basco in the island of Batan. It is much more quieter than the island’s capital. As soon as we saw a store along the road we immediately thought of having some snacks after biking and walking with our bikes for seven kilometers of mostly uphill terrain from the town of Basco. It was more of a reflex. We were tired but really happy of the sights that we saw.

After some refreshments, we pedaled a bit more to one of the heritage churches of the island, the San Carlos Borromeo Church. 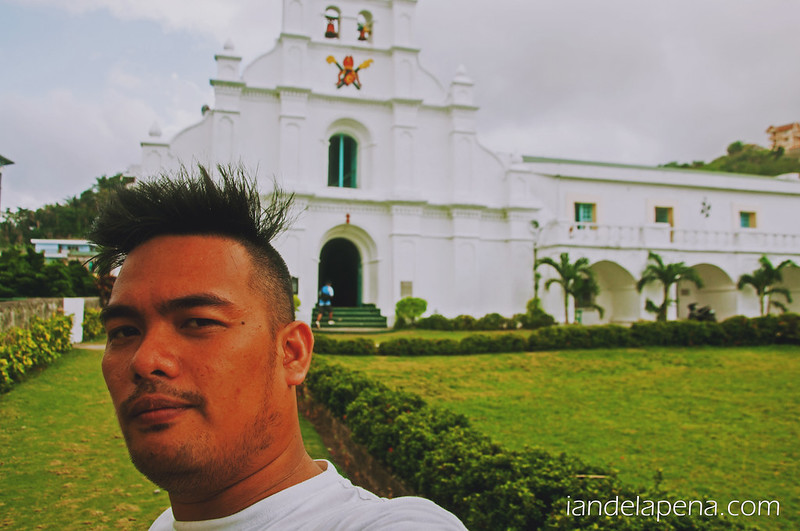 The Municipio is adjacent from the church. I can really tell not much about this town, but simply that it’s beautiful small and quite. So much of what we always look for in the urban jungle of chaotic cars and buses, while we feel so little from those tall buildings. Here you feel human. You feel that you are a vital part of the system and not just another part that can be easily replaced. Here you feel life. 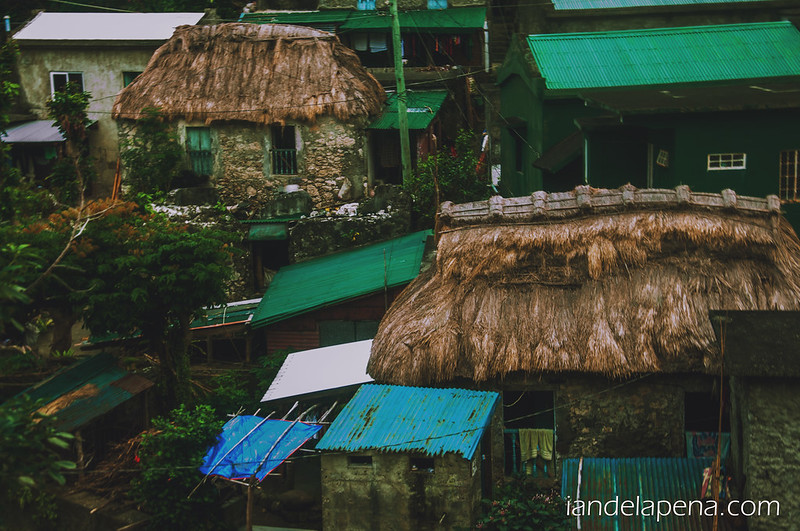 We explored the church and roamed around the community a bit more and decided to leave. We saw a signage pointing to a place called Diura. It is a fishing village that is famous for its dried fish that are also considered as an item that one can barter for an item within the village, not to mention its beautiful sunrise. We asked for direction and proceed.

The road to Diura is great because of the thick foliage on both sides of the road. We pedaled and pedaled until we notice that it was past four in the afternoon. It will soon get dark. We asked a local that was walking back to Mahatao if Diura was anywhere near from where we are. She replied that it was near already. We gave it a chance and agreed that it is five o’clock already and we are still on the road, that we will go back to Basco already.

Give some extra considerations when asking locals, specially when you are in the provinces. When they say that its near, for urbanites like us, it still is far. Unless the person that you speak with has an idea of what is near and far for city people. I am not being racist here ok. I am just making a  point. Defensive lang? hahaha.

Five o’clock came and a single house was not in sight. Still in the forest. We turned our bikes around and headed back to Basco. Then it occurred to me that we have a dinner appointment with Ferds! Well, I just thought, I am here and I’ll get there when I get there. I didn’t want to stress my self. This is a vacation. 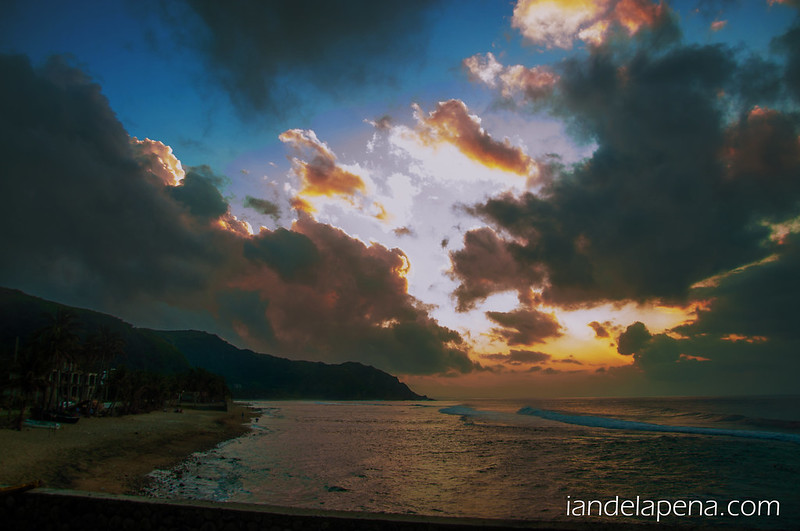 Lesser uphills and more downhill rides. Good thing there were three of us who biked. The road can be dark and scary at times, we were tired and we started walking more and more than pedaling on small hills. It was logical to do so. I actually felt tired and wanted to give up and just stay where I was standing or walking for that matter at that time. But I can’t. My companions gave me the will to carry on.

It was around seven in the evening. I left them near the port where they were staying and I headed uphill near the airport where  my lodge is. I changed clothes and went to see my friends on dinner at Pension Ivatan.